By Highlander’s arrival in 1986, MTV earned a foothold in American pop culture. Music videos found their language – and their influence. So it is that Highlander became an early example of the cinema-length music video, brash in its visuals and cryptic in storytelling. Highlander owes much the decade’s rock, beyond the soundtrack by Queen too.

Christopher Lambert stars, spending his time staring through the camera with inexpressive eyes, as many singers did during their videos (although they mouthed words; Lambert fits better on the album cover maybe). Cutting between historical Scotland and modern day New York, Highlander’s narrative sloppiness never feels solid, exploring the curse that is immortality through sword-fighting and romance.

Highlander speaks much of prizes and events, eschewing any grounded exposition

Spinning off into sequels, a TV series, videogames, and even an animated series, the disjointed logic dismantles this franchise, which took only a single sequel to upend its own rules; the writers didn’t get it either. Highlander speaks much of prizes and events, eschewing any grounded exposition, utilizing the visual space to tell this story. It’s often gorgeous, clashing the historic scenic beauty against the heavily shadowed New York concrete, all of this misty and hazy. The style speaks more than these characters.

Pinging Star Wars’ popularity, then setting it in a different fantasy era. Connor MacLeod begins Highlander unaware he’s special, earns training from a previously unknown older master, then takes up his sword against the villain to save the woman. Granted, Star Wars openly embraced familiarity; Highlander disguises itself behind glowing lights, electricity-laced clashes, and a grim city facade.

In brief moments, Highlander allows itself to laugh. Comic reprieves flavor this hardened “man saves the world” fiction that takes itself overly serious otherwise. There’s stunted fun over the runtime’s two hours, from cruddy weapons choreography to Connor’s awkwardness when living in modern times. But he’s no screen hero, pleading for a personality worth cheering for and a goal that even remotely suggests world-altering scale. Highlander provides neither, instead taking time to establish a flimsy backstory and wasting Sean Connery’s talents. 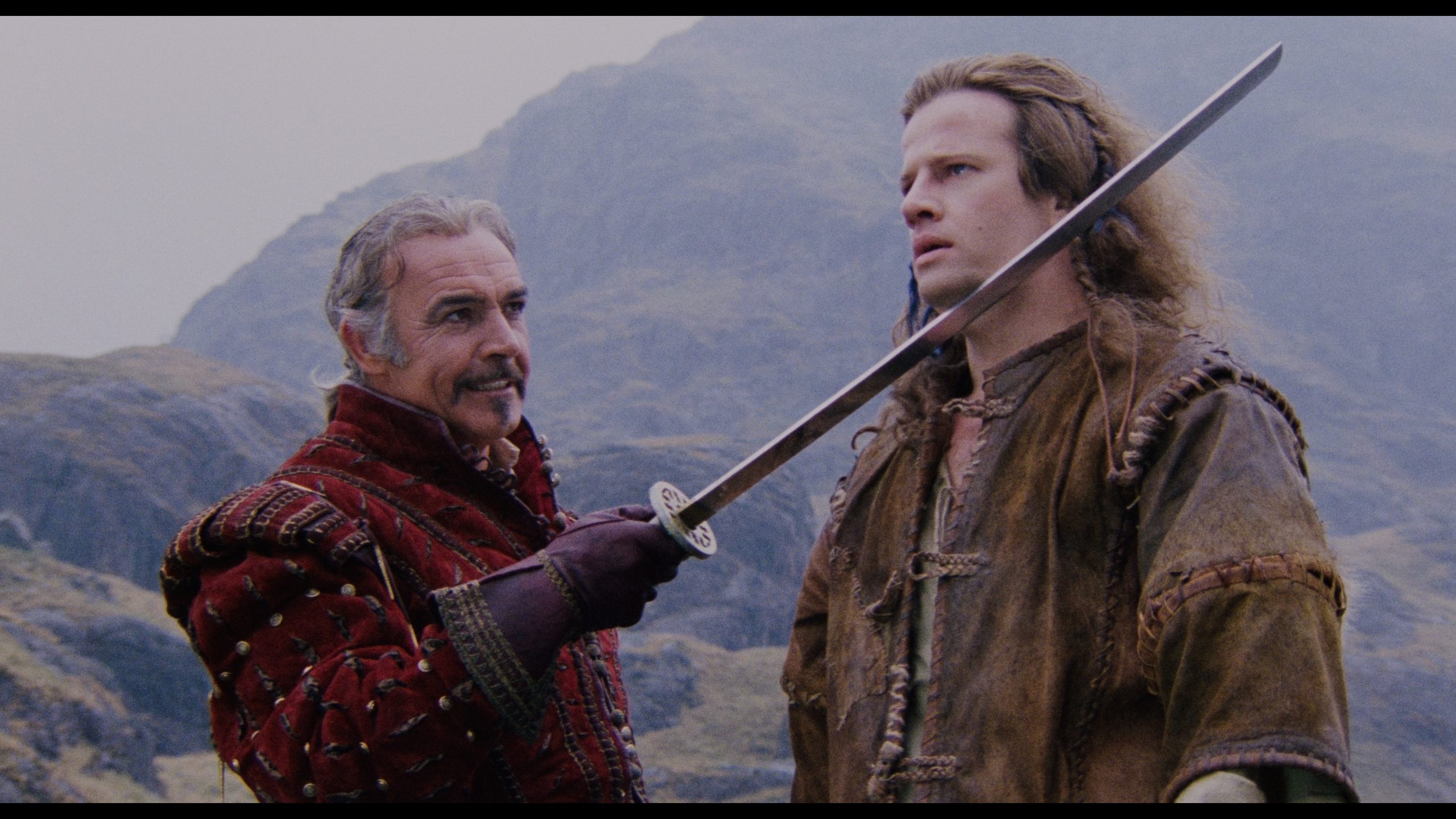 Lionsgate’s encode is a messy one, the only impediment to this otherwise superb presentation. Smoke and haze invites far too much chroma noise, struggling to resolve complex imagery (which Highlander features much of). This leads to a clear reduction in fidelity, even in close.

Stereo and 5.1 tracks appear in the menu. The best bet is the stereo. In surround, the exaggerated and piercingly loud rear channels hog the attention. It sounds fine during the opening Queen number, with music bouncing around the soundstage. Soon, the parking garage sword fight begins cutting into the fun, the sound too much and overbearing, which includes the muddy, puffy bass.

In 2.0, life is better, mastered well and accurately. The audio design resolves naturally, and offers a stereo split to add some directionality into the mix. Maybe the range isn’t impressive, but that’s better than the bloated attempt to make some in the 5.1 option. Fidelity does take a hit though, and at times, that’s a significant lapse. Scratchy, coarse dialog sounds as if totally unrestored, keeping static and hiss on the track.

The UHD doesn’t hold back on extras, spilling over with three commentary tracks. Author Jon Melville goes solo in the first. Director Russell Mulcahy is next. Then, Mulcahy joins William Panzer and Peter Davis on the third. A new hour-long documentary looks back on the film and its legacy, loaded with interviews. Next comes a 14-minute look at the soundtrack. Two interviews cap the disc, one with Clancy Brown, the other with photographer David James.

Highlander brought forth the music video era of filmmaking, and mostly for worse.