With all due respect to Eyes Wide Shut, Vanilla Sky sticks out in Tom Cruise’s filmography as his most daring and interesting film adventure. Reuniting with director Cameron Crowe (Almost Famous), Cruise ambitiously remakes the magnificent 1997 Spanish gem Abre los ojos by Alejandro Amenábar. The mind-bending thriller weaves dreams with reality in a hauntingly dark rumination on love, fame, and fate as reality twists around its central character.

Tom Cruise pulls in a superstar cast and Crowe assembles a world-class soundtrack for what becomes a stylish big-budget Hollywood rendition of the magical Spanish flick. In what can only be called kismet, Penélope Cruz reprises her role as the beguiling love interest in Abre los ojos for Vanilla Sky, her first serious English-speaking role. The Spanish actress would end up dating Tom Cruise for several years after making the film together.

Nothing is quite as it seems in the crafty Vanilla Sky, one of the most heady metaphysical trips Hollywood has ever undergone for a major motion picture

Originals from such acts as R.E.M., Radiohead, Paul McCartney, and Sigur Rós play a key role in Vanilla Sky’s edifice. Music is always such a staple in Crowe’s better films, he nearly matches the virtuoso song selection he had in Almost Famous.

An arrogant publishing scion finds his world crumbling into bitter regret when he loses the love of his life, or does he? Nothing is quite as it seems in the crafty Vanilla Sky, one of the most heady metaphysical trips Hollywood has ever undergone for a major motion picture headlined by one of cinema’s biggest stars. Cruise took a huge creative risk with Vanilla Sky’s twisting psychodrama, possibly revealing a little about himself in the process.

David Aames (Tom Cruise) is a hot-shot publisher in his 30s with everything going for him – looks, fame, wealth, and beautiful women at his beckon call. He quickly falls for the mysterious Sofia (Penélope Cruz), a dancer. David’s life turns into a disturbing nightmare when an old fling from before Sofia, deliciously played by Cameron Diaz, thinks she’s the only woman for him.

Fluid perspectives and shifting visions reveal David in a prison cell, charged with murder and wearing a mask covering his entire face. Kurt Russell plays a friendly police psychologist getting to the bottom of David’s confusion and emotional trauma.

Vanilla Sky has a densely-layered narrative which demands your close attention and spoiling anything more would ruin most of its great fun. The sharply-written story eventually provides coherent answers to the many mysteries in David’s life and troubling circumstances. Blurring the line between reality and illusion, it’s a wild ride which dives deep down the rabbit hole.

Reaction to Vanilla Sky was mixed, possibly a result of the studio and Cruise’s name selling the flick as a conventional romance between Tom and Cruz. Having already caught Abre los ojos beforehand and knowing the destination was much more complicated than a safely packaged Hollywood romance, I didn’t have those misconceptions. The searing drama plays out like a thriller packed with memorable dialogue, vivid characters, and dizzying shifts in tone.

My first take upon seeing Vanilla Sky opening weekend had me rank it a masterpiece of sight and sound, easily the best picture ever made by Tom Cruise. There’s a time when I would have placed it in my top ten, an intoxicating head rush of ingenious writing and skillful direction. My younger self overlooked some of its smaller deficiencies, blown away by its shocking final reveal which remains potent today.

Ironically enough, Tom Cruise and Penélope Cruz may be the film’s weakest links. Cruise is a good, not great actor, and you can’t help but wonder if his limitations take something away from the sublime screenplay. He’s good enough in the role while definitely leaving room for improvement. Cruz in her first major Hollywood role seems a bit uncomfortable, still learning the nuances of the English language. She was dazzling in Abre los ojos, so it’s not her acting chops I’m questioning.

Vanilla Sky is one of the more unconventional and electrifying Hollywood films starring an A-list icon made this century. There’s nothing quite like it, smoothly adapting a Spanish film for American audiences with all the style and verve Hollywood can muster if given a major star like Tom Cruise. 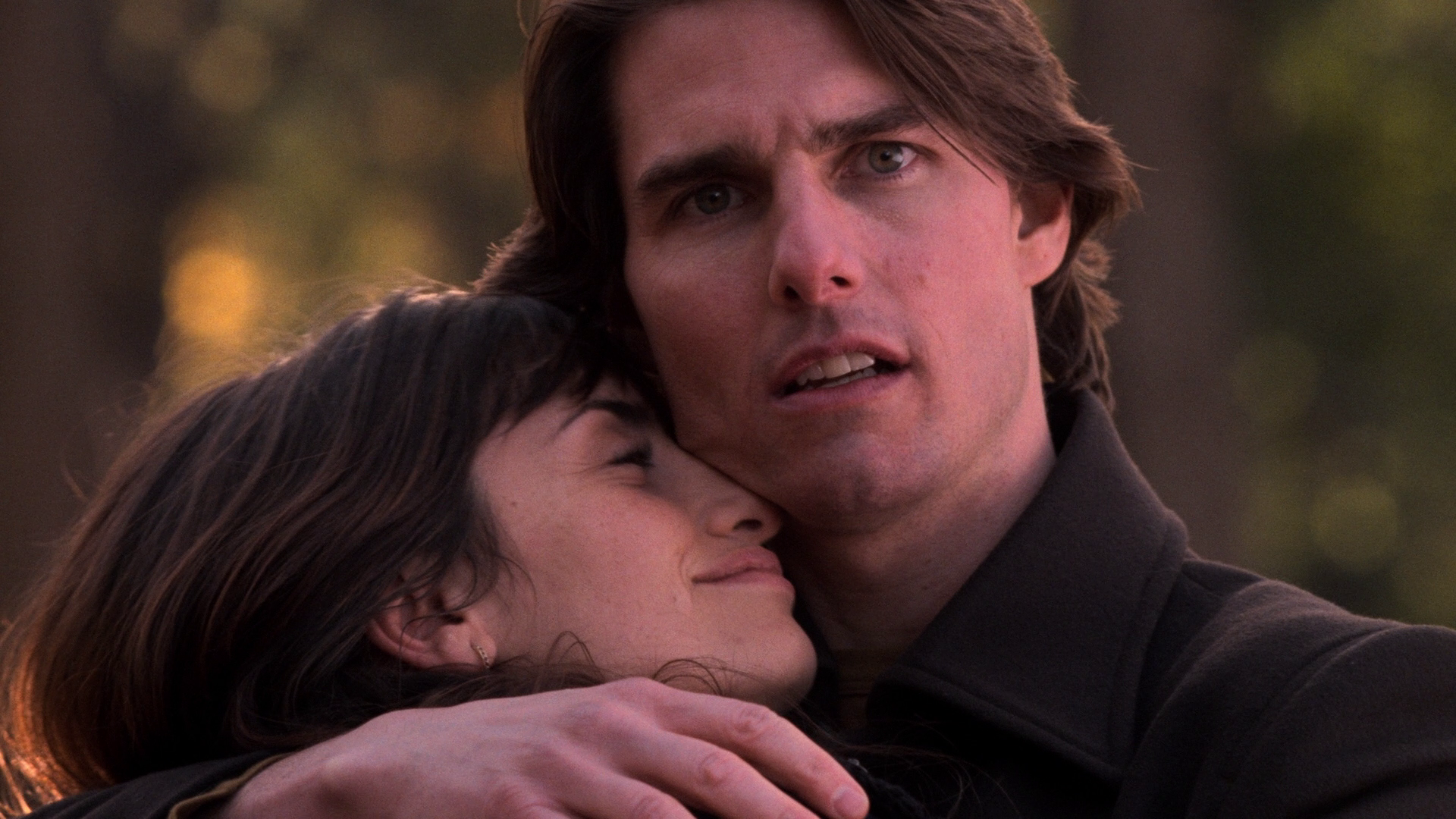 Oscar-winning cinematographer John Toll went for natural colors and reserved cinematography for Vanilla Sky despite a couple of show-stopping set pieces – including a completely empty Times Square done with no visual tricks. They filmed at the crack of dawn and shut it down temporarily for the movie. Detail has always been on the softer side with deep shadows and steady black levels. The contrast is consciously blown out by the filmmaker in select scenes.

Vanilla Sky’s picture quality has never been more than serviceable on home video, even when WB licensed a dated HD master from Paramount back in 2015 for Blu-ray. Paramount goes back to the original film elements for an updated 4K scan, reaping visible benefits in clarity and grading. People may ask why the studio would forego a UHD release when a 4K transfer with Dolby Vision has already been completed.

Skipping UHD tells me all I need to know what Paramount thinks about the movie’s inherent video quality. Vanilla Sky doesn’t sing with outrageous definition and razor-sharp detail, even in this new transfer. It’s a film-like transfer reproducing the soft theatrical 1.78:1 presentation, accurate but superficially less impressive than most blockbuster fare.I wouldn’t necessarily get upset they skipped over a 4K release on physical media.

The dreamier sequences remain on the gritty side with grain still present. Maybe a tick or two of ringing intrudes but overall an unfiltered transfer filled with solid grain reproduction.

A fine AVC encode captures the entire 135-minute main feature without problems. Paramount improves on the older WB Bu-ray with tighter film grain and more refined definition. The newer color correction hones contrast and skin-tones closer to their original intention. It’s a clear improvement over Warner’s disc based off an older master.

The soundstage is expansive with pinpoint placement. Vanilla Sky’s soundtrack sparingly pushes serious LFE content. Dialogue is intelligibly clean with strong dynamics for music. They are balanced neatly together and there are some inspired sound cues which smoothly blend them together.

Having already been available on Blu-ray before from Warner, Paramount reissues Vanilla Sky with one significant new special feature called Filmmaker Focus. It is #27 in their Paramount Presents line and comes in a clear slipcase with a deluxe fold-out slipcover.

The primary reason to buy this disc if you already own the Warner BD is the improved video quality. Everything else is ported over from the prior DVD and BD, fantastic material in their scope and depth. The commentary by Crowe and wife Nancy Wilson is a must-listen affair.

A digital copy is included which redeems in HDX quality on either VUDU or iTunes.

Alternate Ending (with optional commentary by Cameron Crowe) (29:45 in HD)

Mask Test (with optional commentary by Cameron Crowe) (03:23 in HD)

Deleted Scenes (with optional commentary by Cameron Crowe) (34:16 in HD)

Full disclosure: This Blu-ray was provided by the label for review. This has not affected the editorial process. For information on how DoBlu handles all review material, please visit our about us page.

Cameron Crowe’s Hollywood remake of the powerful Spanish gem Abre los ojos is an unsettling Tom Cruise vehicle with a top-flight cast, including a young Penélope Cruz coming along for an exhilarating ride.