It’s no surprise Ticket to Paradise got made. This studio fluff piece has great looking people in great looking locations, drawing on their star power to draw people into the seats. It’s easy. It’s simple. It’s profitable.

And, at times, Ticket to Paradise does entertain. Not always, but with George Clooney and Julia Roberts doing their mismatched couples routine, there is a certain comfort when watching them work. Filmed in Australia (but posing as Bali), the locale lets the duo have a blast, mixing business and pleasure that’s as much vacation as work.

Ticket to Paradise isn’t meant to unpredictable, nor does it try to be

Adventures happen that let the starring pair clash and reveal their animosity for each other in comic ways. The cynicism runs deep, digging into the core of why relationships fail, and the inevitable way they come back together. Traveling to Bali, Clooney and Roberts seek to stop their daughter from marrying, and their own division then causes their kid to reconsider… which ends exactly as expected.

Ticket to Paradise isn’t meant to unpredictable, nor does it try to be. Movies like this deal in the journey, where Clooney suffers a tragic dolphin bite, and the duo feud over seaweed farming. Those moments bring so-so laughs, if nothing compared to the wildly fun outtakes during the end credits – the easiest way to ensure the audience leaves satisfied. 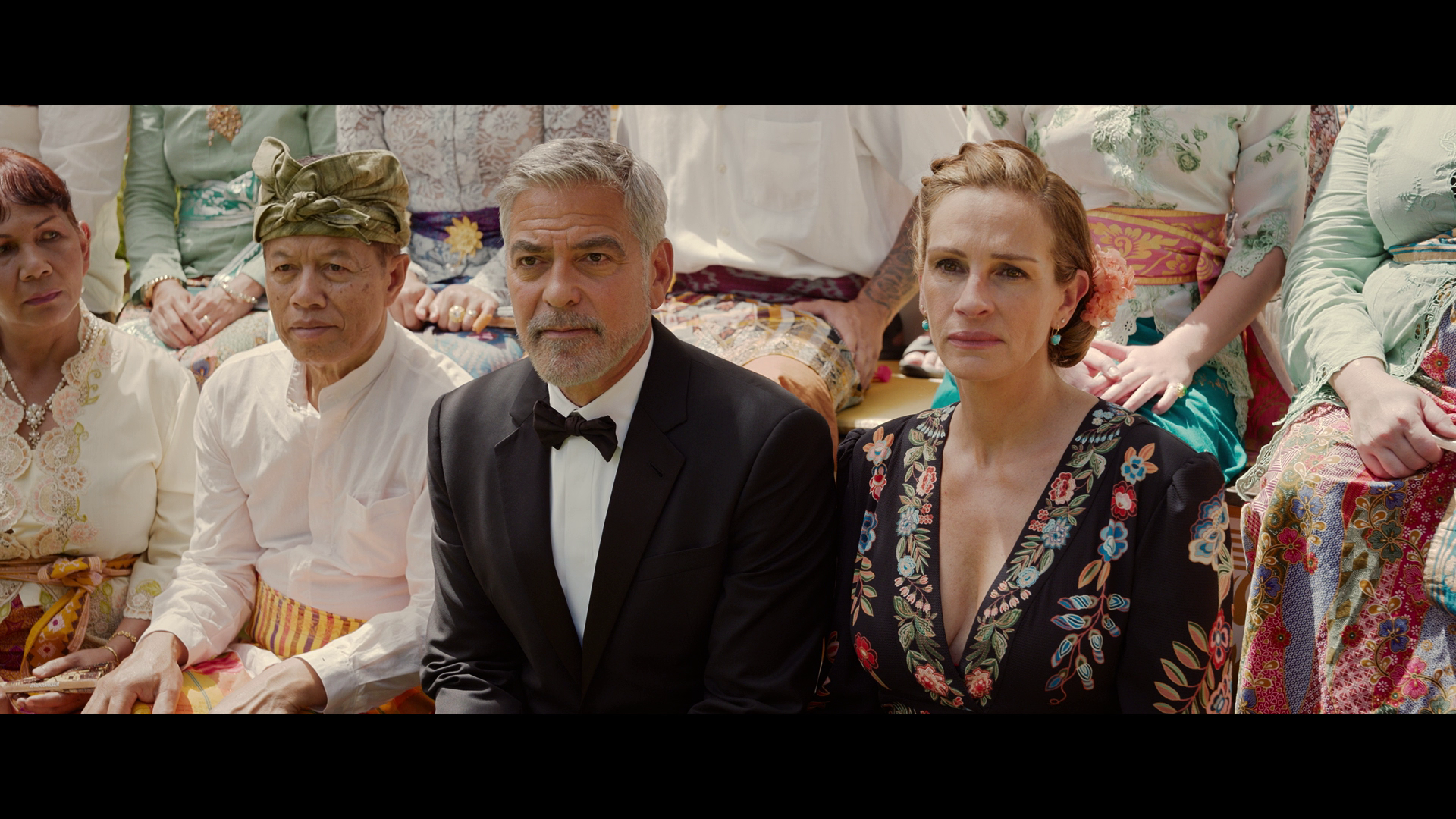 Oddly a fairly forgettable, middling transfer from Universal for this new release, lacking in resolution and that can leave behind aliasing on numerous surfaces, from clothes to hair. Medium shots hold a rugged appearance that’s rare for a modern digital production. Granted, it’s spectacularly clear, avoiding noise entirely. Yet, detail remains at a premium, and ringing shows up in a few instances to muddy things further.

Location cinematography helps though, exploiting the naturally rich color from the water, trees, and sand. Ticket to Paradise brings out the hues in all of them, splendidly saturated, bold, and also still natural. Grading elevates primaries, but doesn’t overdo them.

Black levels take on a blue-ish hue in certain places, but generally hold their density. There are no such concerns with the contrast, and it’s a shame Ticket to Paradise isn’t getting a UHD release to exploit this via HDR. Still, it’s plenty bold, and it’s hard to think of what HDR might add.

Choosing the not-quite Atmos DTS-HD 7.1, that’s still a lot of audio for a tiny rom com. Beach scenes utilize the scenery when a small breeze filters through the leaves or the water splashes onto the shoreline. Waves are a constant anytime near the ocean.

Bass isn’t prominent, although the score/soundtrack does blitz the subwoofer at various times. There’s also a rough plane ride that rattles the room for a brief instant; turbulence causes a ruckus.

Four fluff featurettes start with a look at Roberts and Clooney’s role, another on the wedding set, followed with a location shoot piece, and finished off with a two-minute bit on Billie Lourde/Kaitlin Dever. Total runtime? maybe 15-minutes all together.

Safe and fluffy, Ticket to Paradise hits every predictable cliche on its way through rom com norms.