Coraline’s parents work excessively. Having moved into a new house, without any time to even stock food and on a deadline for their magazine, Coraline has to contend with doing things herself. Certainly, her situation is a relatable one.

The storytelling’s subtlety broadens to define a parent’s love. Naturally ignored and treated like a burden, Coraline enters an “other” world where her parents make endless delicious food, gifts are numerous, neighbors perform spectacular shows, and the outdoor garden glows like an ocean overflowing with bio-luminescent creatures. No wonder she’s infatuated – she feels loved in this other place.

For Coraline, the strength lies in how the script slowly weaves distrust through the title character’s mind. Her “Other Mother” provides, but does so out of a need to control, not love. It’s a difficult lesson, showing that attention or gifts are not a sign of parental bonding, and stress-laden adults often need to focus. Coraline learns not to think only of herself as she enjoys the easy-going childish pleasures like free cotton candy. She eventually learns her friend can no longer speak, a selfish trade for her happiness. It’s a complex lesson.

The result is an enjoyable fairy tale, intelligently composed as to never lose the important message amid a visual extravaganza. Generous as Coraline is in developing characters and the world, stop motion produced by Laika defies the medium’s usual restrictions. It’s so glossy, so bold, so eccentric, and so detailed, focusing on just the story and not the artistry directly is a challenge. With some 60 mice dancing for a circus act partway through, the level of work involved blows the mind.

Add in the color, the music, and sound, Coraline becomes an absolute feast for multiple senses, this while exciting the brain via the intricate narrative style. Coraline remains a stop motion high point for the art form itself, an astonishingly beautiful and cautionary fable that’s rare to create so successfully. 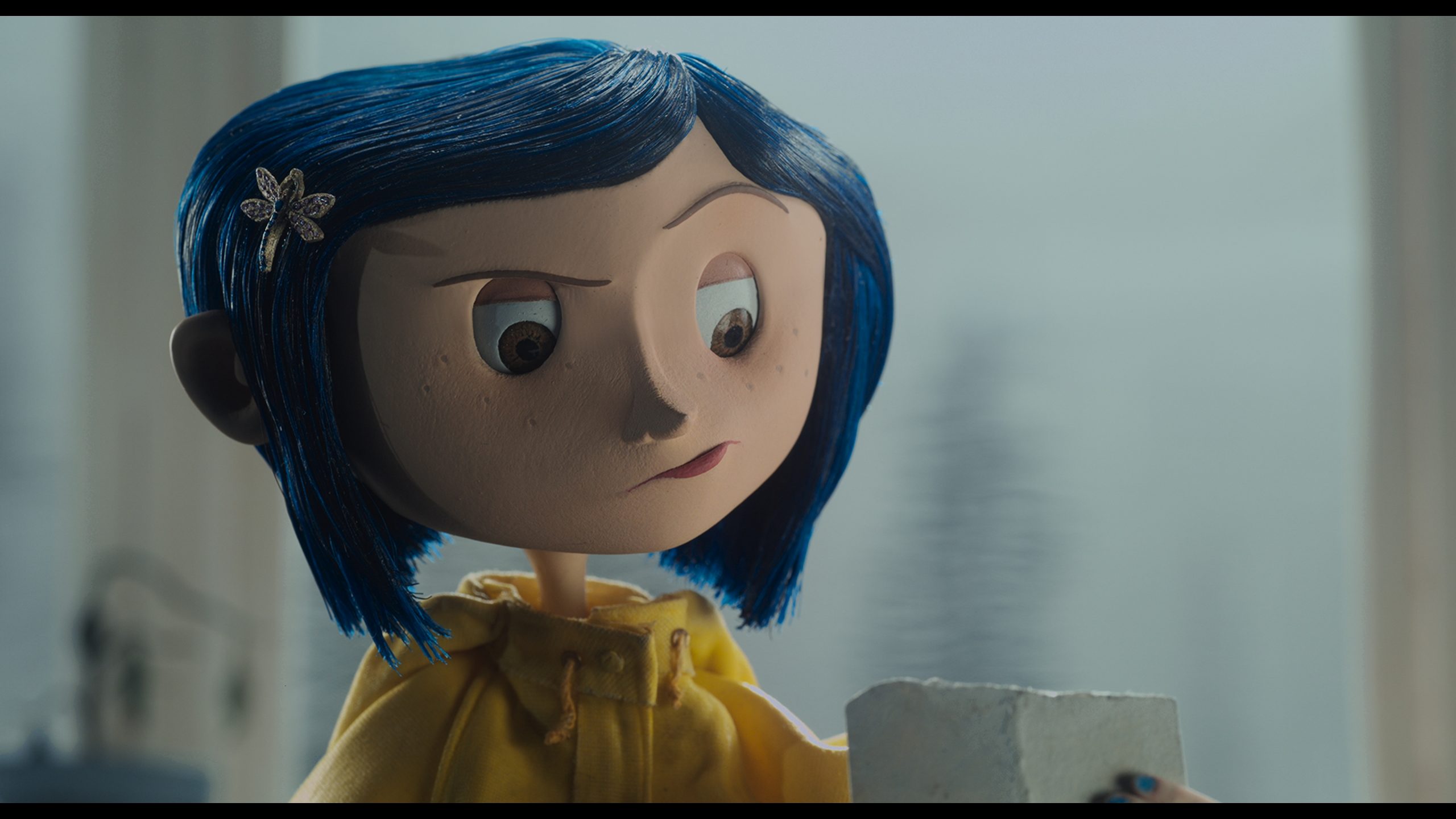 Shout Factory notes a new 4K restoration for this release. That’s likely true, but this isn’t a native 4K presentation, rather an upscale as the digital source offers no additional information from the original 2K finish. Sharpness looks enhanced, giving Coraline an unnatural edginess. Not sharpened, just impure. Slightly. And enough to leave ringing artifacts behind. But again, slightly. There’s even shimmering where not intended (also slightly).

Detail still comes in droves, from hair to clothing. Texture on puppets is never at a loss, while miniature environments show equal fidelity. In terms of improving over the Blu-ray though, Coraline is only a marginal upgrade. This is especially true in wider shots where the edginess sours the imagery.

Source material shows a persistent noise, typically unobtrusive, although a few peaks give the encode challenges. That’s minor. Color saturation poses no problems, with bold, dense primaries standing out against a wide, varied palette. From Coraline’s yellow raincoat to her other clothing, every hue presents with vividness. Once into the outdoor garden, lit up and blooming, the visual boost more than justifies this release, even if it’s a close call.

Also note the occasional dead/stuck pixel in the source material.

Coraline brings opportunity for an Atmos remix, and Shout takes full advantage of the moment. Surrounds prove prominent, from stretching the music to enveloping the soundstage via rain, storms, and other ambient effects. The real work happens in the heights though, especially with the flying creatures. Whipping overhead, any chance to offer Atmos effects is taken, and it’s often. Even the music creeps into the added speakers, bringing additional space to an already grand home audio disc.

Range delivers on the low-end, producing the expected bass. There’s variance, from soft touches during tender moments, the music helped along by a light strumming. When Coraline veers toward horror, bass intensity increases to a sustained, thick rumble. Action scenes provide jolts galore, and they’re not subtle, rather room-filling shaking, the best being the “other” world’s collapse after Coraline finds the third eye.

Director Henry Selick brings composer Bruno Coulais with him on a commentary track, kicking off a fine set of extras (which reside on the Blu-ray only). Two Inside Laika featurettes include key interviews while focusing on the characters in the first, and the second revisits the puppets, split into seven segments annoyingly given their short length.

A selection of deleted scenes (mostly finished) includes edited introductions from Selick. A making of is split into 10 segments, and runs for a bit over a half hour. Two extra featurettes, one on voicing the characters and another on the film’s creepy factor should have been included in the making of. All of them offer solid insight, despite the usual round of (deserved) self-congratulation.

Coraline approaches a difficult topic for kids with a colorful, imaginative world that’s almost a miracle in its execution.