Carrie doesn’t skimp when projecting author Stephen King’s worldviews. A vocal liberal, Carrie’s range is sourced from a sadistic, abusive Evangelical upbringing. From the time she was born, Carrie’s mother (Piper Laurie) viewed her kin as a sin. Her entire life, mom treats Carrie (Sissy Spacek) as a gross misjudgment that needs cleansed, and never once teaches her life’s basics.

While Carrie seems obvious in its slant, the focus hones in on social cruelty, using high school melodrama as a source to enrage the title character. Carrie’s debauchery involves underage drinking, sex, and teenage rebellion, all just as ruthless as mom’s abuse. Beyond bullying, what Carrie experiences is assault, and in lashing out, she’s neither hero or villain; hardly anyone in this movie carries those banners. Instead, she’s a survivor, the best outcome she could hope for.

Watching Carrie in 2022 is relentlessly uncomfortable

Especially sinister now, watching Carrie in 2022 is relentlessly uncomfortable. Here’s a girl reaching her limit, then burning down her school using psychic powers. Fantastic and supernatural tinge aside, that rage resulting in heartless violence feels all too authentic now. Carrie is less horror than drama, even in the fictional extremes this story goes to; the hatred looks and feels all too real.

Spacek and Laurie were given Oscar nominations for their roles, both deserved. Spacek’s reserved performance in the first acts makes her uprising later gut wrenching. Laurie’s increasingly unnerved panic happens organically, and her crazed eyes during the finale avoid succumbing to schlock or camp – it’s believable.

The decade’s cinema wasn’t kind to religion on screen. Genre efforts like Amityville Horror and God Told Me To dealt with Christianity’s dwindling influence in a progressive society, and Carrie joins this lot. Each brought a new twist to the formula, presenting sharp social views, decidedly and unrestrained. With Carrie, it was cruelty in the name of a higher power, how fear can control and alter people for life. That’s Stephen King’s contribution, and Brian De Palma’s film adaptation doesn’t shy from those words. 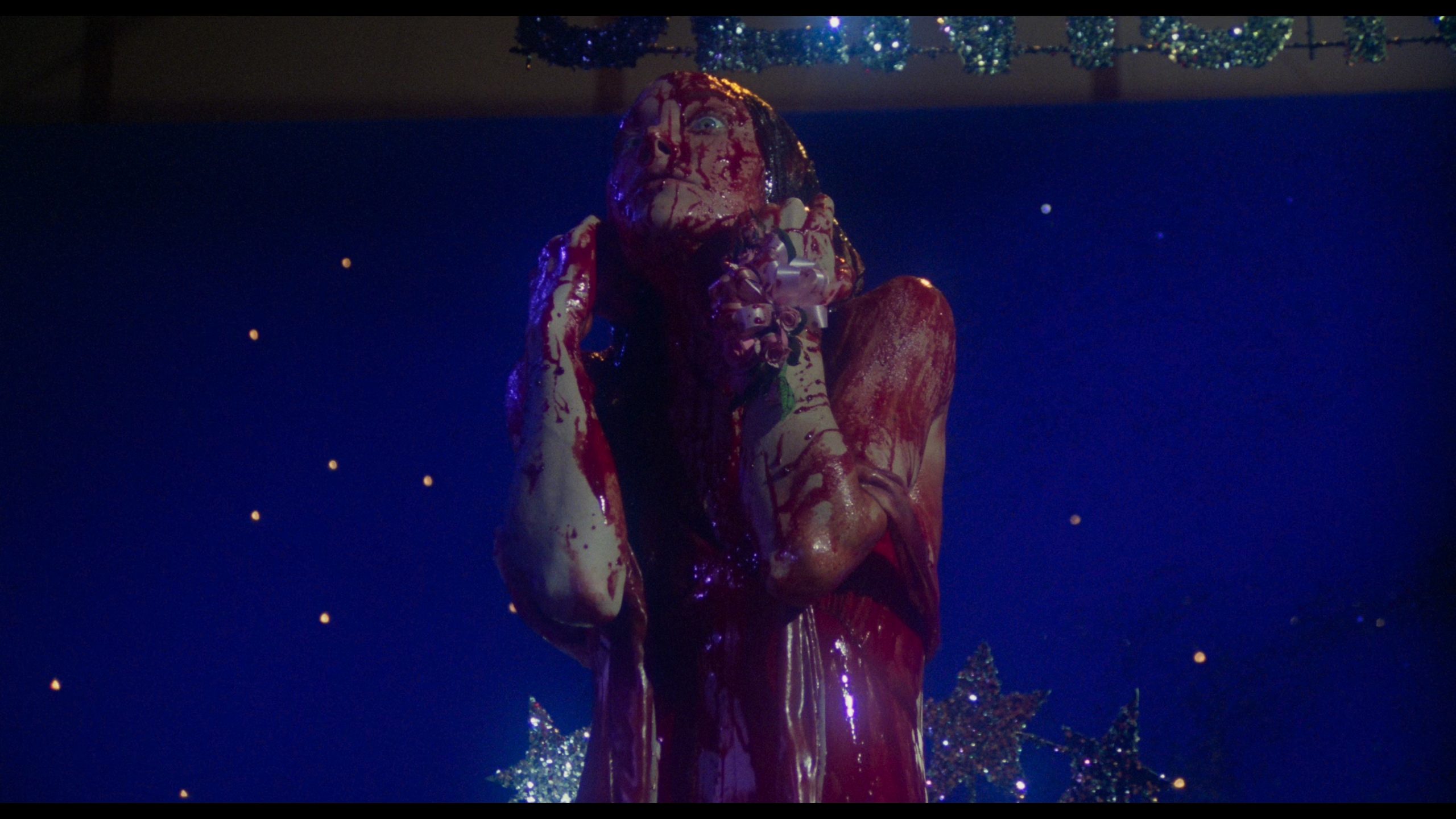 Newly remastered for this release, there is one misgiving: Color. The push toward blue, readily apparent in the principal’s office after the opening credits, looks wholly digital. That coolness is aggressive, robbing the contrast and altering primaries. Alternatively, an amber push causes flesh tones to bottle up at their deepest tones, lacking nuance and muddying gradients. Carrie suffers from lessened vibrancy than what’s likely possible due to this altered palette.

Everything else looks sublime. Grain preservation doesn’t challenge the encode, the disc able to keep up. Steamier cinematography means sharpness doesn’t pop out like other masters, but it’s there behind the mist. Fidelity, detail, and texture shines where possible within this 4K scan.

Dolby Vision does what it can, but as stated above, color grading sapping brighter elements of their zest. Not everything lacks vibrancy, say candlelights in the home. Prom brings sparkling dresses, silver-y star decorations, and a disco ball. Black levels drop low, if not to pure black. There’s enough firmness to create dimensionality though, even if the contrast falters.

That’s a decent upmixing, but comparatively, dialog sounds overly bright, even forced through the center. Sparingly used rear channels hardly make the mix worthwhile over the others. Rain comes from the surrounds, and music will stretch outward, but that’s it.

Scream Factory issues a three-disc set, the first being the 4K disc with a commentary from author Joseph Ansenberg, then a Blu-ray with the movie, commentary, and trailers, and finally, a third bonus-heavy disc. Interviews galore fill the space, including writer Lawrence Cohen, director of photography Mario Tosi, editor Paul Hirsch, casting director Harriet Helberg, composer Pino Donaggio, and three multi-interview featurettes. Another bonus visits the shooting locations, there’s a look at the musical adaptation, and massive promo galleries that are actually worth the time to look through.

A fervent, hyper-exaggerated slant against religious fanaticism, Carrie is able to balance that with a fatalist worldview.