Hamburger, Fries, and a Coke

The equivalent to watching Creature from Black Lake is sitting for a series of crummy campfire stories about bigfoot, each dwindling what limited patience each listener has. The oddly named Pahoo (Dennis Fimple) and Rives (John David Carson) speak to the locals in Oil City, Louisiana about their experiences, many spilling elongated tales that chew through screentime.

Pahoo and Rives enter the town from Chicago, looking to research the mythical creature. That means simple confrontations between southerners and Yankees, both distrusting of each other, and occasionally, Sasquatch kills people. Painful subplots drift into romance, killing more runtime with no discernible plot consequence.

Post-Jaws, Creature from Black Lake looked to market itself on the back of that shark

There’s slight redneck horror at work in Creature from Black Lake. An elderly drunkard deals with a loss caused by bigfoot as these character archetypes often do, rambling and ranting as no one believes him. The town’s fear is northerners framing them as hicks, but citizens like that tell the story themselves.

Creature from Black Lake ends on a man vs nature conflict, the University of Chicago scholar forced to stare down the missing link he came to study. Even that isn’t exciting though. Man-in-suit effects seems passable, but he’s photographed between edits or at such a distance, it hardly matters anyway.

Post-Jaws, Creature from Black Lake looked to market itself on the back of that shark and a slight boon in bigfoot culture. Now, it’s a plodding, frustrating, and irritating low-budget exploitation example, minus the forceful (occasionally interesting too) subtext about preservation common to ’70’s era creature horror. 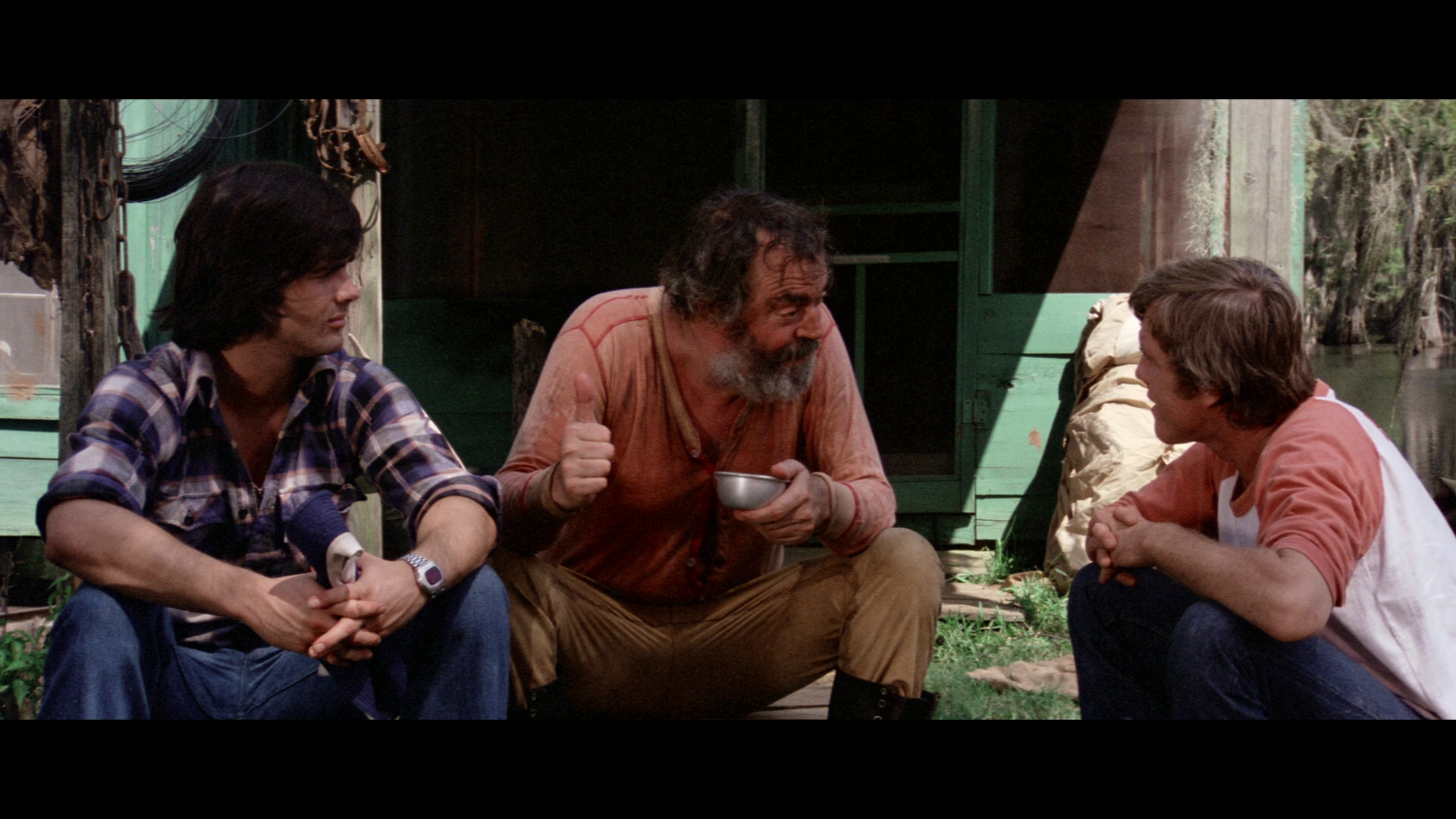 Ludicrously sharp, pristine, and glossy, Creature from Black Lake shows extreme texture and detail throughout. Close-ups draw out the facial detail, and wide shots define the forest as if magic. Grain isn’t consistent but it’s well handled and controlled by the encode.

There’s barely a scratch or speck left on this vintage film stock. Pinpoint black levels crush but only when at their darkest zones; that’s unquestionably the source material. Contrast does spectacular work when possible. Sunlight glistens from the white van and other surroundings, still controlled as to avoid clipping, yet pleasing.

It’s rough going for this audibly old and cheap recording. At times, dialog is almost completely lost, like when in a crowded hallway at school or a noisy exterior. Worn down mono keeps the source as-is, and at least uncompressed in DTS-HD. Forget any real range or fidelity.

A 19-minute interview with director of photography Dean Cudney joins the trailer and a TV spot. In the audio selection, you’ll find a commentary with scholar Michael Gingold and historian Chris Poggiali.

A tiresome, patience-sapping bigfoot flick, Creature from Black Lake tries even the most forgiving movie watcher.