On A Fire Extinguisher Ride

“Where Pixar’s films often speak to kids about working together, Wall-E chooses instead to put a generation on notice. It’s ironic. After seeing Wall-E, kids will rip open cardboard packaging to maul the well-marketed plastic figure inside, discarding the box. Out of sight, out of mind, and that’s what Wall-E smartly seizes on. Sent into space (for love of course), the expressive robot finds a humanity distanced from their ancestry. A plant is an alien concept. The comfort we seek in an exchange for ever greater disaster happens each time a garbage bag hits the bottom of a can.”

Disney themselves issued Wall-E on UHD previously. This appears to be the same transfer, just with a Dolby Vision layer in addition to HDR. To what effect that makes, short of a side-by-side comparison, is anyone’s guess. Sunlight filters through the smoggy Earth sky, and once into space, star clusters glisten and flicker. Any light source reaches a suitable peak, and if backed by the intensely deep shadows, the depth only grows further.

The now 12-year old textures can’t show much beyond what the Blu-ray did. That doesn’t mean definition lacks; it’s gorgeous. The rust on Earth is spectacular. Near the end, as people turn into rounded up cattle, each character is visible – hundreds of them. Sharpness is high enough to allow that to happen, including minor aliasing likely part of the source animation.

Although balancing two restrictive palettes (one brown, one blue), certain elements successfully break out. Lighting billboards create a space-faring interior. Red onesies worn by people gain energy, while the trip through space is truly stunning as clouds and nebula appear. 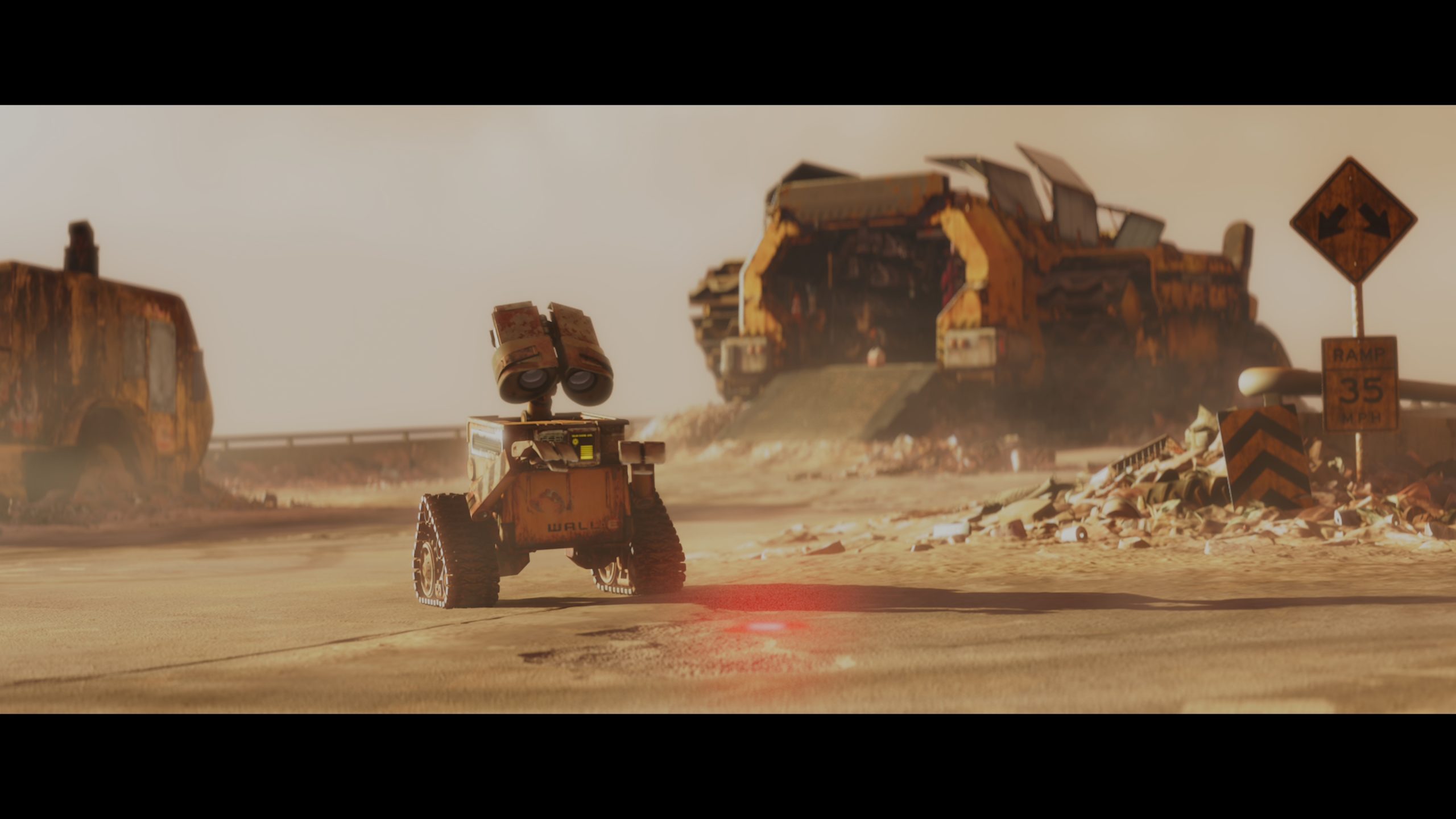 A few blasts stick out in this Atmos track. When ships drop to Earth from space, thrusters leave their mark with a solid rumble. An escape pod launches with a pleasing thud too.

Small touches add space to the original 5.1 mix. Wind storms push debris all over, above, behind, and to the sides. Robots move about, and the space port’s busy streets send flying chairs whipping by. Rain will plop into the overheads, if to limited effect; it’s mixed organically as to not standout.

The third disc is flooded with featurettes, some new, some old. The first menu selection has 11 selections focused on the creative process(es). A look at Wall-E’s various future prediction and ads for BNL are held in the “Prophecies” section on the disc. A triple stack details the robots, including a full storybook for kids. Finally, two short films look at Stanton’s earliest days in animation. A Story includes an intro from Stanton and to note, it’s completely restored, seemingly at full 4K.