Son of a Nutcracker

Elf is a one joke movie. Buddy (Will Ferrell) was raised as an elf but in actuality is just human. He discovers this at Christmas – convenient for the story – and oblivious to everything, heads to New York to find dad. On foot. He walks there from the North Pole.

Ridiculous and fantastic, Elf’s hook is that everyone knows a Buddy, that family member or friend who has the Christmas tree up before Halloween is over. The one obsessive about decorations, who bakes the cookies, and sticks so close to tradition, to ruin any of them is to crush their heart. That’s Elf.

Buddy never lost his drive; he never had the chance for his Christmas dreams to be shredded. His dad (James Caan) lost those feelings decades ago. Elf captures the necessary two halves, the joy and the sorrow, able to hide a derivative, cliché, wimpy story about an overworked father connecting with his son. The twist is purely Buddy’s isolation, and it works.

Elf, like Buddy, doesn’t stop. Revisiting the types of Christmas movies, and Elf is all of them. Drama, comedy, nostalgic – Elf hits them all, not just one. It’s a heartfelt tribute to ‘40s, ‘50s, and ‘60s era Christmas entertainment, whether Hollywood or TV. Elf’s world embodies them all, an amalgam that pays direct tribute to animated specials and It’s a Wonderful Life’s emotional closing chapter. And, it does so subtly, whether a camera angle or small dialog throwback.

Will Ferrell’s inspired casting means his manic comedy energy fuses perfectly to Elf’s continual chaos. He’s loud and obnoxious, but in an infinitely huggable way. He’s so ludicrously happy being himself, seeing him hurt (even as he discovers a distaste for coffee) brings out a tiny emotion. Buddy’s the best. 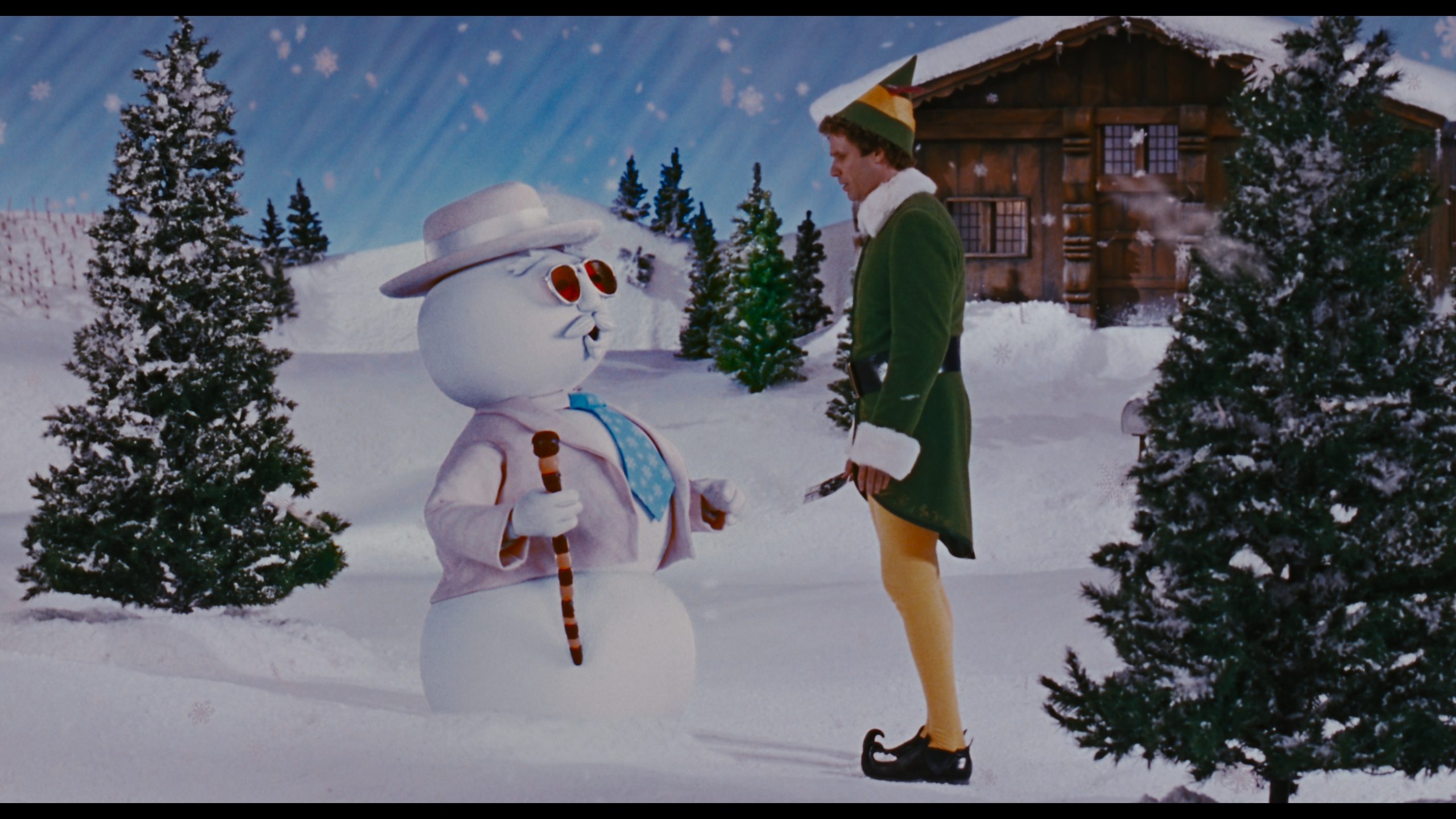 Making up for an awful Blu-ray, Warner remasters Elf properly. Minor grain preserved, Elf now shows plentiful detail. All of the elves’ wool costumes look spectacular. Their hats, their fur, their tiny decorations all show definition in droves behind a perfect encode. The resolution boost is sublime. Outside of effects shots (reducing detail and sharpness), this is perfect.

There’s a hefty dollop of contrast. Snow has bite, and tinsel shimmers under the lights. Christmas lights on the Rockefeller tree hit a massive peak brightness. While not frequently used, black levels play their role equally so. Shadows hit pure black and don’t deviate.

Sticking with DTS-HD – same as the Blu-ray – the music does some heavy lifting in reaching the low-end. Bass strums bring their weight to the subwoofer, giving the score kick. The finale involves Santa’s sleigh engine, and that’s a boomer too as it fires, or when the sleigh hits the ground.

Ambiance inside stores on streets fills the rears consistently. Movement isn’t exacting, but happens when absolutely needed. The snowball fight is a highlight, with whipping sounds akin to a war movie.

On the UHD, two commentaries. One comes from Will Ferrell, the other Jon Favreau. The Blu-ray holds a pop-up fact track, along with the other bonuses (and do note it’s the exact disc as before, same ugly transfer and all). This includes 90-minutes of featurettes, deleted scenes totaling 11-minutes (with Favreau commentary), and karaoke.

Elf’s delight stems from its pure, cheesy cheer, and every family has one. Maybe two.