What Watch? Such Watch

Each spoken word in Casablanca represents how everyone wished they talked. Those lines deliver such sterile coolness, comfort, and intellect, they retain a memorable quality, their age nonexistent even as the language progresses into new eras. It’s not only Bogart either. Everyone in Casablanca speaks around their intentions, and the only known truth is their shared defiance against the German regime.

Casablanca is relevant showmanship, raw, romanticized Hollywood on the precipice of war, defying a nation determined to remain neutral. Pearl Harbor happened not long before Casablanca entered production in 1942, by happenstance making the film an all-the-more powerful motif on ambivalence toward a common foe.

Rick (Humphrey Bogart) acts as a silent hero, smarter than anyone realizes. He helps where he can as his public face presents a man utterly indifferent to the encroaching German war machine. Yet, he’s no different than anyone else, trying to survive and pacify the Nazis, all the while escorting people through to safety. It’s true for Inspector Renault (Claude Rains), playing his position as if truly lawful, if forced to concede to German demands.

Cafe Rick’s is the nation’s hub for anyone seeking relocation or asylum. Mostly, that occurs in the background. People hover around Rick’s all day looking to profit from the desperate. Rick doesn’t stop them; that’s just good business. It’s a known entity. But the more time Rick faces his past, the more empathetic he becomes.

It’s the romance that solidifies Casablanca, a doomed love interrupted by war, to which Rick cannot accept. It’s easier for him to lie down for the invading forces than remember a short, heated relationship in Paris. That’s how Rick understands this war, and how his neutrality indeed affects him so greatly. Even if not with him, Ilsa (Ingrid Bergman) must escape the Reich’s clutches. Conflict pauses for no one.

In 1942, Rick’s patrons standing against the German anthem, singing the French anthem in revolt, stood as Casablanca’s powerhouse moment. It’s still a masterpiece, and in the narrative, an opportunity for Rick to see what matters in this world. War goes beyond him. It took love for him to finally notice. 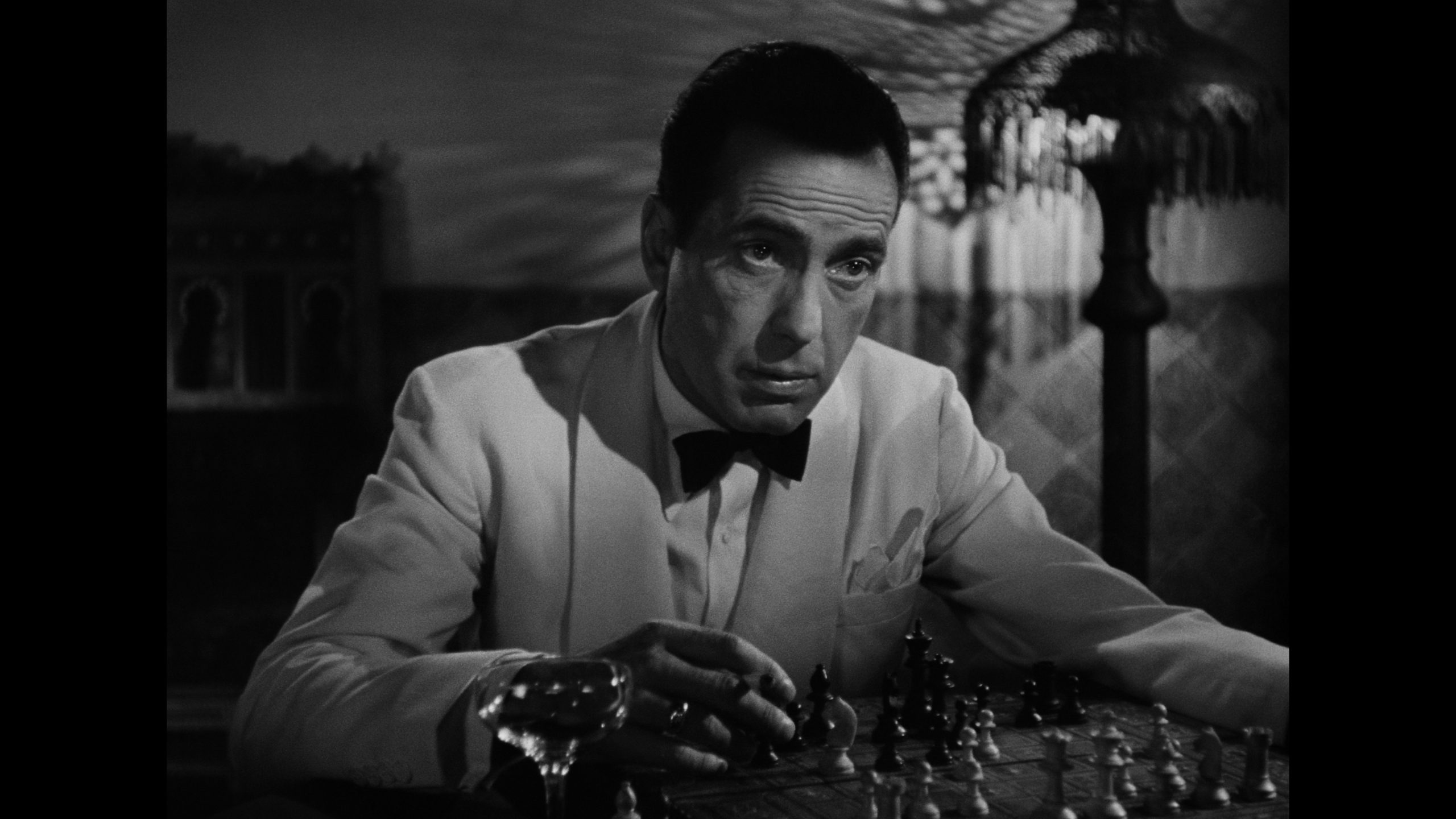 In terms of the 1940s, Casablanca sets the decade’s 4K standard – and others too. Simply marvelous imagery doesn’t show a single nick, scratch, or ding. Grain is not only preserved but resolved without a single instance of compression to find.

Resolution reaches a ludicrous tier, defining Casablanca as never before. Yes, this certainly trumps original theatrical exhibitions because those projectors couldn’t hit this sharpness. Definition jumps from the frame, medium shots as textured as those in close. The bar’s sets reveal nuance in light fixtures, table wood, and more. This is absolutely definitive.

There are no instances of crackling, noise, or static. Casablanca is vintage audio spectacle. Dooley Wilson’s wonderful voice carries without an ounce of an appreciable degradation. It’s smooth and bright, captured with a clear flair for fidelity. From gunshots to plane engines, Warner has treated one of their finest hours right. Even the dialog sounds new, completely defying how early Casablanca entered the sound era.

On the UHD, an introduction from Lauren Bacall joins two commentaries, one from Roger Ebert, the other from Rudy Behlmer.

The Blu-ray follows the previous editions, but is not complete. Night at the Movies a vastly underrated bonus, replicating the classic theatrical experience with trailers, newsreels, and cartoons, becoming a transition into the main feature. Behind the Story plays host to five sections, with a runtime passing two and half hours. Great Performances squares in on Bogart’s role, 90-minutes on its own. A feature on director Michael Curtiz and An Unlikely Classic, the latter detailing the rise to prominence for this film come next.

You Must Remember This, detailing the exhaustive history of Warner, ran five hours, but this disc includes the Casablanca section only.

The iconic example of showmanship and relevance, Casablanca remains a masterpiece for its absolute power over audiences.