Summer Ghost is a poignantly animated tale of supernatural drama about three teenagers drawn towards death. Illustrator loundraw, whose work has been adapted into anime before by others, makes his own directorial debut with the short feature. The gifted artistic talent shows immense promise as a major force in anime direction with this accomplished, if brief, film.

Three teenagers are drawn together by the claims of an urban legend – supposedly lighting fireworks at an abandoned airfield will call the “summer ghost,” a spirit haunting the area who will answer their questions. Tomoya, Aoi, and Ryo are surprised when they find out the legend is true. A ghost named Ayane appears, leading them on a mysterious exploration of death and ultimately life. Summer Ghost is a melancholic story of youths confronting death and how they deal with it.

The unique short feature is capably animated by loundraw’s new Flat Studio, featuring his original designs. Relatively brief for theatrical anime in Japan at forty minutes, there’s enough meat on Summer Ghost’s bones to sink your teeth into while leaving viewers a tad disappointed there isn’t more. If it wasn’t a one-off, you’d think it was the packed debut episode of a hot new anime series.

It’s hard dismissing the comparisons of Summer Ghost to Voices of a Distant Star, the acclaimed animated short film which got future superstar director Makoto Shinkai first noticed in animation. Like Shinkai, loundraw announces his presence as a director with Summer Ghost in a major way. This is the debut of an animator with a bright future ahead. There’s a satisfying accomplishment to the story and characters, not to mention an eye for intriguing visuals and beautiful artwork, which elevates Summer Ghost into very exciting territory.

Standing on its own, Summer Ghost’s limitations prevent it from the masterwork it could have been. Forty minutes is just enough time to introduce the main characters and tell a coherent narrative. There’s little room left for sub-plots or complex backstories. Flashy animation has to compensate for somewhat trite character development, needing a full-length feature for further development. The basics, including likable characters and a catchy central premise, are all there for a true masterpiece. 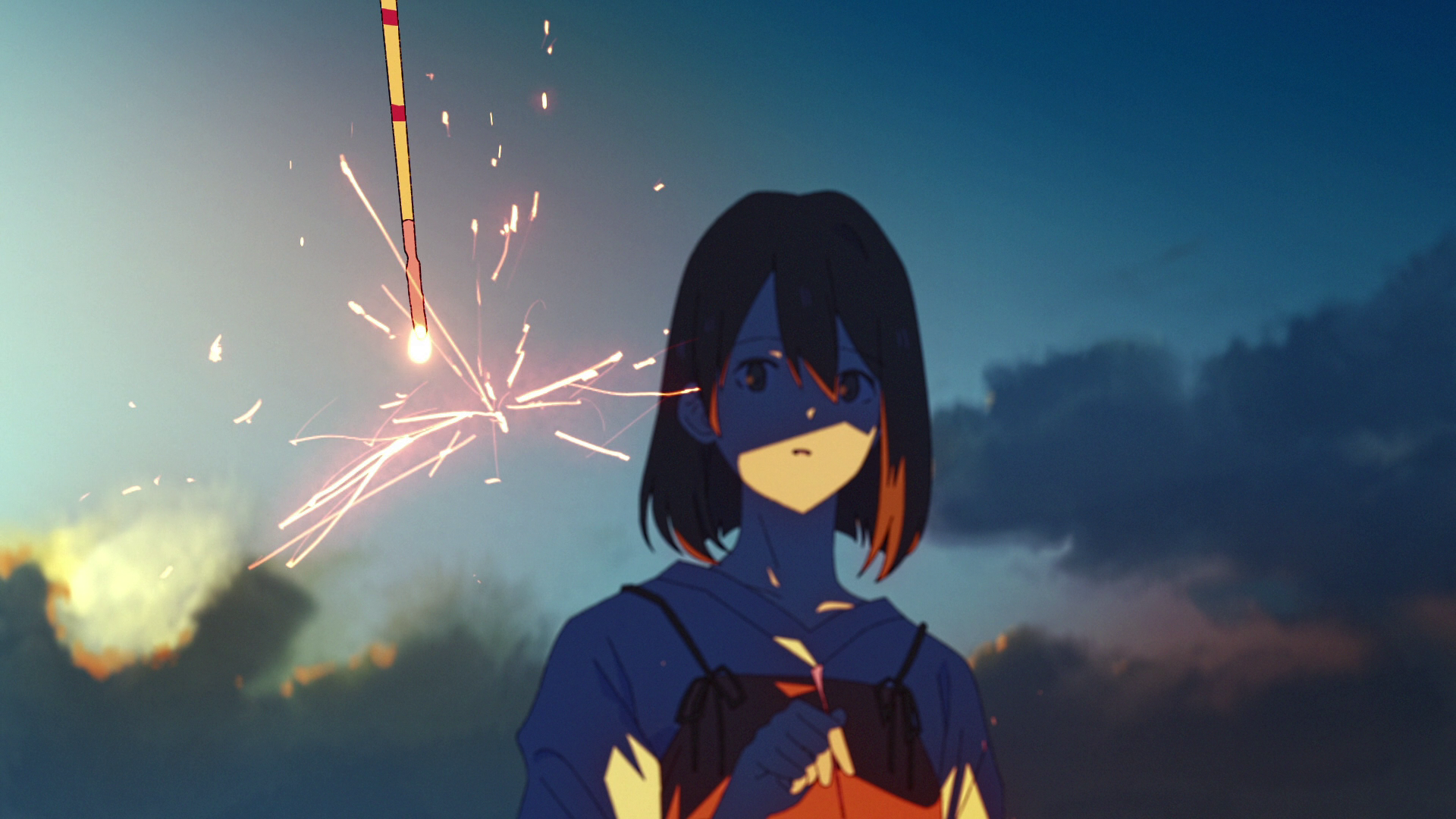 GKIDS has their anime Blu-ray presentations down to a science by this point and loundraw’s lush drawing style breathes life into the 1.78:1 presentation. The main feature runs a tick shy of forty minutes, receiving an AVC encode on a BD-50. Summer Ghost maybe lacks the ultimate polish of the biggest theatrical anime but makes up for it with inspired creativity and interesting artistic choices.

The 1080p video reflects a director making his animated debut, heavy on lens flares and other lighting effects borrowed from such household names as Makoto Shinkai. Fully animated by loundraw’s new Flat Studio, they are still a way’s away from the finished output of bigger players in the industry like Studio Ghibli or Madhouse.

There’s a pastoral quality to Summer Ghost’s animation combined with an ambition that reaches beyond ordinary anime. loundraw’s unique approach to drawing and color shine throughout Summer Ghost. This is vivid picture quality perfect for Blu-ray.

Japanese and English 5.1 DTS-HD MA soundtracks perform comparable jobs, delivering clean vocals and mild surround mixes. The Japanese dub is probably your best bet but the English cast does a fine job with the melancholy material.

There isn’t an abundance of discrete audio beyond a low-key piano score and gentle music slightly swelling across the entire soundstage in select scenes. Dynamics are fairly rewarding and the low end is better than expected.

Making up for the main feature running a brief forty minutes, an extensive documentary focusing on Summer Ghost’s development process offers loads of insight into this unique project.

Early pressings include a glossy slipcover. The disc is marked Region A.

To You Before Dawn Documentary (78:53 in HD; Japanese 2.0 Dolby Digital w/ English subtitles) – Primarily consisting of interviews and production meeting footage shot as the project was developing, this full-blown documentary explores many nuances of the animation process and Japanese dub recording. Director loundraw explains his approach to the art and story while producer Ryu Ishii paints a broader picture of the entire production. Nicely done, it’s one of the best behind-the-scenes anime documentaries I’ve seen.

Interview with loundraw (13:36 in HD) – The director and primary animator discusses his creative choices making Summer Ghost, everything from his conscious use of pale colors to the necessary cutting of ten minutes from the short film. loundraw even digs into the meaning behind his curious name.

Full disclosure: This Blu-ray was provided by the label. This has not affected the review’s editorial process. For information on how we handle all review material, please visit our about us page.

An engaging anime short film from gifted illustrator loundraw produced by his new studio which hints at greatness in the future.