Doing it for Ella

Participants in Rollerball die. Not often, but the risk is there. They play, like any athlete does, aware of that risk, and they do so for the whims of their corporate owners. Rollerball isn’t a movie praising professional sports, rather one criticizing their brutality and spectators calling for violence.

Rollerball has such a unique demeanor among ‘70s futurist action movies, utilizing a cinema verite style that makes this story seem utterly logical, normal, and accepted. There’s no satire so much as commentary on what might be. Aside from the game itself, Rollerball got a lot of this right.

The US Supreme Court gave way to Citizens United, which broadly speaking, was a case that allowed corporations to be considered people in the political sphere. That’s Rollerball’s greatest concern, a world run by mysterious business figures who control not only money, but information on how they came to gain control too. There’s no history other than what’s told.

Rollerball falls under a banner of futuristic dystopia, but lacks the formula’s usual dire exteriors. People have medicine, food, housing – and they never consider the costs. Not the financial, but the social distress and distortion of individuality. That in today’s world is a cultism, where entire personas become defined by brands or celebrities. The corporations love it, much as they do Rollerball.

As a distraction, Rollerball works on a submissive populace. So too does the luxury, with furnished homes sporting countless TVs, elegant (for the ‘70s) furniture, and cozy lifestyle. Yet superstar player Jonathan (James Caan) lost his wife because the company said so. That’s the only noticeable cause for his rebellion, as the social order otherwise looks as if entirely normal and typical. Rollerball never shows the society’s seedier edges. That’s all in the background, the executives in total control. If the in-movie’s public doesn’t know, neither does the audience.

Invigorated by competition scenes, Rollerball overdoses on quiet melancholy, making the stellar stunt work further stand out when skating. Rollerball can slog in places, pouring on misery in this happy future-scape, because in actuality, no one is actually happy. They’re told to act like that. The corporations told them to. 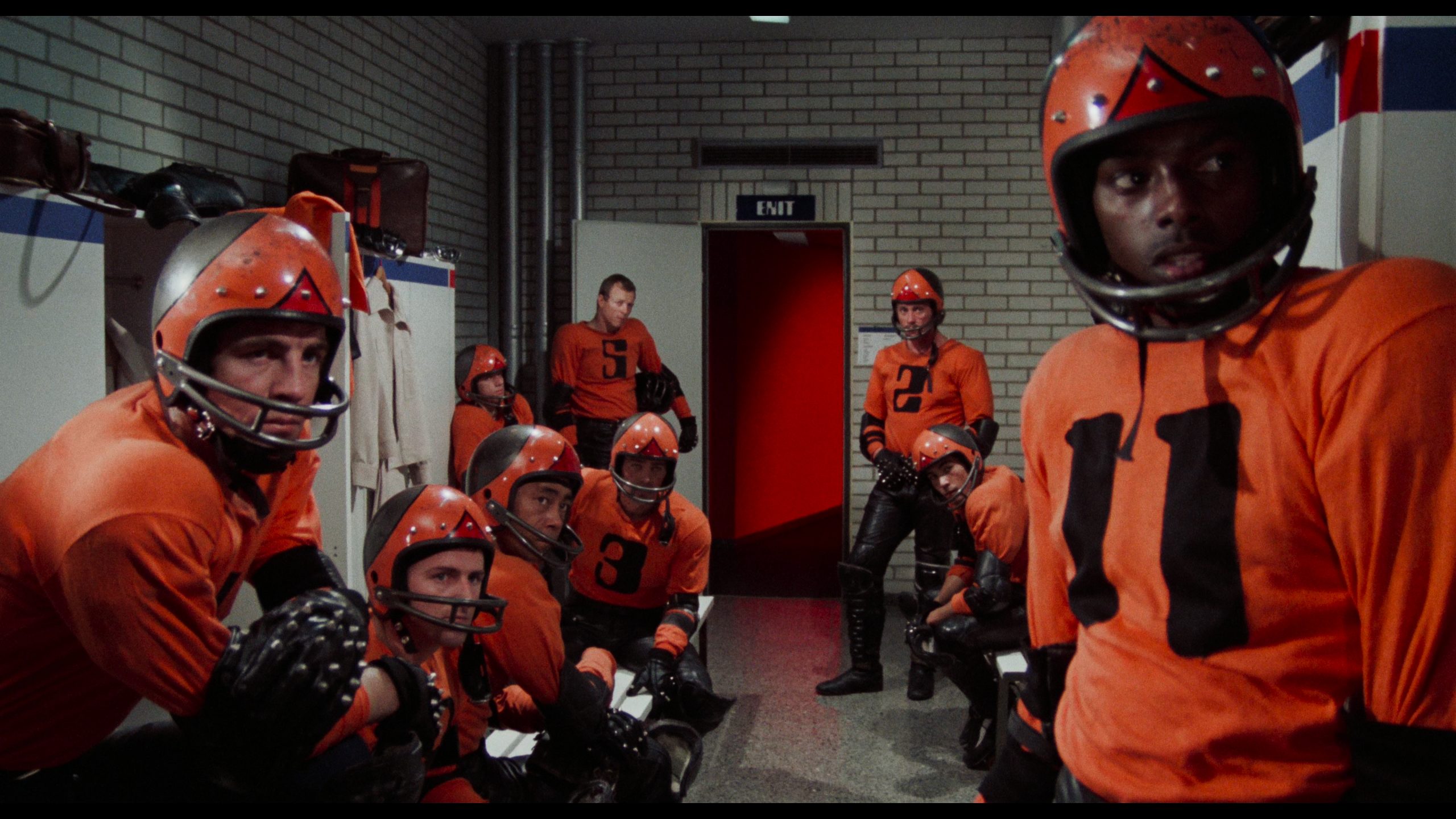 Black is black via this Dolby Vision master. Shadows appear reference grade thanks to this, keeping Rollerball inky and loaded with depth. Dimension stays high throughout, every dark corner accounted for, and the brightness when seeing scoreboard lights or helmets reflecting overhead is splendid.

Team uniforms show outstanding color reproduction, and that saturation continues through everything else, like flesh tones. Nothing in Rollerball looks artificially enhanced or altered, keeping the film stock’s natural qualities.

A fresh 4K master preserves grain, easily resolved. Rollerball isn’t short on definition, lines resolved cleanly and the resolution a showcase. Fidelity holds to its truest levels throughout. Facial texture is everywhere, medium and wide angles just as impressive. Even when the cinematography uses a hazier aesthetic, detail sticks around.

Both options come in DTS-HD, 5.1 and stereo tracks. Rollerball’s sports scenes bring significant stereo action to this soundscape on both tracks. The ball rolls out, sweeping across the soundstage, enveloping the room in the 5.1 mix. The crowd jumps from each speaker.

Clarity belies Rollerball’s age. Dialog sounds new. The score reaches a surprisingly bold crescendo, the only missing element being bass. There’s no range, the only indication this came from 1975.

Two commentaries, the first with director Norman Jewison. The second brings screenwriter William Harrison into the recording booth. An older featurette – from the ’70s – runs eight minutes. There’s a 25-minute making of pulled from previous editions. James Caan sits down for an interview, as does stuntman Craig Baxley. The Munich location shoot is then discussed for 18-minutes.

An angry, cynical, and stark look into a proposed future, Rollerball thrives on the script’s thematic weight.