Every character in Reservoir Dogs acts like a professional criminal. They have the talk, the macho personalities, the indifference toward society, and smug sense they’re impervious to law and/or death. Their masculinity is overwhelming.

When together, they fight and bicker. Sometimes physically, sometimes verbally. There’s no sustained trust between them. One doesn’t even tip waitresses.

Reservoir Dogs is cruel, grotesque, and revolting because it’s so openly honest about awful people

Their entire worldview comes from pop culture, the idea of every man becoming Charles Bronson or Clint Eastwood, tough rebels against society as they aim for the quick score. The western ethos run thick through Reservoir Dogs, director Quentin Tarantino’s debut offering that reveals his passion for spaghetti era grindhouse films. Reservoir Dogs is cruel, grotesque, and revolting because it’s so openly honest about awful people.

They’re racist, they’re sexist, they’re violent. Reservoir Dogs doesn’t have a hero because even the slightest hero succumbs to murky morals. Leader Joe Cabot (Lawrence Tierney) gives a flashback speech before the finale, telling his crew to knock off the jokes. This is business and serious. Petty squabbles don’t matter, only the job. That message doesn’t penetrate.

Paranoia runs deep through this script. Much as this assembled team wear their cockiness when in the presence of the others, internally they bury their reasonable fears. They shelter feelings and uneasiness by spitting racist venom, or boasting about sexual aptitudes. Reservoir Dogs makes sure to turn their actions into a farce, mocking the idiocy and ignorance.

It’s bloody to a darkly comic fault. Tim Roth’s Mr. Orange bleeds more than two people combined yet survives. If it looks cartoonishly exaggerated, that’s Reservoir Dogs purpose – a vision of what failure brings to show how sheepish cruel men truly are. It’s too much blood to be real, dripping into red lakes beneath them, artificially envisioned by their own panic.

Reservoir Dogs exploits the Hollywood ideal of violence, and mocks the locker room talk that defined a generation’s action cinema. Much as Reservoir Dogs pays tribute to small scale foreign imports, it’s also moving the conversation and style forward. Tarantino’s innate ability to turn nonsense dialog into compelling screentime and character definition is a skill no one matches with such conviction. Reservoir Dogs, even at this stage in Tarantino’s resume, is still among his best. 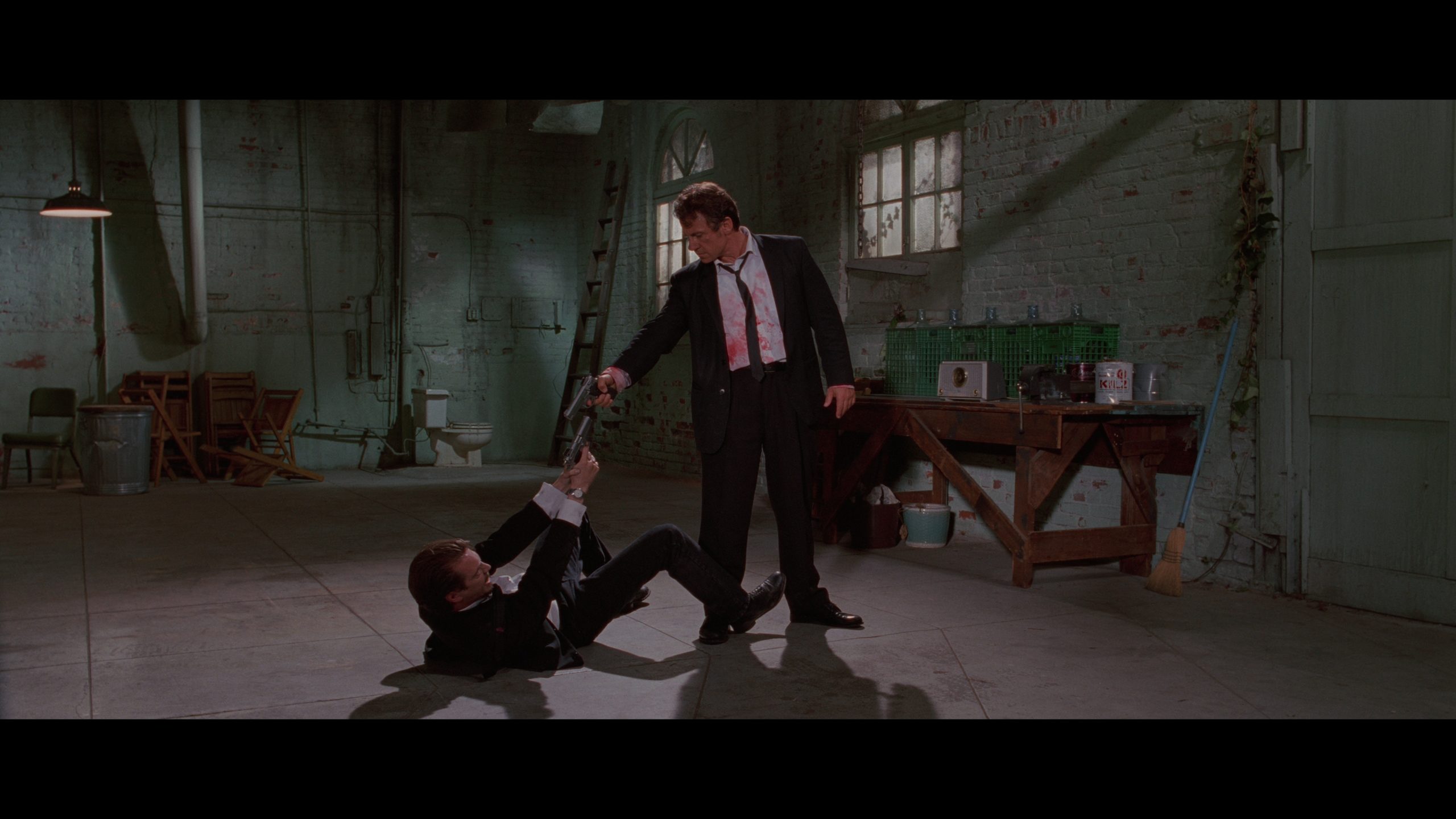 A heavy reddish tint sits over Reservoir Dogs 4K debut. Flesh tones appear over warmed, and blood looks practically neon. The oversaturation creates a gaudy aesthetic, akin to ’70s exploitation, but also aggressively boosted. The encode can handle it most of the time, yet falters in spots. Look at Keitel’s face at 23:40, his cheeks flush and chroma noise seeps in. Denser colors struggle when resolving gradients.

Suspiciously light grain leads to questions about this new master. While way, way ahead of the awful Blu-ray, there remains a smothered, glossy appearance over the imagery. It’s detailed, with texture splendid and definition consistent. However, Reservoir Dogs looks less like film and more like digital, which of course it’s not. Ringing is evident on many edges, albeit slight.

The best thing about the disc’s visuals is the contrast. It’s lively, bright, and intense as needed. Black suits no longer crush as they did before, shadow detail preserved. However, some crush remains, especially in the diner scene just past the hour mark.

TrueHD lacks power. Gunshots don’t produce any bass. Action flashbacks spread across the soundstage with ambience, although bullets stick firmly to the fronts.

Inside the warehouse, dialog echoes well. Louder yelling bounces off the walls, marginally jumping from the center into the rears and stereos.

On the Blu-ray, deleted scenes and two featurettes.

Brilliantly composed, Reservoir Dogs mimics cinema as much as it moves it forward through macho violence.