Doing the Mess Around

Every year, Hallmark Channel and Hollywood dump holiday movies onto screens, each trying to reach Planes, Trains & Automobiles’ heartfelt honesty. They all fail. There’s never been another that perfectly encapsulates the season’s purpose.

Few movies have souls. This is among the few to grow one, from John Candy’s hilarious yet infinitely warm performance to an ending that’s immaculate, honest, and emotional. Plus, it’s the Great American Road Trip movie, one of the best of those too, igniting laughs from a truthful experience that catches every possible hiccup on the road. Delayed flights, botched rental cars, lost luggage, and theft feel authentic, with only the slightest exaggeration for effect.

Wacky as Planes, Trains & Automobiles gets, the truthfulness makes it palatable

That honesty counts in driving this story, which intends to reflect a universal experience. Wacky as Planes, Trains & Automobiles gets, the truthfulness makes it palatable. Timeless too (even if a cell phone might help now). Del Griffith (John Candy) and Neil Page (Steve Martin), permanent mismatches, bond over a shared understanding, despite their infinite irritations with each other. Everyone needs help, even the obnoxious slobs with a good heart, like Griffith.

As a pair, the two make up cinema’s best buddy duo because unlike most buddy flicks, featuring cops or action stars, these two anchor themselves in a relatable scenario. Not only the travel-based chaos, but the humanity of it all. Life’s little annoyances keep building until we lose focus on things that matter, which for Page, he only realizes in the final minutes of screen time. The awkwardness on screen is serene, those sudden moments where Page realizes his own faults far supersede Griffith’s as a person.

Rated R for only a singular outburst, that’s the only thing keeping Planes, Trains & Automobiles from occupying a place among family classics. That rage is worth it for comedy and to fully establish Page’s personality, but it’s otherwise a flawless look at American holiday anarchy in the best way. 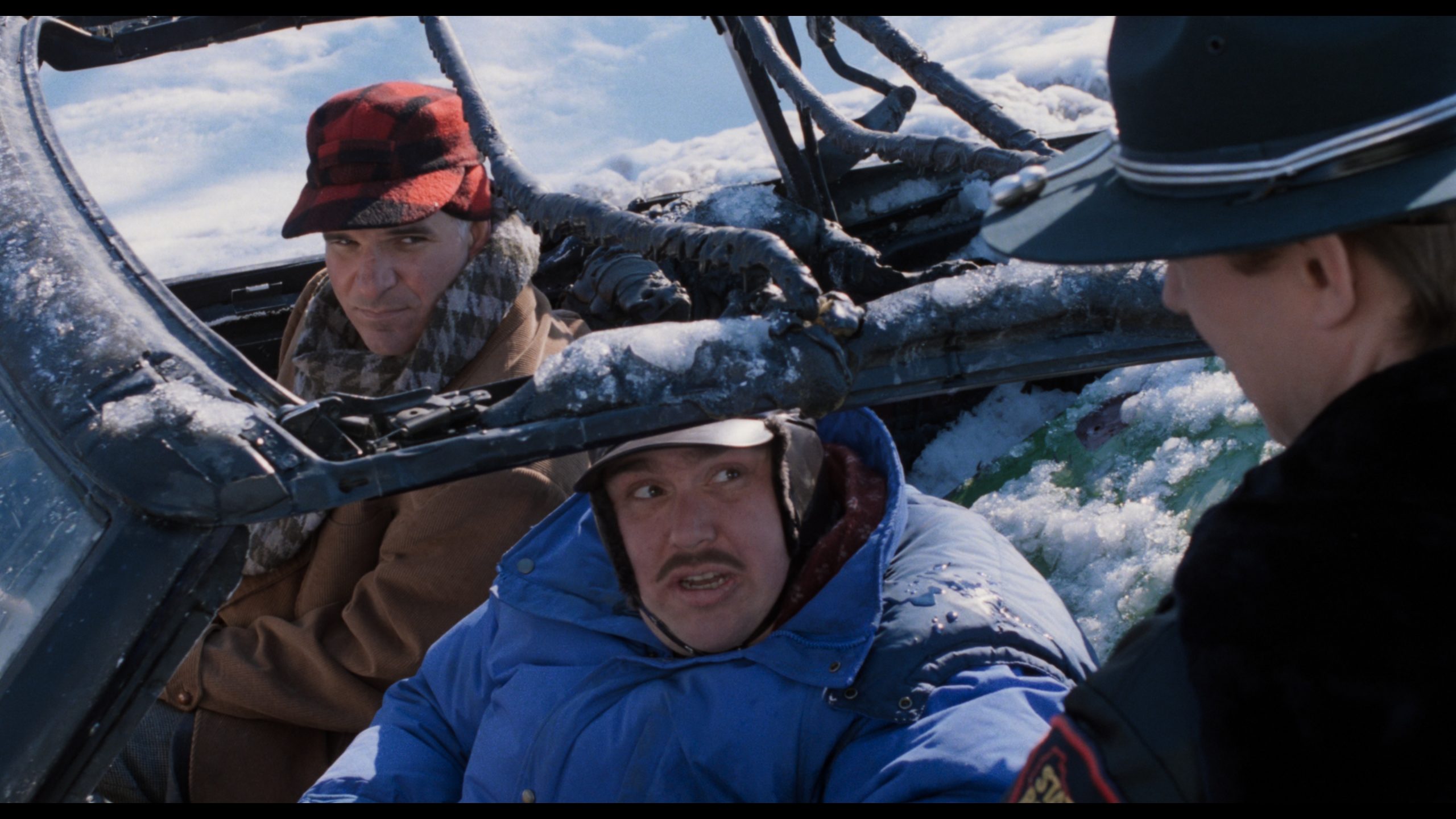 Paramount’s master is an odd one. It’s bad, but not the worst case scenario. Strangely, it’s a mixture between well rendered and horrendously DNR’d to death. There’s clear grain left in the imagery, and at times, this looks wholly natural. And then in close, the suspicions grow, muddying the fidelity as unnatural smoothness begins to erode definition. Grain forms weird pockets of digital data, buzzing on faces, then smearing and smothering backgrounds into blurry blobs.

Overall, Planes, Train & Automobiles fails to capture the film stock’s natural clarity. Low fidelity and dull crispness make for limited improvements over the HD release. Dolby Vision doesn’t bring any genuine spark, whether referring to the color or contrast. It’s as if Paramount forgot to master that part entirely, with little to no gains made (other than the taxi, with string lights that glow wonderfully). Pale flesh tones appear dated and flat. Primaries sag.

Planes, Trains & Automobiles opens on a studio logo that capture vehicles panning to the sides, through the surrounds, or a combination or directions. The effect is cute, and doesn’t reveal any artificial elements. Despite a lack of modern fidelity, it comes out naturally.

Vehicles are a constant presence, always doing something outside of the center. Music will pop at its peak with minimal push into the surrounds, enough that you’d notice were it gone, but not enough that you’ll take heed while it’s happening.

Crowded airports do nothing interesting, with respect to a likely mono or stereo source. That’s fine were the mix not trying hard to break free of the center elsewhere. In fact, it comes across as flat. There’s nothing inherently wrong, and flaws on the track itself are non-existent. Planes, Trains & Automobiles only grabs for opportunity at random.

On the UHD itself, Paramount carries over legacy features, beginning with a 16-minute press junket from the original release. A two-part John Hughes feature runs close to an hour, celebrating the director. That’s followed by another brief four-minute piece on Hughes and his more adult features, the clips pulled from the junket above. Then, a John Candy tribute hits three-minutes.

On an additional Blu-ray (with bonuses only, no movie), this release finds value. A short audition with Dylan Baker is fine, but it’s the 75-minutes of newly discovered extended scenes that bring so much joy. While unedited and raw, the humor is still there, and tiny continuity gaps are filled.

One of the funniest and most honest holiday movies ever made, Planes, Trains & Automobiles ranks among cinema’s comic elite without an ounce of age.