Campy, goofy, wild, eccentric, and surreal as Bullet Train loves to be, it’s also philosophically bound to a Japanese belief system. More than a setting, Japan guides Bullet Train through conversations about revenge, fate, and karma as rival assassins duel with one another over a briefcase.

Bullet Train, true to its name, doesn’t slow down or stop

Via flashbacks, the story is laid out over decades. What seems like time wasting character development factors intricately into this single extended evening on board a train. Again, it all matters because these events need to steer these characters onto this commuter train/ Fate is pre-determined in Bullet Train’s belief system, and unchangeable.

What sounds stuffy isn’t. Brad Pitt leads a cast who absolutely understand director David Leitch’s desited tone. Akin to a live action anime, the result takes nothing seriously beyond the core philosophy, the script infinitely witty, and in its own grotesquely blood shedding way, Bullet Train oozes dark-humored charm. Even among the villains (or the supposed villains, anyway), rooting against anyone seems impossible because their divergent, kooky personalities all offer something that entertains.

Embracing the popcorn pizzazz, sudden and short actor cameos relish the chance to surprise. Bullet Train, true to its name, doesn’t slow down or stop until the final seconds require it to. Even then, Leitch’s action touch keeps the kills coming, all of them prefaced in some manner. There’s no high-class snobbishness to any of it; Bullet Train exploits ridiculous murders until it can’t, as if resenting the credits need to roll in the first place. It’s all joyfully adult, playfully inane, and chaotic. Fate loves that stuff sometimes. 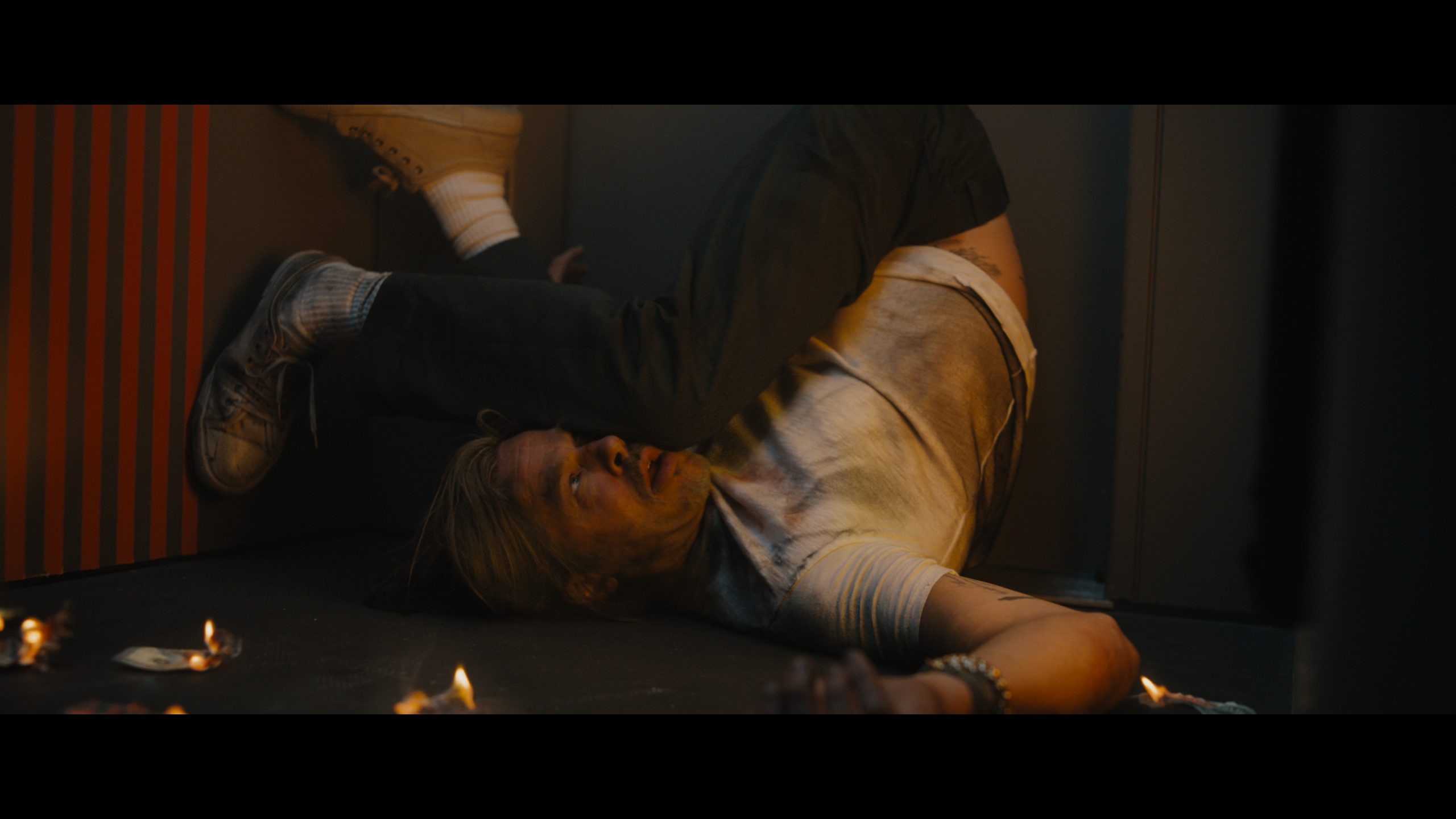 Tokyo’s neon lights make an immediate impression. Brad Pitt walks down the streets, signage sizzling on the screen. In those terms, Bullet Train looks spectacular, hyper bright like a cartoon, and that doesn’t go away once on the stylistic train. Colorful overheads keep the brightness rich.

Continuing the cartoon-like method, color erupts, exaggerating flesh tones, primaries, and anything else requiring a splashy hue. In Bullet Train’s case, that’s basically everything. Warmth is favored overall  (until night brings coolness), but that doesn’t change the intensity. Vibrancy doesn’t hold back. It’s spectacular to see and appropriate to the tone. Dolby Vision was made for grading like this.

Atmos adds fun to this chaotic action flick, keeping steady ambiance onboard the train even during dialog scenes. When action kicks up, so does the soundstage. Motion keeps up with kicks, punches, and gunfire, placing them accurately whether in the rears or stereos. Heights? They play too.

The LFE push isn’t the greatest, but does rumble. Explosions and music stings send a satisfying burst into the low-end. Soundtrack selections have a similarly great time working the maximum range.

On the UHD, Sony keeps the commentary track, featuring director David Leitch, producer Kelly McCormick, and writer Zak Olkewicz. Other bonuses reside on the Blu-ray. Those begin with a six-minute EPK making-of, and a five-minute peek at the stunts. A pure gold blooper reel makes it to three-minutes.The cast earns a seven-minute look at their work, action pre-vis runs four-minutes, an NBA Finals promo hits four-minutes, and then finally, a segment pointing out easter eggs also reaches four-minutes.

Bullet Train’s eccentric, wild, and hilarious style helps it stand out in the action genre.