Code of the Gladiators

The Running Man correctly predicted much of the future. Voice activated appliances fill homes. Deep fake videos provide convincing alternatives to reality. Plus, the slow descent toward mass violence as entertainment. The Running Man’s only mistake was trusting people to believe the truth when shown to them.

There’s a small sub-genre concerning brutal futuristic game shows. Rollerball was king before Running Man, and videogames found their genre champion in Smash TV. That lust to see people win something, mentally placing yourself on that stage and pretending to be one of them, is almost instinctual in its allure. Add in actual murder to a depraved society, and yes, The Running Man could be the world’s highest rated TV show.

The script adds hilarious one-liners after kills, acknowledging the action film’s need to make light of brutality. However, Running Man is sharply written too. Richard Dawson’s honest boast that, “Truth hasn’t been very popular lately,” calls out a controlled media ecosystem, run by the government in this future hellscape. Now that statement carries infinitely more meaning in this social media-driven existence.

A wonderful irony came with time. Schwarzenegger turns around to shout, “I’m not into politics,” which of course he was decades later. Running Man tells a story about someone who thinks political power doesn’t affect them, but it does. That indifference nearly gets him killed. And, the entire world consumes itself because no one pays attention; they’re not into politics either, rather they just watching distractions like this show.

In making this point, Running Man doesn’t try to hide the absurdity. The result is a culturally relevant campy icon, whose villains dress in Christmas lights, and a crowd eagerly awaits a slaughter. The show itself doesn’t make much sense – what happens if the runner is killed in the first stage during a three hour broadcast? No one cares though, certainly not viewers who treat death with such casualness, they happily celebrate their wins at the gambling tables, dead people be damned. It’s hilariously craven behavior, forever captured on film. 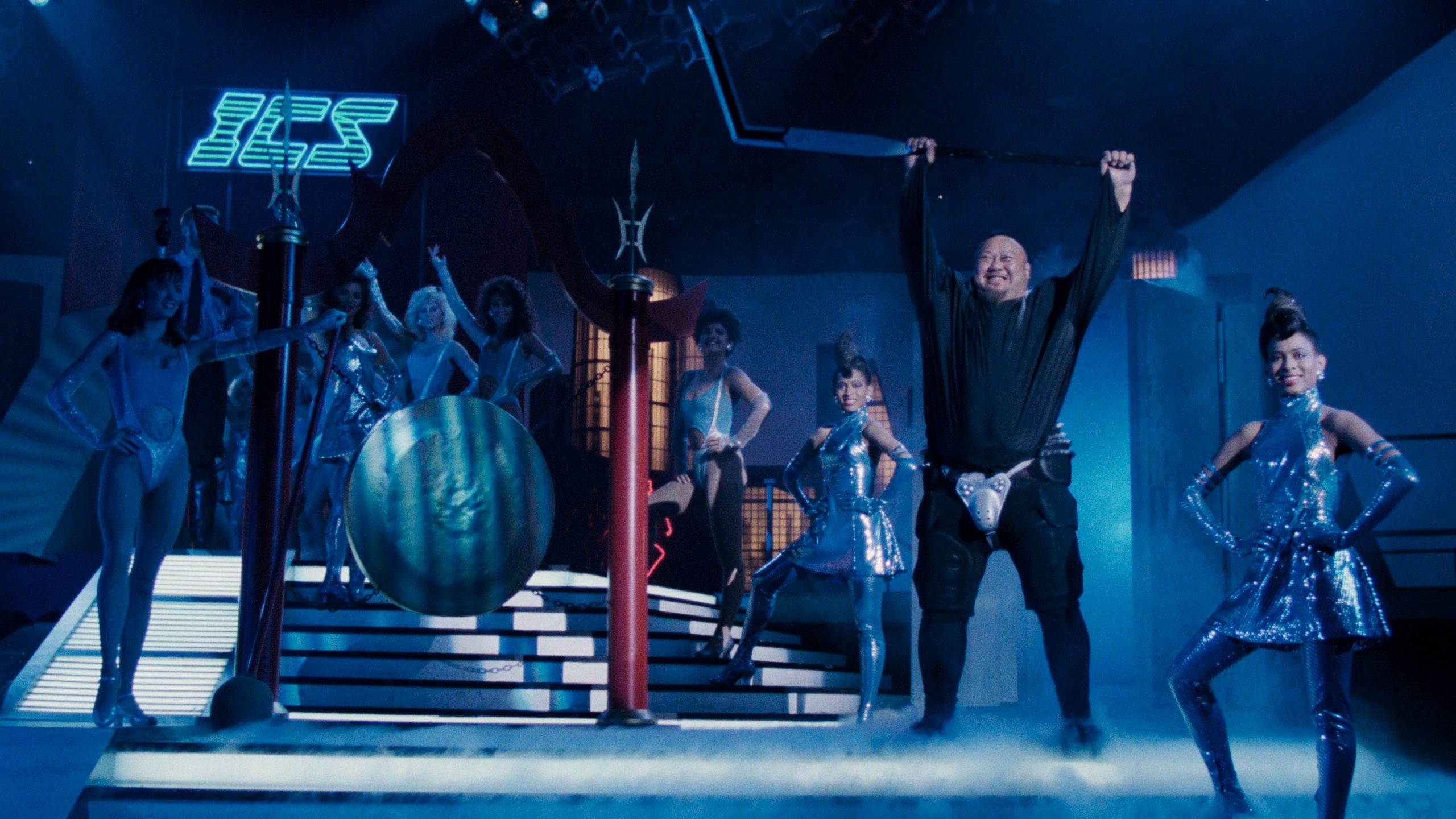 Beautiful, high-resolution imagery doesn’t spare details. Texture looks outstanding, from facial definition to the decrepit areas of the city. Sharpness is brilliant, maintained by superb grain replication. Smoke and dust pose no threat to the definition.

Dolby Vision brings some added splendor, raising the color to give primaries renewed life. Once into The Running Man itself, wild uniforms/costumes sport spectacular vibrancy. Every color jumps from the frame. Flesh tones hold a naturally vivid hue.

An active, wide soundstage gives a modern spark to this ’80s era audio. Sound effects flood the rears, ambient effects natural whether a helicopter, a steel mill, or the game show crowd. Channel separation comes across as entirely natural, and the score jumps through every speaker. The sled sequence(s) is especially awesome.

Dated gunshots aside, there’s some range to appreciate too. Music hums in the low-end to bring some depth into the ’80s epic. Otherwise, bass remains limited by the source materials.

Nothing. Paramount only includes the barren 4K disc inside the package.