Satan’s Little Helper is an underrated horror gem from the early 2000s starring a young Katheryn Winnick (Vikings) before she became a television star. Writer and director Jeff Lieberman crafts a clever script which subverts the slasher genre with a wicked sense of humor. A young boy influenced by a popular videogame mistakes a serial killer in costume for Satan, wreaking havoc together all over town as people are out enjoying Halloween. There are few original ideas in horror but Satan’s Little Helper is smart filmmaking in the wake of Scream and its countless copycats.

Nine-year-old Dougie (Alexander Brickel) is obsessed with a popular videogame called Satan’s Little Helper. When his beloved sister Jenna (Katheryn Winnick) returns home from college with new boyfriend in tow, Dougie is annoyed he’s no longer the center of her world. She promised to take him out for Halloween but has other priorities.

Left on his own in a sleepy suburb preparing for Halloween, Dougie crosses paths with a hulking serial killer on the loose dressed up in a devilish costume with an impressively scary mask. The young boy confuses things and begins helping Satan Man’s reign of terror. Having a hard time distinguishing reality from his favorite videogame, Dougie befriends the killer.

Satan’s Little Helper is a witty slasher willing to earn its R-rating the old-fashioned way. There are heapings of stark violence and bloody mayhem around town courtesy of Satan Man, even as a gleeful nine-year-old goes along for the evil adventure. There’s something to be said for Dougie confusing the dark fantasy of his videogame with reality. It’s handled more for laughs than anything else, a plot device to get the story moving.

Amanda Plummer plays the mom, unaware of the danger her children are in from this madman. Katheryn Winnick exudes a screen confidence and presence which helps the movie hang together. Young child actor Alexander Brickel tackles Dougie surprisingly well, playing a kid lost in his own fantasy desperate for attention. There’s something quite wholesome about the family, even as it becomes clear everyone is in danger.

The plot does become a bit ridiculous and contrived as characters have to make stupid choices for everything to fall into place correctly. By then however Satan’s Little Helper’s charming subversion has grabbed you and it’s not so much a concern. Cheeky laughs and the film’s twisted sense of comedy pepper over any lingering problems. There’s a hilarious scene of Dougie and Satan Man mowing down pedestrians with a shopping cart, pure comedic genius. 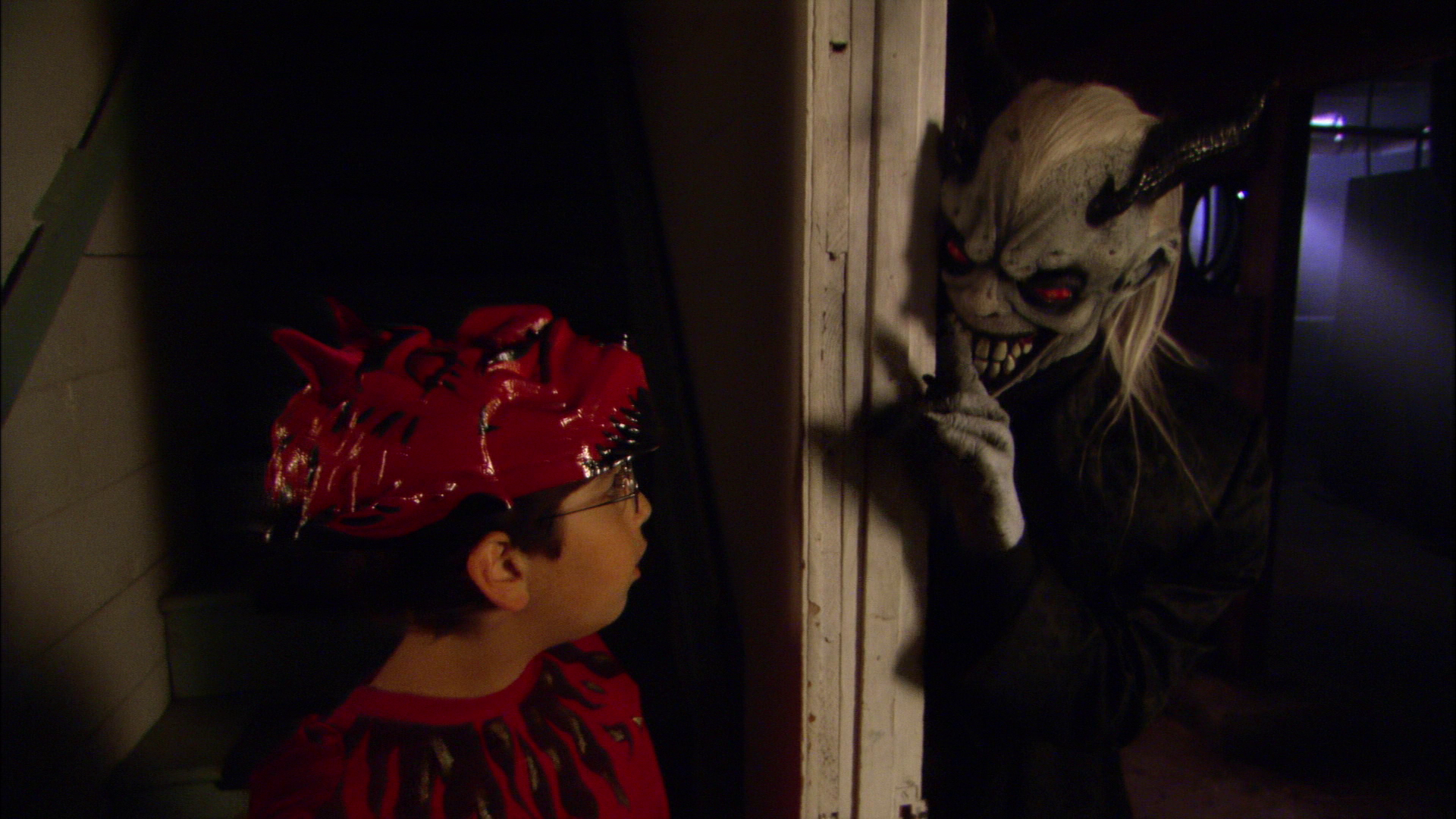 Satan’s Little Helper was unfortunately filmed using early digital cameras, Sony’s primitive HDCAM technology. The 2004 movie is occasionally soft and lacking detail. Lieberman himself wishes he had shot the movie on film looking back. The mostly clean capture has its moments but offers underwhelming picture quality. Being digital, there’s no apparent wear and related aging.

Synapse Films does what it can for the 1.78:1 presentation but some inconsistency is unavoidable. The main feature runs its original R-rated version at 100 minutes on a BD-50. Generous AVC parameters transparently capture the raw 1080p video without a hitch.

The contrast is even with generous clarity. Exteriors have relatively satisfying definition and enough detail for early digital cinematography. Darker scenes are more problematic, revealing limitations in the lighting and shadow delineation. That being said, the costumes and make-up look incredible in tighter shots, far better than DVD with a pure transfer almost identical to the movie’s master.

Funnily enough, the most recognizable song here is “Man of Peace” by Bob Dylan. A witty song selection when it plays as a bit of irony, you don’t expect to hear Dylan playing in a cheap indie horror film.

It should be mentioned Satan’s Little Helper received a 5.1 remix in English on its French DVD. That audio is not included.

Hard to believe it’s taken this long for Satan’s Little Helper to hit Blu-ray and now we get it in good A/V quality loaded with a couple of new special features courtesy of Synapse Films.

Ordering directly from Synapse Films gets you a limited edition slipcover. Regular retail editions arrive in a black case. Packaging indicates the disc is Region A only. The audio commentary and vintage featurette are ported from the 2005 DVD.

Audio Commentary from Director Jeff Lieberman – An engaging and lucid commentary which delves into the film’s production and cast. Lieberman discusses what he thinks work and a few things he regrets.

Vintage Behind-the-Scenes Featurette (04:58 in SD) – Lieberman goes over the filming of a couple important scenes, including the hilarious shopping cart mauling which sees Dougie running over pedestrians at the grocery store’s parking lot.

The Devil and the Details: Making SATAN’S LITTLE HELPER (32:38 in HD) – Jeff Lieberman and his cinematographer among other crew discuss the intricacies and challenges of making the film. Lieberman covers his career in Hollywood and how his work as a writer on certain productions paved the way for this effort.

Jeff Lieberman’s cult gem is an off-kilter horror film with deliciously wicked taste and features a young Katheryn Winnick performance who is a real delight.