Premiering in 1964, Rudolph the Red-Nosed Reindeer never disappeared. It’s a lasting tradition that carries with it a purpose, to bridge gaps between people of different generations, color, or gender. Rudolph’s gleaming red nose, developed for the youngest among us, represents any era’s branded “misfits.”

It’s so good and pure, Rudolph the Red-Nosed Reindeer can’t be faulted

It’s a charming tale on its surface, with a reindeer substituting for a bullied child who begins to believe they don’t belong. That set-up is natural for a TV special, and told with stop motion puppets, it’s magic on screen. Jittery animation brings charm rather than detriment, adding surrealism to an already fantastic fable. Every character design looks harmless, inviting, and memorable, wholly Christmas in their softened appearances.

As with any great children’s programming, there’s more than a journey across the North Pole, including a segregated island where unwanted toys spend their days. Rejected by society, they went off and made their own home in isolation. With only a few years before the Civil Rights movement, it’s an intelligent distillation of greater social issues, and without ever calling specific attention to one moment in time. That’s where Rudolph the Red-Nosed Reindeer earns its value: never forced, the theme extends beyond bullying to resonate with any decade’s ills.

And for kids, it’s simple. Rudolph the Red-Nosed Reindeer easily shows the effect teasing and taunting has on Rudolph, an emotional hook readily transplanted into any school yard. In the end, Rudolph’s story makes physical differences into something to celebrate, not admonish. It’s so good and pure, Rudolph the Red-Nosed Reindeer can’t be faulted, which for something pushing 60-years-old, is impressively. Or, even abnormal. A misfit, you might say. 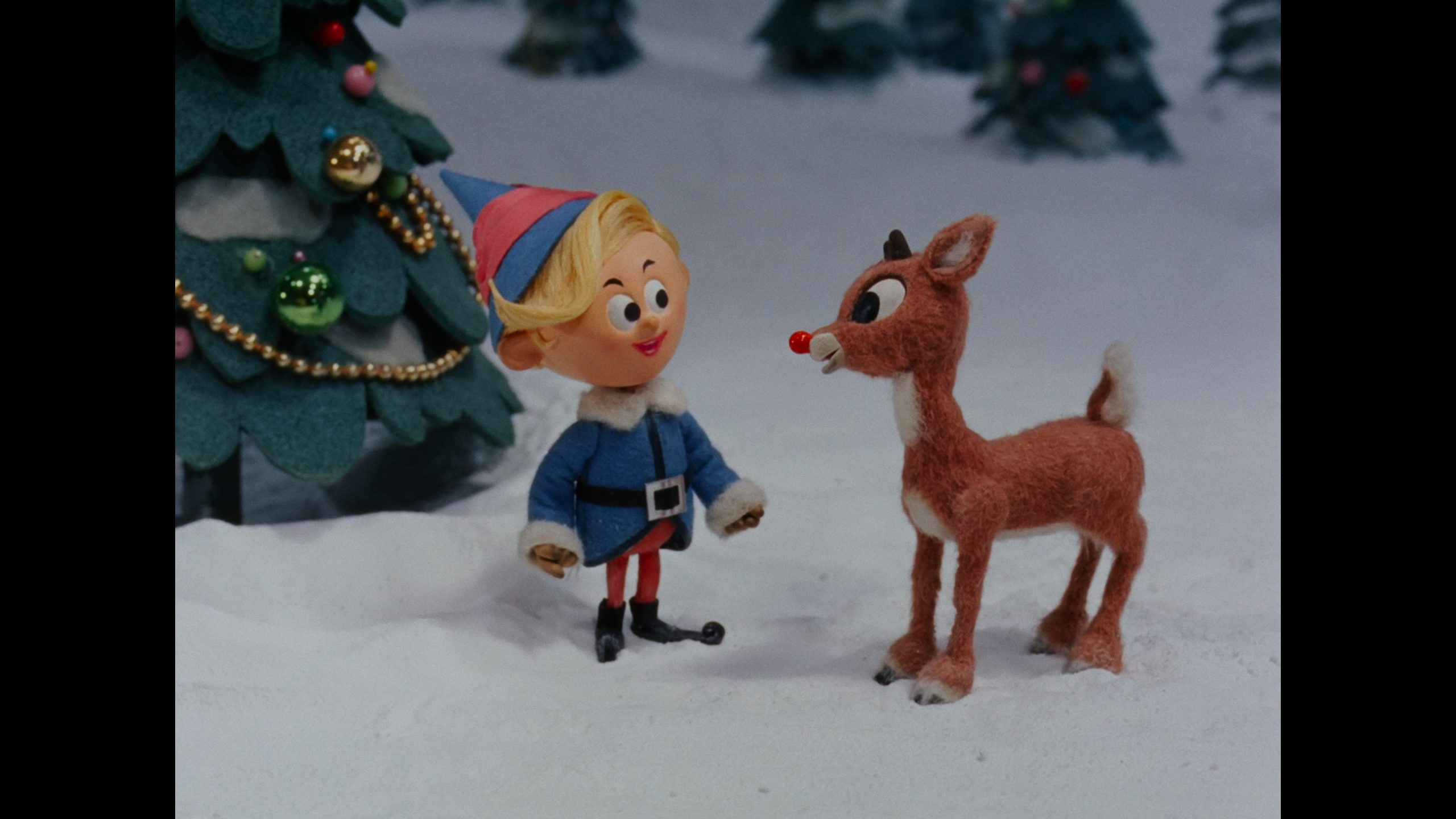 Well this is dazzling. Every little strand of fur on the reindeer, hairs on Santa’s beard, and clump of fake snow appear on screen. Not a detail is missed. Any fault in the animation appears for better or worse. Dirty spots in Santa’s beard or paint smudges on other puppets can’t hide from this much resolution. A slight grain veneer poses no challenge to the encode, and the disc preserves the film stock transparently.

The original mono mix is offered in compressed DTS, with the main track being a DTS-HD 5.1 remix. Thankfully, this remains centered. Dialog stays in the middle. Only the music stretches the stereos a bit.

Overall fidelity doesn’t impress much. Recording quality lacks purity, and in this era of home theater audio, the limitations stick out.

Up first is a lengthy look at Rankin/Bass’ library, running 47-minutes. A brief look at the original puppets and their restoration lasts four minutes. Next is an 11-minute look at creating a Rudolph the Red Nosed Reindeer 4D version, with the completed film to follow. Finally, there’s an animated storybook for the kids.

A pure, timeless holiday special, Rudolph the Red Nosed Reindeer celebrates the holidays as much as empowering individuality.