Hollywood, to some, is a sinister haven for liberal agendas, where stars speak out for their causes and the films themselves represent the left’s desires. Tropic Thunder says otherwise. Fervently. Heatedly. Grossly.

Tropic Thunder’s ruthless debauchery celebrates asinine celebrity culture that raises up on-screen superstars as the people behind them purchase ever larger jets. At a character level, Tropic Thunder is a one-joke movie, tearing down the veil that when screen idols do something stupid, they do so from innocence. To Tropic Thunder, they’re all just stupid.

Tugg Speedman (Ben Stiller) didn’t see the offense in becoming Simple Jack’s star, a story about a handicapped boy and a brutal stutter. There’s Kirk Lazarus (Robert Downey Jr), so into his role, he paid for “pigment reassignment surgery,” oblivious to the new age black face. Plus, Lazarus starred in a gay romance story, then turns rabidly homophobic when he discovers a co-star is gay. The director is clueless, the studio execs are repulsive, and Tugg’s agent (Matthew McConaughey) only cares his client has a DVR – in a South American jungle.

The overarching theme then skewers the Hollywood elite stereotype, because these men (and it’s all men in any form of control) do only what they’re told. If there’s a cause, they stand up for it in public. Behind-the-scenes, they ignore the charade, showing what (and who) they are. With the guns, explosions, and regressive comedy, Tropic Thunder suits an audience seeking low punching laughs along with a sense that freedom is being able to mock the disabled.

Obvious (and clearly intentional) offense taken, Tropic Thunder is still masterfully done idiot comedy, blitzing egos and letting the cast mutilate their own personas. This might become a last-of-its-kind feature, not only for spitting on the entire filmmaking industry, but imagine Robert Downey Jr. cast as Iron Man in 2022 after starring in Tropic Thunder. That’s unlikely.

Tropic Thunder isn’t supporting black faced actors or even remotely treating it as acceptable, rather highlighting the absurdity that no one thought to tell Lazarus it would end a career. Alpa Chino (Brandon T. Jackson) spends enough time mocking the black face to note as much, and carefully exposes the nonsense of doing so in the first place. Here’s a black man in Hollywood so desperate for a film role, he’s starring next an Oscar winner who dyed his skin. That’s among the most truthfully wicked jokes in the movie, and it goes completely unstated; the inequality is obvious. Tropic Thunder stands for something after all. 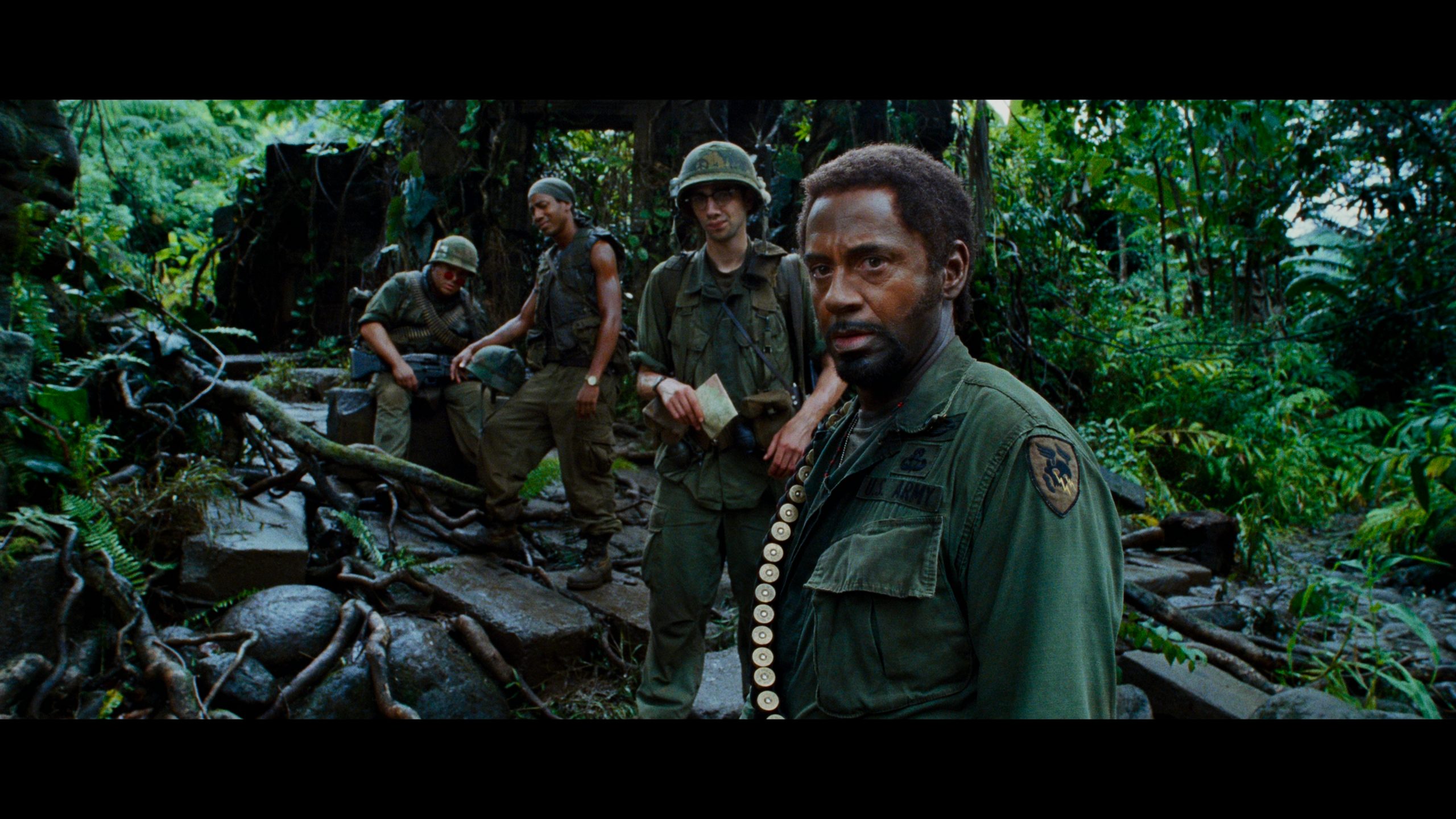 Dolby Vision makes Tropic Thunder’s color palette simmers down on UHD compared to the Blu-ray. The notable digitally-graded warmth doesn’t exaggerate as much, but Tropic Thunder still steers toward an amber hue. Other primaries find their moments, the jungle greenery sensational in spots.

That warmth factors into the contrast, avoidant of pure white, taking more of an orange-ish tint. Peak brightness limits itself by design, yet this is still a hearty, bold image. Black levels keep a steady density, only crushing in moments where intended. When Coogan meets Nolte in the tent at night, shadows crush fully, leaving only necessary pieces visible. This happens as nightfalls in the jungle too. Other times, it’s borderline aggressive on the shadows, questionable, if not a significant fault. When Jack Black first admits his drug use, color reproduction dies for a moment, and crushing blacks don’t help.

Reasonable grain reproduction keeps noise at bay. Tropic Thunder looks like film, and while the resolution gain is nominal over the Blu-ray, there is added fidelity. Facial texture shines in close, and wide angles showing the jungle reveal spectacular definition. Tree lines and tall grass utilize the additional resolution.

Surrounds handle so much activity, there is disappointment Atmos/DTS:X wasn’t an option. Gunfire spreads wide through the soundstage. Screaming and shouting fills every channel. The design keeps activity high no matter the sequence, dialog stretching wide if needed based on camera moves. Rain rolls trough the fronts and stereos flawlessly.

Tropic Thunder is loaded with featurettes (on the Blu-ray only), though things begin with two different commentaries. Ben Stiller leads the first along with his filmmaking team, and then again joins the main cast for their take on the movie. Four featurettes focus on pyro, the opening action scene, a basic script feature, and the sets. Each of the cast members is given their own piece, split into seven sections and running for 22 minutes total.

A Tom Cruise make-up test is included, along with 11 minutes of raw footage from the set, showcasing some adlib. Deleted scenes include a far less funny alternate ending. The MTV VMA skit is one of the funniest parts of the disc, especially Downey letting himself be mocked about personal issues. Reign of Madness is the showcase. Running about a half hour, this is a mockumentary about the events in the film. Everyone is in character, and it serves as an extension to the movie.

A merciless takedown of Hollywood norms, Tropic Thunder is hilariously satirical in shattering the wall that blocks viewers from the real world.