Never More than a Disciple

36th Chamber of Shaolin dealt with untrained, angry rebellion. The sequel warned not to take shortcuts. Disciples of the 36th Chamber then looks into egotism, and what if that new student in the Shaolin Temple can hold his own?

It’s a smooth flow through this film trilogy, each telling the same story with different morals. In Disciples of the 36th Chamber, comedy is key. New student Fang Shiyu (Hou Hsiao) struggles in his regular studies – a truly dismal writer held back so long as to repeat the 5th grade into his early 20s. Thankfully, Fang can fight.

Disciples of the 36th Chamber enjoys its time, using 90-minutes to tell an utterly routine story

Rebellions can spark anywhere, and for Fang, it’s the Manchu government’s oppressive control. This no name kid and failing student becomes a leader, joining his brothers on a wild plan to defeat their invaders. Disciples of the 36th Chamber doesn’t land the lesson though.

Fang sees his talents fail inside the temple’s halls. Wherever he succeeds, he’ll also fall. But he’s more successful than anything, and the final act deals in a near-betrayal, luckily saved by returning monk San Te (Gordon Liu) to fight alongside his previously belligerent pupil. It’s a murky twist, lost in the now familiar scuffle as rivals enact their wildly fun fight choreography.

Disciples of the 36th Chamber enjoys its time, using 90-minutes to tell an utterly routine story, behind an energetic (if obnoxious) star who never learns to settle down. With an epilogue, Fang is seen still playing jokes, goofing off like an emotionally deficient child. He conquered the Manchurians, but didn’t appear to learn anything in the process. He’s still rambunctious, disruptive, and undisciplined, going against the usual Shaw Brothers narrative style, and not with positive results. 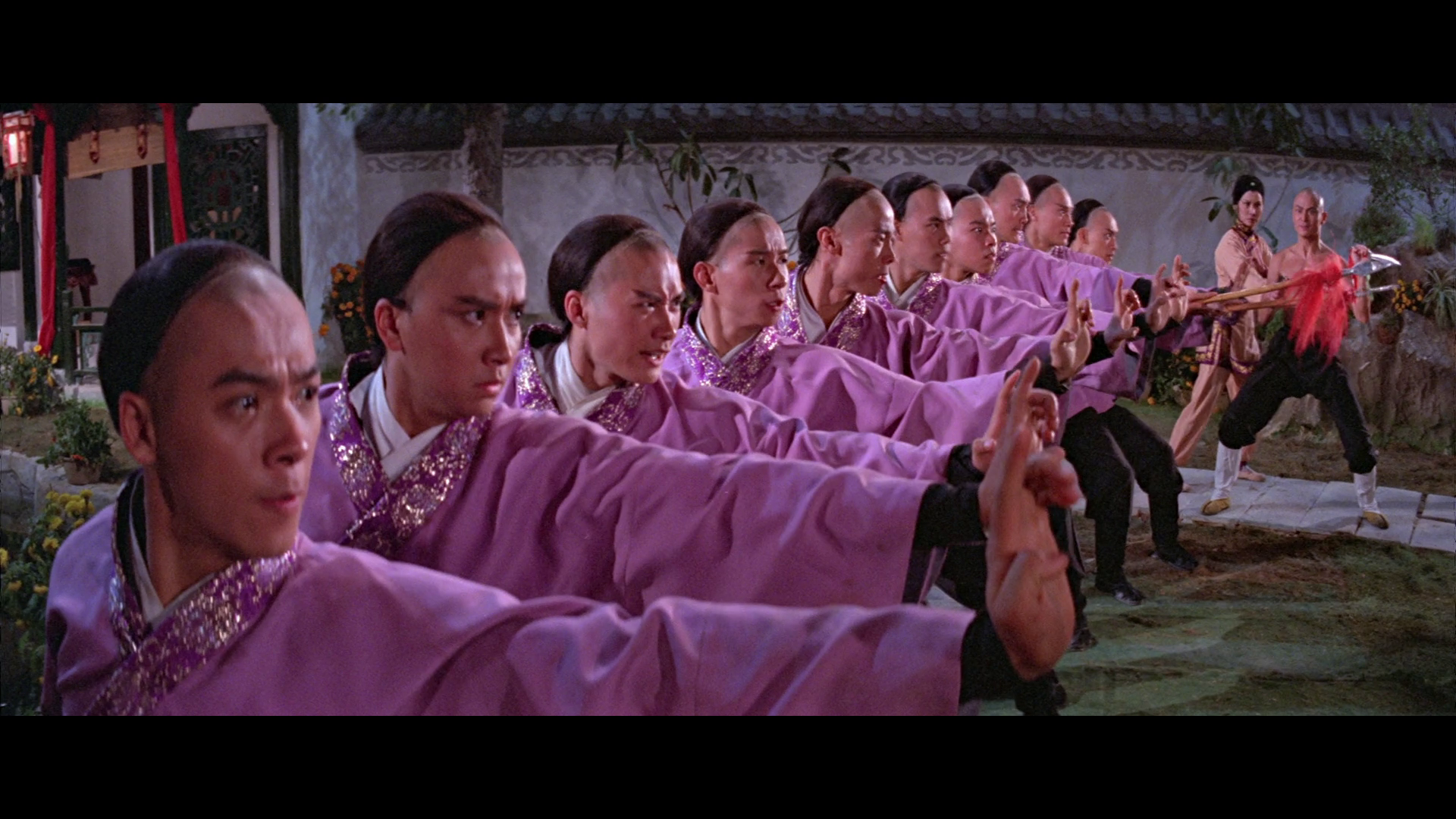 Incredible color saturation makes Disciples of the 36th Chamber sing on Blu-ray. An opening celebration with flags and banners shows off all manner of red and blue, plus uniforms in a dense navy. It’s all splendid, and with flesh tones on point.

Sharing a disc with Return to the 36th Chamber, the encode shows minor compression problems overall. The master looks decent. Only tiny specks and scratches appear on the print. Resolution looks excellent overall, but the slightly noisy grain robs fidelity, especially in medium/long shots. In close, facial definition and texture find their moments to break from the original film stock unscathed.

Satisfactory dialog reproduction in either Mandarin, Cantonese, or the English dub comes through via DTS-HD. Fair fidelity overall transfers to the music, resolved highs remaining stable, crisp, and only marginally frail.

Another Gordon Liu interview from 2003, running 14-minutes. Alternate opening credits and promo materials hit the bottom of the bonus menu.

Disciples of the 36th Chamber