Although recycling the plot structure from 36th Chamber of Shaolin in totality, Return to the 36th Chamber changes the tone. This is a kung-fu comedy, and a fun one at that, mocking anyone trying a shortcut through life’s challenges.

Faking kung-fu skills for the working class, the myth and legends regarding these fighters is enough to keep unscrupulous Manchurian businessmen at bay; people fear the thought that a Shaolin Monk stands alongside exploited dye shop employees. Showman Zhau Renji (Chia-Hui Liu) soon finds his ruse failing, exposed, and journeying to the Shaolin Temple to train. There, he keeps up the lie.

Renji pretends to train. He tries, then fails. That’s the comedy, an endless cycle of errors and mistakes making Renji out to be a fool, if with a respectable cause. Return to the 36th Chamber does more than joke around with martial arts, even delving into toilet humor, unafraid to aim for laughs.

Where 36th Chamber of Shaolin was adamant about hardship, Return to the 36th Chamber says there’s no means to cheat this system – true sacrifice involves necessary pain to achieve one’s goals. When monks kick Renji from the Temple, he’s sent to manual labor, learning his skills while building scaffolding. Karate Kid Americanized this concept a few short years later, turning menial labor into an ambiguous lesson.

Lucky then it’s funny. Scaffolding construction isn’t exciting, so the humor offers a reprieve. Return to the 36th Chamber spends its time in anticipation of the finale, which given the limited brawls prior, has the choreography team’s full attention. It’s a multi-staged, one-against six fight using stools, bamboo, and fists in the best way. Return to the 36th Chamber ends on a grand, energetic clash with Renji demanding fair pay in the genre’s own style of union negotiation. Thankfully the build-up is just as fun. 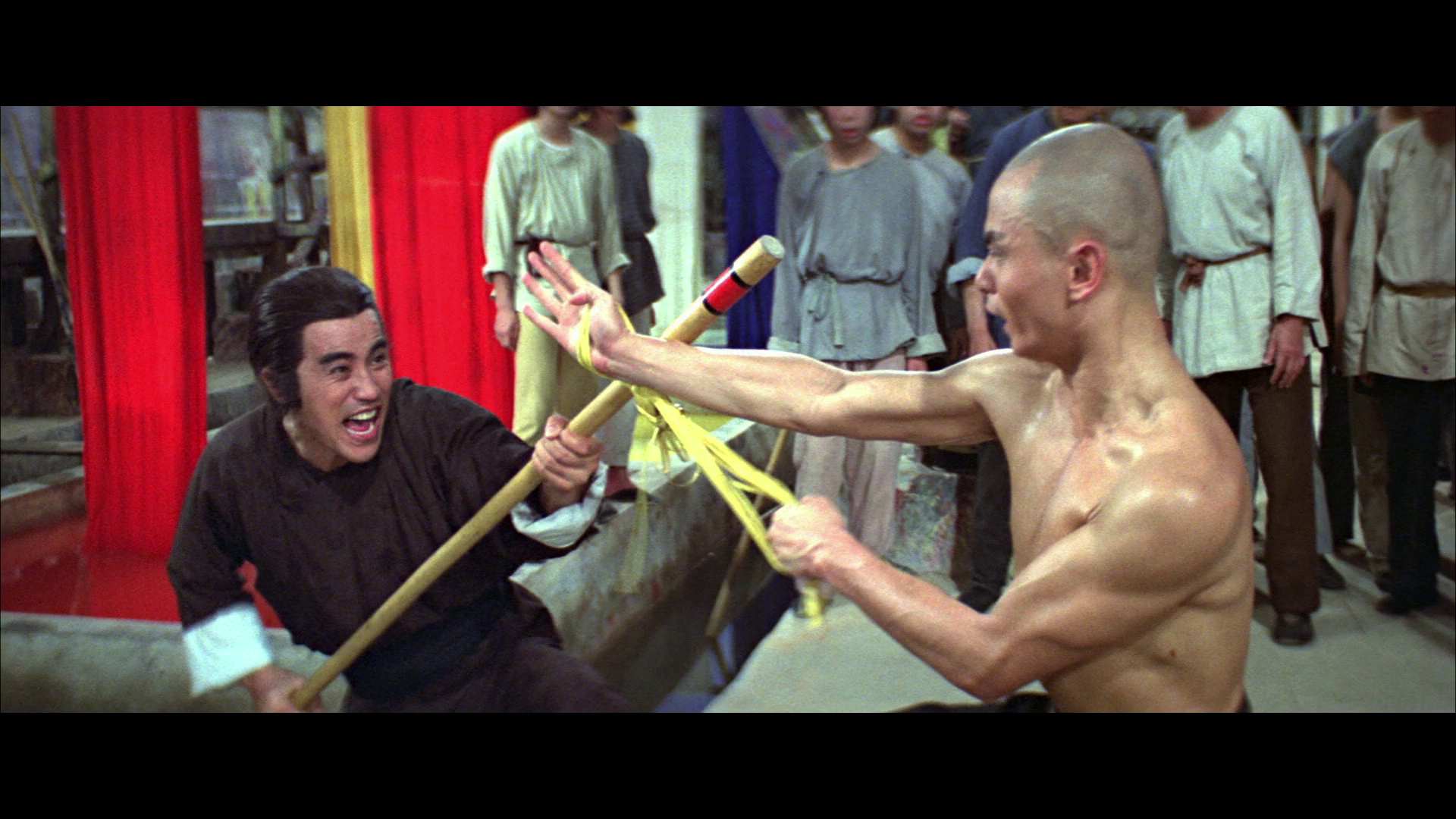 Set partially in a dye factory, color is an essential plot device in Return to the 36th Chamber, and those primaries sing in this transfer. Brightness in the reds and blues look especially bold. Natural flesh tones thrive in this environment too.

Outside of odd grain patches during the opening credits, this master preserves the film stock intact. Grain stays light, resolved cleanly. The scan looks lower res than some 4K scans, but it’s not an image without detail. Facial texture impresses when given the chance. Fuzzier cinematography tends to limit medium and long shots.

Hefty contrast clips in in the whitest parts of the screen, and dialed in black levels crush slightly. Both ends receive attention, if so much so there’s information loss. However, Return to the 36th Chamber appears aggressively dynamic, certainly not faded in any way.

DTS-HD brings Cantonese, Mandarin, and the English dub to this disc. Dated, faded dialog and a score lacking in range are par. Return to 36th Chamber sounds no better or worse than others in the Shaw Brothers roster. Thankfully, the condition is sublime, minus hiss, popping, or drop outs.

A 2003 interview with Gordon Liu opens this bonus menu. Next is a fantastic French documentary on Shaw Brothers that runs an hour, touring the studio as Return to the 36th Chamber was being filmed. For 14-minutes, the various kung-fu styles are explored. Promo materials and alternate opening credits bring this one to a close.

Return to the 36th Chamber