Filmmaker Pierre Tsigaridis crafts a ghoulish pastiche of well-worn horror tropes for Two Witches in his debut feature. Rough around the edges, there’s still something to be had from its brutally shocking thrills and an unnerving performance by one of its stars.

Virtually serving as a one-man band handling directing, cinematography, editing and contributing to the film’s soundtrack, Tsigaridis serves up a gloriously raw and gruesome homage to Suspiria and other vintage European horror films with a modern twist. Expect a dark dance of the macabre with horrifying witches serving up tasty thrills.

Two Witches would have been better off as two separate movies

In actuality Two Witches is two separate stories only tenuously connected together. The first half is a nasty piece of terror as pregnant couple Sarah and Simon fall victim to a witch who has cursed their coming baby. Potent forces of darkness are unleashed when the couple use a Ouija board with friends Dustin and Melissa. The visceral make-up and stark effects compensate for Two Witches’ largely forgettable ensemble and questionable direction in this opener.

Far more enjoyable and effective is the second story, which explores the growing tension between a young witch Masha and her grad school roommate Rachel. Actress Rebekah Kennedy shines here as the demented Masha, a woman who grows envious of Rachel’s life. The witch’s powers and evil intentions deliver a nasty surprise to Rachel’s friends and family.

Steeped in the ornate tradition of classic Italian horror, Two Witches would have been better off as two separate movies. Masha’s personal journey as a burgeoning witch coming into her own power is a wickedly evil satire of young adults living together in their 20s.

Rebekah Kennedy imbues the character with a sinister presence which commands the screen. There are delicious surprises lurking inside the simple premise which could have been expanded into its own feature. She’s a perfect fit for the role and oozes an evil energy which begs for an extended portrayal.

The first half is plodding and amateurish, more typically fashioned as indie horror gone sideways. If not for a crazy finish with shockingly visceral gore, it’s almost worth skipping. A conjoined tale of two very different antagonists, Two Witches feels like two jarring movies in terms of tone and style jammed together.

The bold filmmaking by director Pierre Tsigaridis clearly has its aim in the right place, perhaps limited by the small budget and an uneven ensemble cast. Two Witches is rental material for casual horror fans, though I expect its atmospheric visuals and memorable scares convert a few true believers. 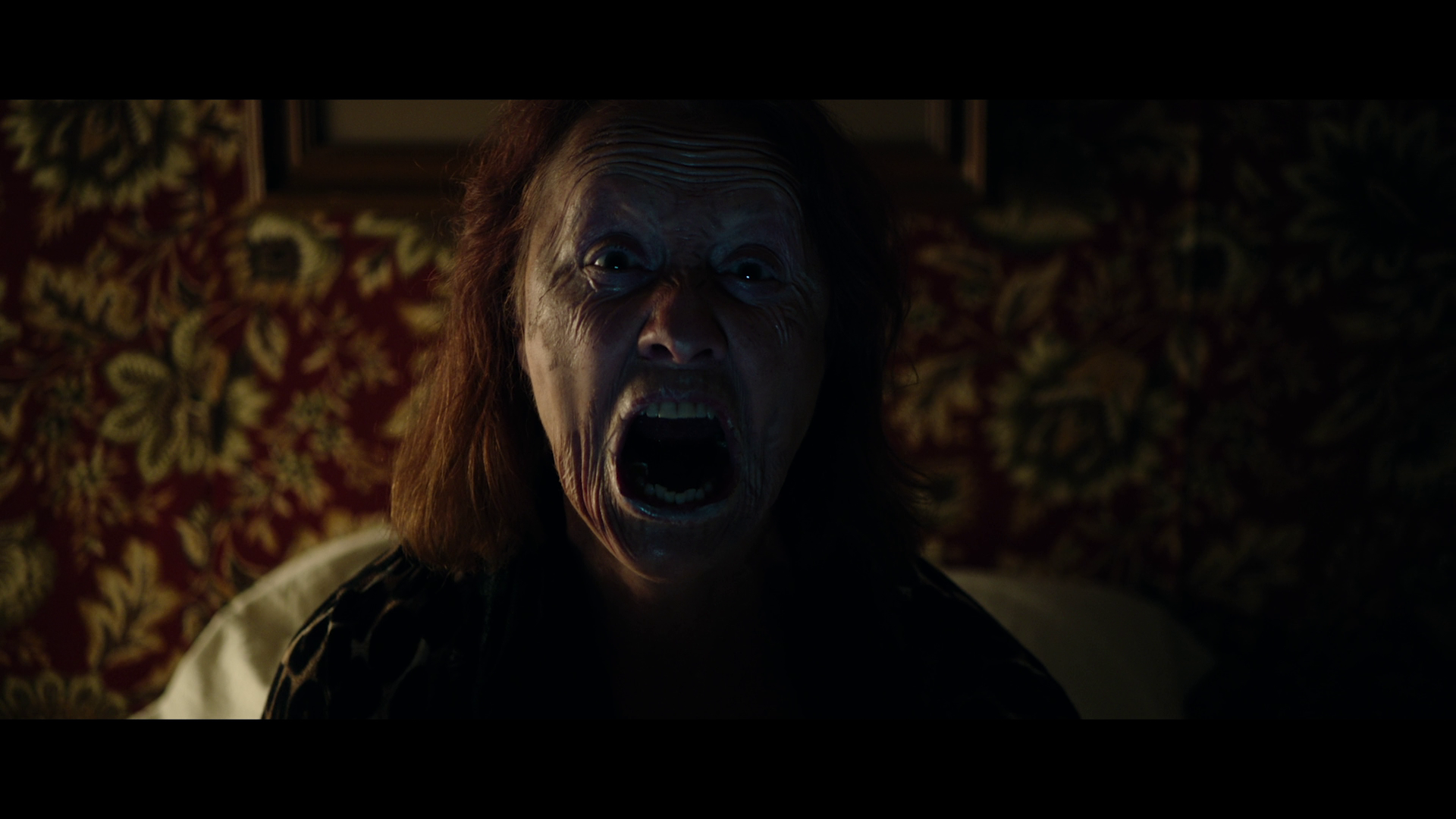 Two Witches has bright, overly glossy HD video thanks to an ARRI pedigree and erratic lighting. Oversaturated colors and intentionally hazy digital cinematography combine for a decidedly quirky aesthetic given the material. The 2.35:1 presentation receives fine treatment by Arrow Video, gifted a strong AVC encode on a BD-50.

Close-ups are a mixture of sharp imagery with generous fine detail and lesser quality shots. Clarity is generally strong with interiors suffering weaker definition and imperfect black levels, crushing shadow delineation in select moments. The indie production certainly has some appeal in terms of video quality but on the whole looks underwhelming.

Shooting on film is mostly dead in today’s cinema but Two Witches would have benefited a great deal from the tone and atmosphere only celluloid can provide.

The score is a chaotic mixture of industrial noises and orchestral washes on the shrill side. It’s a raw and unpolished mix designed for horror, delivering enough ambient action and presence for listeners.

Optional English SDH subtitles play in a white font inside the scope presentation. A secondary 2.0 PCM soundtrack offers the same clarity as its surround sibling with reduced imaging and a smaller soundstage.

The illustrated collectors’ booklet features an essay on the film by Anton Bitel, only available on first run pressings. Loaded with bonus features and attractively packaged, this is an excellent edition for the small indie horror project.

Interview with  actor and associate producer Dina Silva (15:54 in HD) – The actress who plays Melissa dishes on the movie.

The Boogeywoman (07:47 in HD) – An interview with actor Marina Parodi

The Original Score (10:44 in HD) – An interview with composer Gioacchino Marincola

The Piano Score (10:50 in HD) – Director Pierre Tsigaridis talks about the inspiration behind the piano score, notably Suspiria.

Behind the Scenes Image Gallery (HD)