There’s an epilogue tacked onto the end of To Kill a Mockingbird, an unnecessary comfort to offset the clear tragedy that came before. It’s there to provide victory in a story without any, a means for an audience to leave knowing these characters they came to adore will be okay. For anyone else, they’re left in mourning.

To Kill a Mockingbird is truly brilliant in its perspective, detailing racial prejudice during the depression from the eyes of children. They play simple games on simple American streets among simple American people. That’s how they see it. To them, their biggest worry is a weird house down the street, the type of legend and myth that terrifies the young. Their father shields them from the rest, until he can’t.

To Kill a Mockingbird remains a timeless, spirited time capsule

Atticus Finch (Gregory Peck), in both a literary and cinematic sense, is a quintessential fictional hero, a man so righteous and pure, everyone should aspire to follow his soft-spoken kindness. To his kids, he’s a masterful speaker, distilling society’s ills to their level without sheltering them from truth. In public, he’s a fierce protector of order, choosing to go beyond his duties as a lawyer to defend his client.

In his closing arguments, standing against an all-white jury sure to convict the innocent black man Atticus is pleading for, To Kill a Mockingbird doesn’t amplify Atticus’ words with music. It’s the film’s most dynamic, crushing scene, both for the overt racism being called out in a place where equality matters most and the sheer passion with which Atticus makes an obvious case. Yet, it’s for naught.

Caught in its own narrative trap though, To Kill a Mockingbird must end on the children, not Atticus, or the accused Tom Robinson (Brock Peters). So the trial isn’t the penultimate moment on which To Kill a Mockingbird ends. In being so pure against hate and bigotry, To Kill a Mockingbird becomes about the white family’s loss, not the grieving Robinsons who suffer only at a distance. Their presence is menial, an afterthought, to such a point they don’t even speak a line until the final 15-minutes. The focus is Atticus’ grief and guilt, which says less about the suffering of the deep south’s black families than it does the reasonably well-off white lawyer who couldn’t stop ingrained racism.

Yet, To Kill a Mockingbird remains a timeless, spirited time capsule concerning an ever-present hate that’s never lost relevance at its core. Childhood innocence never changes. Sadly, neither does ignorance. 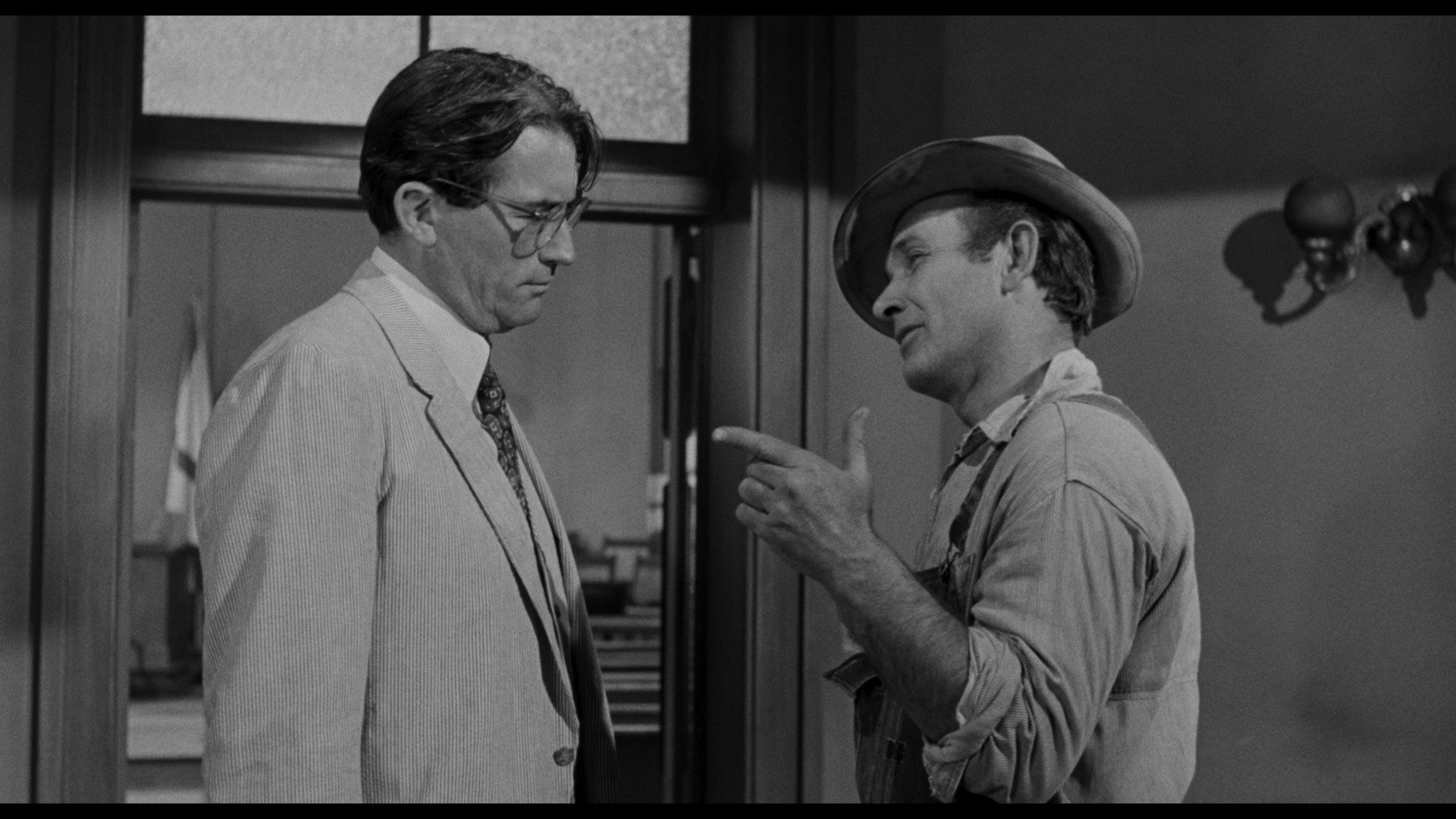 Universal shows off a clean, pleasing scan for this 4K debut, coinciding with To Kill a Mockingbird’s 60th anniversary. Grain is typically preserved well, a few shots rendered unnaturally smooth by noise reduction; this comes and goes, with no apparent reason or consistency. Look at the kids around 10:45, with their waxy clothes and faces. On the opposite end, it’s splendidly natural (and this is the norm), if not precise like comparable films of this vintage in 4K. Imagery runs slightly soft, if with little detriment to texture.

There’s detail aplenty to see around town, whether trees, wood on home, clothing, or hair. Definition overall makes gains over the HD presentation, however menial.

The only uncompressed track is a 5.1 DTS-HD mix; the original mono is offered, but only in DTS. Thankfully, the surround option respects the source, keeping the audio front-loaded to enhance the score and nothing else. Dialog remains centered.

Elmer Bernstein’s score is clear enough to sound recorded yesterday, even bringing slight low-end to the orchestration. For sixty years old, To Kill a Mockingbird’s music has no reason to sound this spectacular.

At 25-minutes, Universal puts together a new retrospective for this anniversary, featuring numerous interviews from scholars and critics. Next is a 90-minute making-of that’s a definitive look at the production. Another 97-minute piece is a documentary following a To Kill a Mockingbird screening and Gregory Peck interview. Peck returns with his best actor acceptance speech, a lifetime achievement award speech, followed by a post-death tribute. Co-star Mary Badham’s late ’90s interview discusses her involvement.

Note all of these bonuses reside on the UHD as well as the Blu-ray.

To Kill a Mockingbird

Masterful in its perspective, To Kill a Mockingbird finds the perfect method to show hate, prejudice, and ignorance despite its flaws.