A Twinkie for Khan

There’s plenty to say about Bill and Ted themselves, two west coast idiots facing a teenage firestorm – failing grades, angry parents, and social deficiencies. They talk like slang-obsessed surfer bros, pretend to play in a band, and it’s remarkable they function in society. For all their faults in the most late ‘80s/early ‘90s cliché way, their motto still holds true: “Be excellent to each other.”

Bill & Ted’s Excellent Adventure isn’t much of a movie, more a skit comedy stitched together by the slimmest pretenses. There’s more live action cartoon here than cinematic comedy (and a resulting animated series proved this true).

Bill & Ted found a way into the decade’s zeitgeist

Under pressure from parent’s groups worried TV and movies were rotting children’s brains, Bill & Ted took an educational angle to its humor. The result is the least educational thing Hollywood ever made under the banner of education, written by two 30-somethings trying to relive their high school horrors. The result is a weird, surreal journey through time that makes no sense and reaches for every laugh, yet in its own era, Bill & Ted cauterized the hair band-obsessed generation forever.

Although other examples exist on film and on TV, thinking back to late ‘80s rock culture on screen brings up these two, because Bill (Alex Winter) and Ted (Keanu Reeves) so perfectly embody that era’s slacker archetype to excess. Certainly turning this into a franchise helped, stretching across media types with again, the same “educational” mantra pushed into the marketing.

Other than learning Genghis Khan, Joan of Arc, and Napoleon existed, Bill & Ted doesn’t elaborate; it merely puts them in sketch comedy routines, bashing up a mall and creepily flirting with kids. Then in mere minutes, the duo sync the misplaced figures on stage for an elaborate, certain A+ presentation for their school. For slackers, they work fast.

For all of its lunacy and minimal sci-fi trappings, Bill & Ted found a way into the decade’s zeitgeist, mostly because the pair so outlandishly represent someone(s) everyone knew. The dopey gags, the goofy dialog, the dated lingo, and sheer nonsense on display was enough to create an attraction, much like a theme park – but with words. 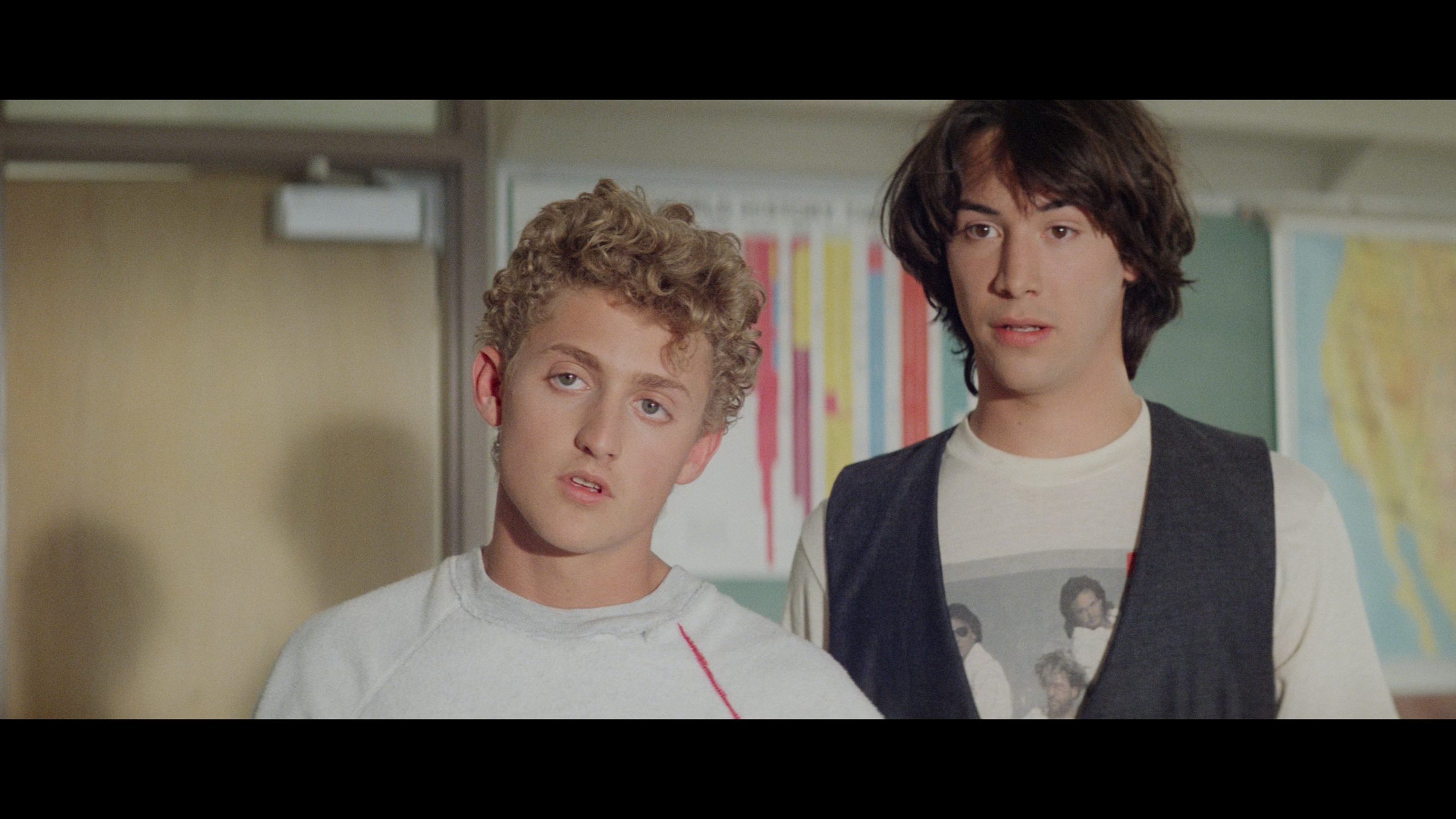 A reasonably colorful master brings the ’90s neon to life through Dolby Vision. It’s not exaggerated, just respectful and pure of the original source. Spot-on flesh tones pair well to the rest of the palette. Bill & Ted doesn’t show any signs that digital tools were used to alter the saturation, leaving things flattened compared to other movies from this era.

Consistent grain keeps its structure throughout, losing its organic look amid smoky scenery. Noise and compression impede the film stock. Brighter colors cause the same complaint in more complex shots, say the intro to the old west where rooftops collect artifacts. There’s enough detail, texture, and resolution to impress, if inconsistently. Facial definition in close gives Bill & Ted renewed life on this format, even with the issues elsewhere.

Lacking is density, black levels flat, dry, and even off-color in spots. Contrast doesn’t pop from the screen, adequate if marginal. Dolby Vision adds minimal punch aside from the visual effects, which spark and glow as the tech allows.

Both stereo and 5.1 tracks come in DTS-HD. There’s more life in the surround track, as expected, if not much. Channel separation as the kids fly through time sends sound effects around the room. The score filters into the positional speakers to create space. Otherwise Bill & Ted sticks to the front speakers, mostly a stereo track.

Bass thumps slightly when the phone booth slams down, or electricity crackles. Music brings a little range too, but in terms of the low-end, age is evident.

Alex Winter opens the disc, along with producer Scott Kroopf, for a commentary. Then a second commentary shared by co-writers Chris Matheson and Ed Solomon. In the extras menu, a new one hour retrospective that’s an… “excellent” look back at the production.