Thick in Biblical proverbs yet eccentric when treating the monster as an unwanted, misunderstood outcast, James Whale’s masterwork Bride of Frankenstein embraces the surrealism of the monster’s appearance. Always a tragic figure, Frankenstein’s monster becomes symbolic of outsiders, like Whale himself who lived a life sexually suppressed by outmoded social beliefs. This sequel treats the monster as if a witch during the Salem burnings, accosted and brutalized by fearful villagers living their lives based on religious text.

Also warped in their thinking, Frankenstein (Colin Clive) and Dr. Pretorious (Ernest Thesiger) use the Bible, but only to view themselves as greater than other men. Awakened after nearly being burned alive, Frankenstein sees himself as part of a “divine plan,” to become god – or another god all together. Pretorious’ bizarre experimentation creating miniature beings in jars preceded the genetic creation of “test tube” babies by decades.

Bride of Frankenstein snaps back at close-mindedness

The monster is not, of course, the villain, although the body count grows increasingly tragic. More than misunderstood, he’s helpless among the fearful populace. They’re controlled by an instinctual need to do malice to anyone different than them. Bride of Frankenstein elevates this crucial piece of the monster’s story, allowing the stitched-together being to communicate, even talk as in the original novel.

Serious as Bride of Frankenstein aims, it’s whimsy and charms overflow, the ambitions comic as much as horror. Whale satirizes his own life experience as an ostracized gay man, the countless wide-eyed close-ups from those in shock at seeing the monster wonderful in their outlandishness. Bride of Frankenstein opens on a stuffy mansion, Mary Shelly (Elsa Lanchester) serenaded by overwrought poetry. In Whale’s fictional world, that’s high-grade socializing, all the prim and proper tonalities accounted for. The monster lives more in a day, smoking and learning and wandering, than those affluent people do in years.

In the most underappreciated shot in Bride of Frankenstein, the monster is forcibly removed from a blind hermit’s home. then runs to a cemetery for his escape. In doing so, he climbs into a grave, backed by an elaborate statue of Christ’s crucifixion. To these villagers, the monster belongs underground, in hell, not alongside Christ. The image is startling, representing a lifetime of suppression at the hands of ignorance. Playful and outlandish as it is, Bride of Frankenstein snaps back at close-mindedness, and the slow progression that led to Whale’s own need to hide himself. 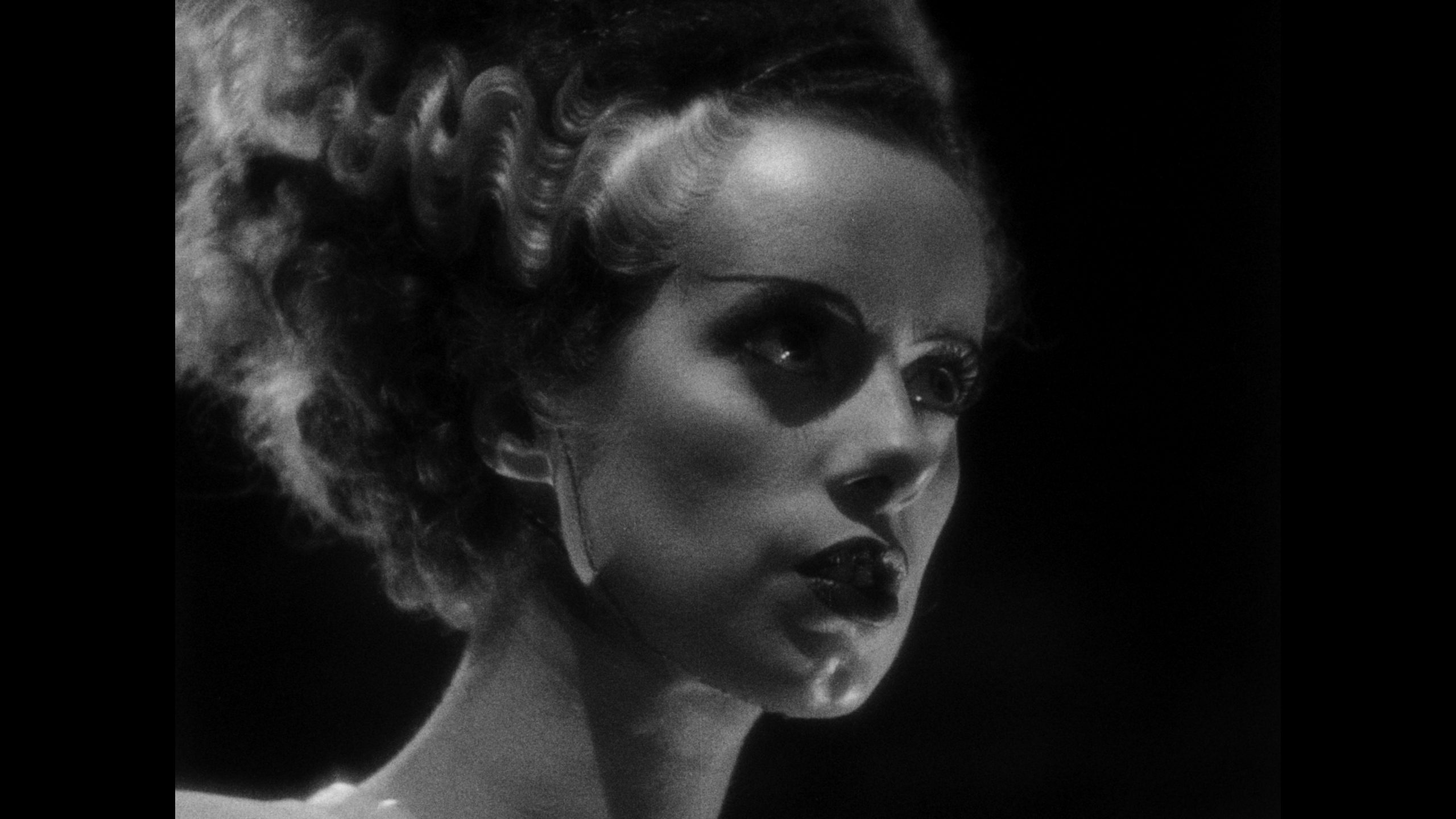 Not quite the looker of its contemporaries in the same box set, that’s not to say Bride of Frankenstein lacks in quality. Sharpness isn’t as precise as it is in the other 4K masters. Likely, this isn’t the original negative, but something close, accounting for the lesser resolution. Still a 4K scan, merely of lesser elements. Grain is thick enough to suggest a 16mm print, but that’s unlikely.

The result is heavier grain and reduced definition, the imagery relying more on the HDR than raw texture for the improvements. Bride of Frankenstein sports impeccable shadows, resolving pure black frequently. Torches and candles all make their mark, the range available in the contrast spectacular, elevating the sensational cinematography. Highlights glisten from skin and room decor, plus the various laboratory metals. The shimmering and intensity create enough improvements all around to off-set the minimal jump in fidelity.

Immediate highs are pushed through via this DTS-HD 2.0 mix, an active one in terms of materials. The score, which is almost constant, is fantastic. A slight hiss is maintained at certain peaks – certainly a means of maintaining fidelity – and the end result is a pitch perfect example of restored vintage audio.

Considering the original Frankenstein’s storm sequence, Bride of Frankenstein’s sounds like a decades worth of technological audio innovation occurred between releases. Thunder is no longer jarring, and the scoring blends flawlessly within the chaotic weather.

Free of pops or dropped frames to worry about, Bride is an aural winner for those who appreciate aged sound. Dialogue has a notable crispness, and degradation from generations gone has apparently been minimal.

Film preservationist Scott MacQueen heads up a commentary track to begin the slim extras. She’s Alive is the documentary attached to the bonuses, this one hosted by the awesome Joe Dante. An archive hosts 13-minutes worth of publications, posters, and photos to view. Trailers for each of the sequels are included, and a repeat from earlier in the set, Restoring the Classics, focuses on Universal’s 100th anniversary updates.

The Bride of Frankenstein

Less a monster movie than a social condemnation, Bride of Frankenstein is among the great achievements in hidden subtext and simultaneous entertainment.