“Even by 1943, this story had screen presence multiple times prior. Claude Rains performance only peaks in the closing moments, the rest of the film often plodding. Phantom of the Opera’s 1943 edition sells the operatic lifestyle with colorful side characters (Fritz Feld as a dismissive Lecours is outstanding) and fancy locations. The arc of romance is never strong enough, and lengthy stage sequences do little to push the story in any direction. They exist for the flash.”

Read our Phantom of the Opera Blu-ray review for more

The only color offering in Universal’s classic horror roster, this makes for a splendid, even eye-catching 4K performance. And yes, it is the color that immediately draws attention, especially the stage costumes draped in red velvet, and the theater’s gold chandelier. Saturation looks marvelous, vivid as it is rich. This looks entirely natural, untouched by digital tools, letting the film stock’s purity bring life to this disc.

HDR highlights give Phantom of the Opera a dazzling glow, whether from lights or reflections from metal pins/necklaces. The precision contrast loses no detail to clipping, and black levels provide the needed depth to make this pop.

Other than dissolve edits, the startling sharpness brings detail in droves. Texture that certainly went unseen during original theatrical screenings appears on this disc as if it were easy to master materials this well. Grain resolves perfectly, remaining indistinguishable from an actual film stock to all but the most well trained eyes. An odd scratch or dust particle appear at times; that’s not detrimental. 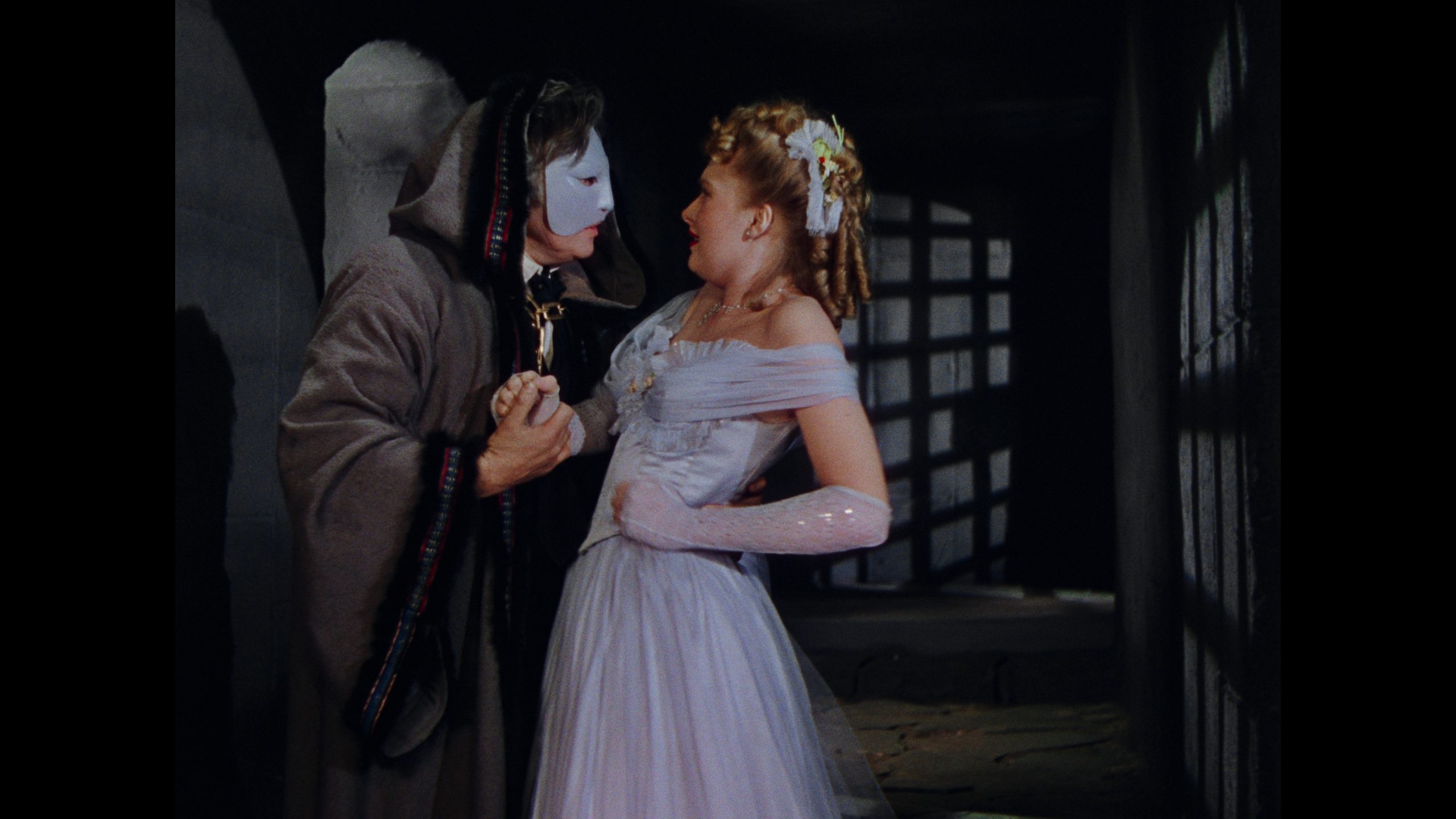 From this DTS-HD 2.0 mono affair, the score comes flying from the speakers with striking clarity. Opening drums have all of the force needed to convey their depth, and within the highs, you will not detect distortion. Opera scenes carry the vocals with amazing force, and orchestration backing the performances are crisp.

Age is never a factor here, the total lack of hiss or popping impressive. Fidelity and fullness are supreme qualities within this mix, while obviously imperative to the material. Enjoy it – this is a good one.

Historian Scott MacQueen pulls double duty with a commentary track while hosting a 50-minute look at the Phantom in The Opera Ghost. This feature digs into not only the Claude Rains version but many of the others while exploring their unique elements. Six minutes of scrolling production photos and a reused 100th anniversary piece, The Lot, are left.

Phantom of the Opera

Colorful as it is, Phantom of the Opera is a listless Universal remake with a few marginal twists expanding on the lore.