Creature from the Black Lagoon exists outside of Universal’s golden era of horror by nearly a decade. This is part of their second cycle, dominated by radioactive mutants and space-born menaces. Yet, there’s no question the Gillman belongs alongside Frankenstein’s monster, Dracula, and the Wolf Man; he’s just as iconic and for many of the same reasons.

Although America found terror in their nuclear age, Gillman remains an ancient, legendary beast – a sea monster, like Dracula was a creature of myth and the Wolf Man a curse. Gillman retains a lust, another Dracula-esque trait, although Gillman is less lustful and more instinctual. Like Frankenstein, victims in Creature from the Black Lagoon react to the monster with immediate fright, shooting and burning what they don’t understand. Universal adored tragic creatures; Gillman rates equally with the Wolf Man in unfortunate circumstances.

Onboard a boat sailing down the Amazon river, scientists hunt for an archeological breakthrough. In time, they’ll aggressively act against the Gillman, a misunderstanding caused by evolution and separated by millions of years. And yet, stars Richard Carlson and Richard Denning bicker and fight over the simplest disagreements. At the peak of their arguments and among themselves, they show less civility than the monster they’re tracking. During the first act, Creature from the Black Lagoon suggests evolution is a perfect device, refined and flawless. In time, Creature from the Black Lagoon detests that idea, and even that humans represent evolution’s peak – as a species, we always revert to our worst under duress. We’re just as instinctual as the Gillman.

More than the generic B-movie a plot description might suggest, the nuances Creature from the Black Lagoon possesses let the film sit among the grandest efforts in the studio’s resume. Science changed between the era of Frankenstein and electric reanimation. Science doesn’t harm people – people harm science. Splitting the atom, the hurt came to humanity directly, by choice, playing god, but one that doesn’t seek morality, but aggression. Creature from the Black Lagoon shows the greatest find in recorded history. All these men do is recklessly shoot it in its centuries old home.

Beyond that, Creature from the Black Lagoon is lovingly designed, both as a monster and a feature. Human enough as to not appear immediately alien in silhouette, yet different enough to look lost in time, the creature itself shows off an elegant, eye-catching mutation. Location footage in Florida produces a consistent restlessness, that anything might kill these men. The heat and isolation, paired with masculine egos, create the perfect cinematic boiling pot even without the title character. 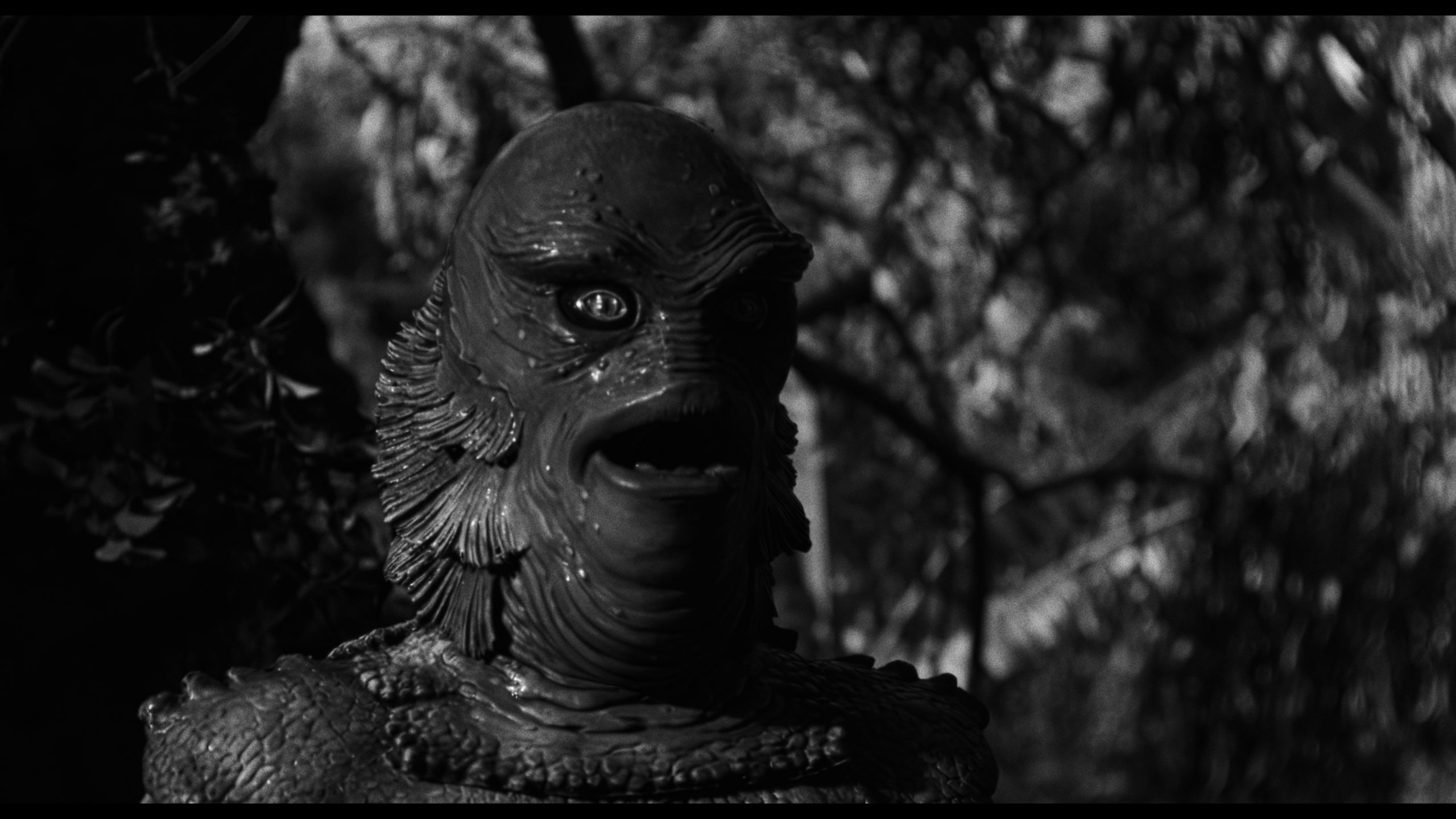 Make no mistake: the 3D version remains the definitive way to watch Creature from the Black Lagoon, and luckily, Universal includes that version inside this box set.

Ignoring that truth (and the dwindling number of 3DTVs still in use, sadly), the 4K edition is an appealing second choice. A mild smearing aside, this full 4K scan looks splendid in sharpness,. Fidelity pours from the frame when at its clearest. Sublime sharpness draws out definition, bettering the wonderful Blu-ray, even if it’s by a smidgen. Chemical dissolves cause issues (and Universal appears to apply DNR to lessen the impact), but that’s inherent at the source.

However, that smoothness creeps in elsewhere too, and it’s fair to ask if aggressive noise reduction was utilized throughout, then layered with digital grain to hide the results. Skin looks too smooth and waxy at times to be anything else. But then there are times where the detail is so spectacular, it’s not possible Creature suffered in the mastering phase.

Carefully applied HDR gives jungles their spark. Sunlight reflects from water with vigor. Highlights show consistent intensity, mixing well into the gray scale that’s likewise rendered gorgeously. Black levels hit their lowest point easily without a fault. Grain processes easily, and the encode doesn’t choke at any point. Whether it’s the original grain structure and not one added later, well, that’s a different argument all together.

A trio of composers contributed to scoring Creature from the Black Lagoon, the mix always working a balance between screechy highs and creepy lows. At the highest pitch, there is some minimal distortion to be heard. You can pick it out during the opening credits, although overall fidelity is excellent enough not to notice unless you are sensitive.

Music is absolutely critical here, with the underwater scenes lacking sound effects. They are driven completely by the score. The DTS-HD mono affair comes from a great source lacking in age defects, with dialogue reproduction that is wonderfully clear and precise.

Historain Tom Weaver hops onto the disc for a solo commentary track, while David J. Skal hosts Back to the Black Lagoon, a 40-minute look at the series. Eleven minutes of production photos, posters, and more scroll by, followed by trailers for the two sequels. A recurring 100th anniversary feature The Lot is included too.

Creature from the Black Lagoon