Went for a Little Walk

More than a story of life after death, The Mummy concerns love after death. Not just love, but obsession, lust, and eternal need. Its villain is the lover, killing for his cause after reckless archaeologists exhume his body. Universal monsters usually exude sympathy – Wolf Man for his curse, Frankenstein for his pain – but although Imohotep/Ardeth Bay (Boris Karloff) only wants to be reunited with his ancient Egyptian lover, he’s unforgivingly callous on his quest.

The Mummy is among Universal’s most stock horror movies of the original cycle (and the rudimentary sequels more so). Monster appears, monster kills, monster dies. Yet, The Mummy’s nuance comes from the carefully composed dialog, dealing not only in romance, but science’s ambitions. Produced during a media frenzy after King Tut’s tomb was discovered, The Mummy fits into Uni’s formula with that tinge of scientific anxiety. That’s the common thread, and characters unwrapping the dead and discussing moral implications is unusually progressive for the time.

The Mummy lets Karloff be Karloff

Hunting for a scroll, Imohotep kills because scientists won’t relent their prize. They pay for what The Mummy considers misdeeds, choked to death off-screen by Karloff’s looming figure. All the while, Imohotep’s lust for his bride grows. Where the archaeologists deny the dead their peace, Imohotep refuses to accept the living theirs. There’s a marginal tragedy in Imohotep’s being, forced to live endlessly in agony for a woman he cannot have. Yet, he’s an evil figure, imposing by choice, forceful in his methods not by mere love, rather a need to control others and submit them to his will.

Sequels formed the iconic visuals that appear in pop culture. Other than in his introduction, Imohotep doesn’t stalk his victims covered in bandages. The Mummy lets Karloff be Karloff, an undead creature, and a thinking, verbal one, paired well to Dracula. The latter mercilessly killed for sustenance, and Imohotep for a centuries-old want.

That’s key – Imohotep was entombed for his forbidden romance, which in the modern day, turns into unwanted advances by a male figure who thinks he deserves this woman. His crime? Failing to accept anything less than complete submissiveness. Neither culture accepts this devilish man because what in his mind is love, becomes an unwilling, cruel, controlling, and fantastical terror for all involved – including an audience. 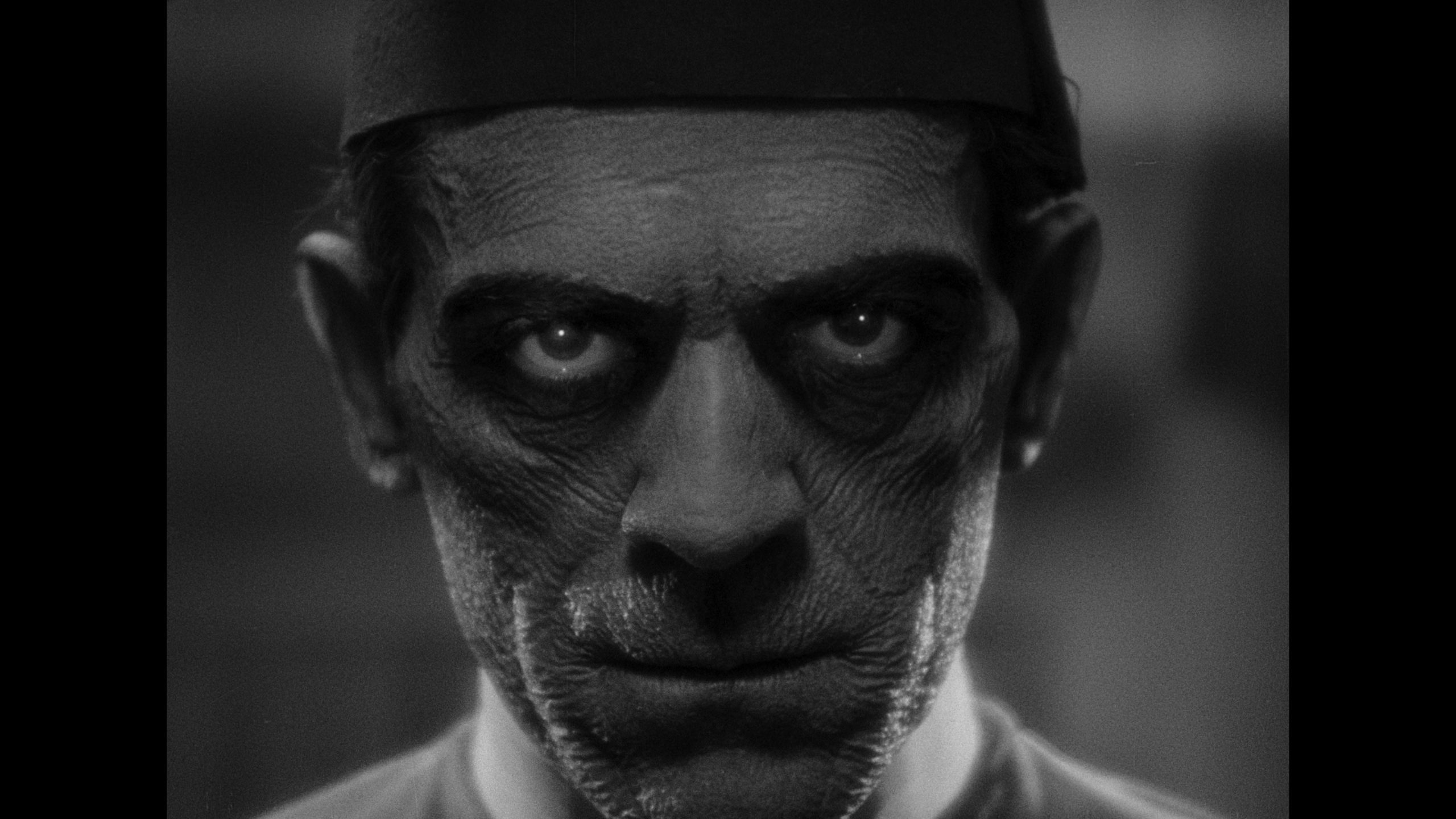 Aside from a few moments where the gradients fail to resolve smoothly, this another sensational Universal 4K entry for their monster classics. Beautifully rendered gray scale swerves between luscious shadows – the densest blacks – and vivid highlights, while the in-between looks equally grand. The original cinematography is not only preserved, it’s bettered by this presentation. No one who saw The Mummy in 1932 saw it looking so brilliant.

Extensive preservation eliminates most faults on the print, leaving The Mummy pristine. With a full 4K scan, detail swells. Behind the well resolved grain structure, wherever the source material chooses sharpness over a romantic haze, texture reaches an extreme. Facial definition shows in every close-up. On Karloff’s makeup, fine sand and rotting cotton appear at their fullest potential. Richness in the location photography fills the screen in wide shots. It’s marvelous.

The Mummy opens with the same Swan Lake theme shared by Dracula, so ignoring the fidelity lapses on high and low ends, the DTS-HD mono effort is still impressive. The score is intact and relatively clean given the separation of time. Some lackluster peaks are hardly discouraging.

Static has been removed from moments of silence as to not keep it steady for the entire running time. Dialogue is typically spoke with a mild undercurrent of hissing, kept to a minimum and so light, most will not notice.

Skipped frames within the video are the biggest concern. A word is lost at 13:38 due to a missing frame, and another instance later sounds rushed. In the scheme of things, it’s a minor intrusion, the concern lying solely with this mix in particular compared to quality evident elsewhere.

On the UHD (and included Blu-ray) dueling commentaries are up for your attention, the first crowded with Rick Baker, Scott Essman, Steve Haberman, Bob Burns, and Brent Armstrong. If you like commentaries more sedate, film historian Paul M. Jensen goes solo for the second track.

Mummy Dearest is the first non-commentary bonus, a half hour look at the legacy of the series hosted by Rudy Behlmer. He Who Made the Monsters follows, a deserving look at make-up legend Jack Pierce. Unraveling the Legacy of the Mummy is a short look at the franchise. Archives delves into the realm of posters and marketing, and trailers are offered for each film in the series. 100 Years of Universal: The Carl Laemmele Era is a tribute to the great producer.

The Mummy is among Universal’s elite even with a routine story thanks to the imposing presence of Karloff in his prime.