In its own way, Rumble connects to some of professional wrestling’s easy, mindless appeal. There’s a smaller underdog wrestler (in this case, ironically, a giant monster), working up through the ranks to challenge the larger heel who abandoned his hometown. In wrasslin’ vernacular, that’s cheap heat. Rumble uses that a lot.

For such a simple sports movie for kids, Rumble introduces numerous plot threads, some that go nowhere. Hero Rayburn (Will Arnett), lacking in self-confidence, owes money to a sleazy bookie. Rayburn’s dad mysteriously disappeared at sea. Neither story goes anywhere, the latter an empty character building device, the former seemingly resolved if not clearly.

There is the centerpiece as the town might lose their luxurious wrestling stadium and their economy without a champion. Anti-capitalism themes embedded, Rumble finds an easy villain in the social media maven looking to turn the place into a parking lot, a central storyline that’s enough to carry this forgettable animated fare to its predictable conclusion.

It’s a likable tale, mixed with Rocky, pop music, and a theme about being yourself. Rayburn finds his method in dancing, drawing ire from commentators wishing to preserve the sport as-is. Salsa-ing across the ring, Rayburn enjoys the opportunity, shutting out the noise because dancing defines him. It’s pleasingly sedate, maybe a little charming, and certainly colorful.

Produced partly by WWE Studios, the links to actual pro wrestling are oddly slim. Popular names Roman Reigns and Becky Lynch voice bit part characters and entrance themes back a few scenes, but Rumble creates its own rules. Matches take place over rounds, and a win comes from a 10-count knockout akin to boxing. Kids who find Rumble enjoyable might not take to the actual thing, especially sans monsters (except the likes of AEW’s Luchasaurus…). And those appeased by pro wrestling might find the alterations irksome. Rumble doesn’t satisfy either camp, even if it’s fast moving, shiny, and stuffed with pop culture references. 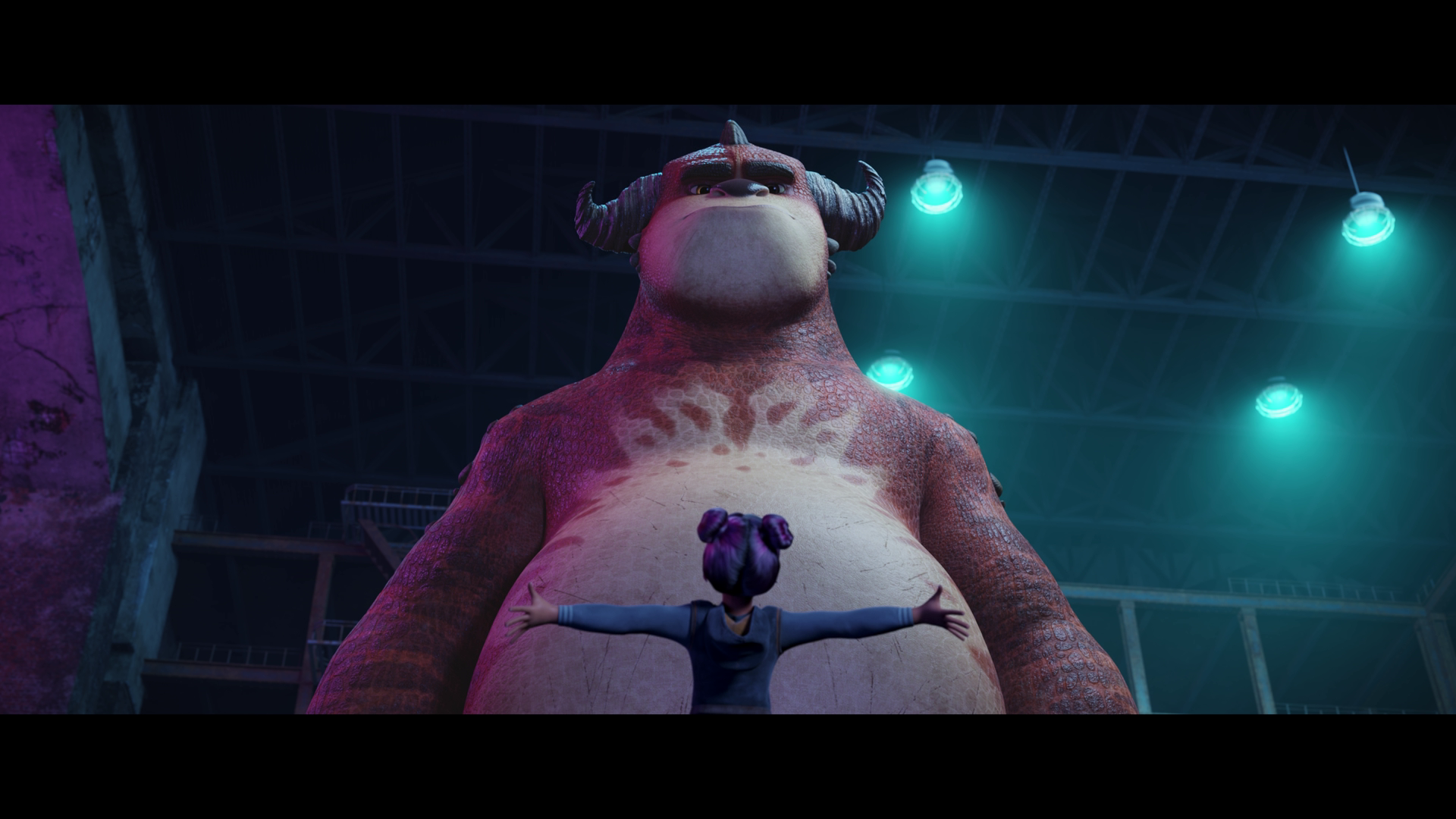 Significant moments of banding and the slightest aliasing knock a point off this animated feature. Those mark the only complaints though in this pristine, sharp, and hyper colorful feature. It’s a shame Paramount didn’t offer a 4K release given the intensity, from stadium lights to pyrotechnics or even glistening skin. Rumble begs for HDR, but as is, still impresses via the brilliant contrast. Dimensionality adds a 3D quality to the visuals.

While the source animation isn’t matching the likes of say, Pixar, the textural qualities shine. Clothing and monster hides show detail galore. Wide angles show the town of Stoker at its best.

Saturated color is everywhere throughout this movie. Warmed hues add a hefty vibrancy, the flesh tones vivid and primaries glowing. Hardly a scene goes by without some eye-catching splash of reds or blues or greens. It’s a constant performer.

Given the monster’s size, the wrestling matches themselves need an added kick in the low-end. Body slams and elbow drops produce weight, if lessened compared to the intended scale. Music can carry more bass than the physical action. Still there’s range to enjoy for home theater owners, even if it’s disappointing.

Surrounds play nice, tracking the movement smoothly. Punches and tails swipes push through the soundstage, while crowds fill every speaker as they cheer. Rumble’s consistency matches the animation precisely.

The beefiest thing in the bonuses are the deleted scenes because the rest barely even qualify for EPK status. Featurettes on dance and wrestling moves, a look at the characters, and the briefest possible peek at the animation process make this entire section skippable.