The story of how Cool World got made may be a more entertaining movie than the box office flop itself. Intended by Paramount to be a summer blockbuster emulating the success Who Framed Roger Rabbit had experienced just four years before with its 1992 premiere, director Ralph Bakshi had visions of an R-rated movie mixing animation and live-action with highly adult themes.

What was imagined as a dark film noir in an animated fantasy world became a strange PG-13 concoction by a desperate studio, which never really finds its target audience. Too adult for children and too childish for adults, Cool World features one of Brad Pitt’s earliest leading roles and Kim Basinger portraying an animated blonde bombshell looking for sex. Gabriel Byrne here does everything he can working with a sub-par screenplay, investing his character with far more depth than his Jack Deebs deserves.

Cool World is a disappointment but the animated sequences are immensely creative, bursting with passion and raw energy

The animation is actually quite interesting coming from a Hollywood studio, highlighting much darker underground fare than vintage homages to the 1940s and 1950s we got from Roger Rabbit. There are several ingenious touches in the art and animation, probably the only reason to check out this awkwardly bizarre story. A young Brad Pitt isn’t terrible but they cast him in the wrong role. Cool World would have worked better with Pitt and Gabriel Byrne switching lead roles.

Jack Deebs (Gabriel Byrne) is a cartoonist who created Cool World while in prison, an elaborate cartoon series inspired by detective novels and the noir atmosphere of classic cinema. Jack discovers Cool World isn’t just a fictional place but another dimension in which his cartoon characters all live together. There are even ways for humans to jump into Cool World with unpredictable and dangerous results.

A sultry animated vixen named Holli Would (voiced by Kim Basinger) yearns to break free from her animated environment by having sex with a living human. The only law in Cool World is that doodles (cartoon characters) can’t have sex with noids (a nickname for flesh-and-blood humans like Jack). It’s rumored the forbidden sex turns cartoons like Holli into living people.

Brad Pitt plays straight-shooting detective Frank Harris, a regular human who was trapped in Cool World decades ago. He’s been “dating” a cartoon dame inside Cool World but has so far avoided breaking the land’s most serious law. Frank investigates when Deebs shows up looking for Holli, suspecting the pair are up to no good. The clunky plot gets even messier when Holli achieves her desires.

It’s amazing Bakshi was given free rein and a sizable budget to work out such an odd premise in a Hollywood blockbuster. The uneven adult tone and frankly sleazy premise aren’t the stuff of box office success, constrained as they are by a PG-13 rating. After a dismal opening week, an embarrassed Paramount practically pulled the presumed blockbuster from theaters. It’s a testament to Brad Pitt’s star power and charisma he overcame this early flop to become one of Hollywood’s biggest names in the 1990s.

Cool World disappoints but the animated sequences are immensely creative, bursting with passion and raw energy. Impressively original, the visuals alone are almost worth the price of admission as Bakshi and his animators explore film noir from a stylishly animated perspective. Kim Basinger is kind of fun riffing on a Marilyn Monroe-like bombshell, taking a page from Jessica Rabbit and going the next logical step.

Cool World is ultimately a failure but it’s safe to say it’s a well-meaning failure which takes risks, an increasingly rare commodity in modern Hollywood. 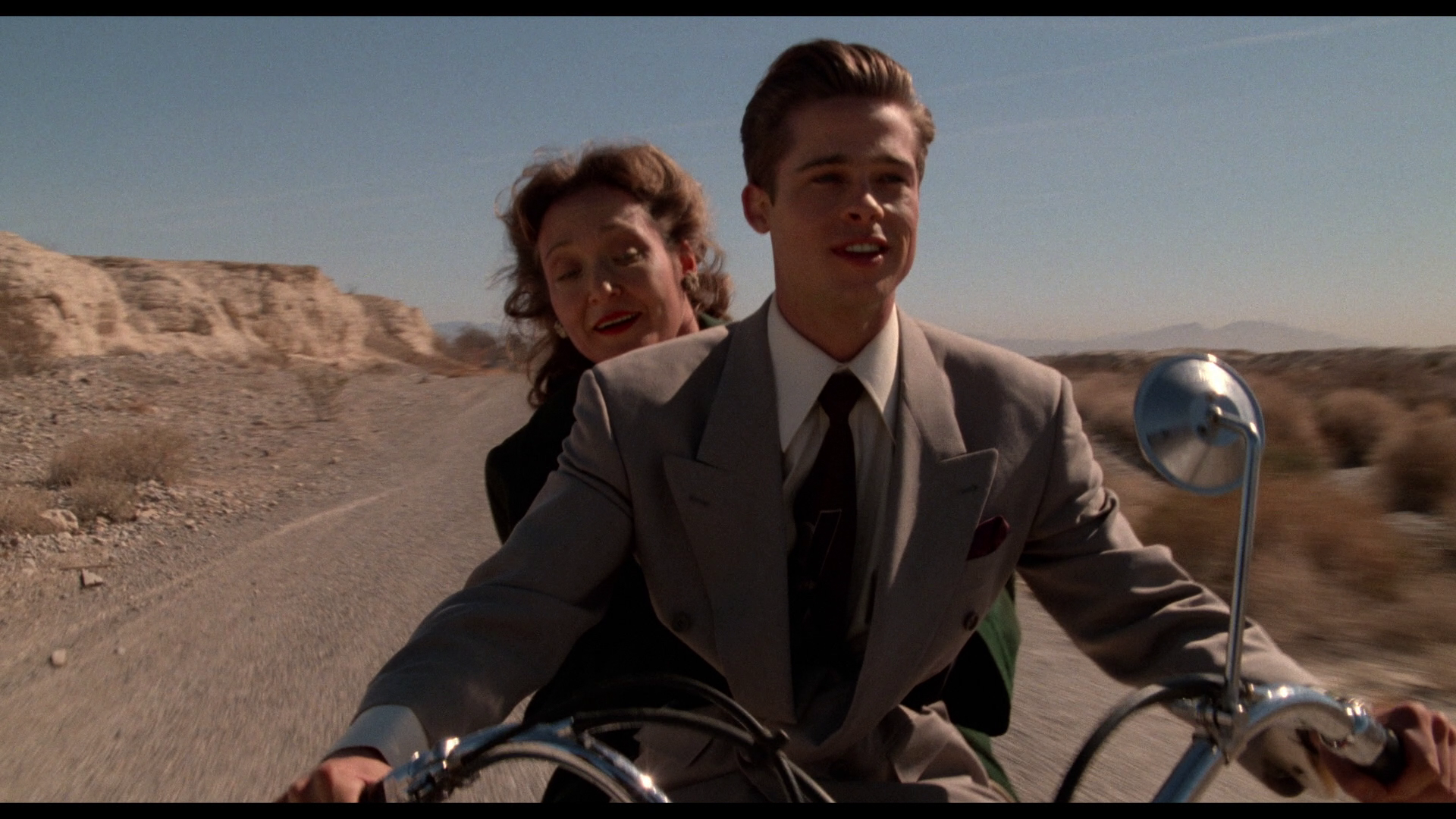 Director Ralph Bakshi approved this beautiful new 4K transfer struck from Cool World’s original camera negative. Shout Factory licenses the transfer from Paramount, who has been churning out quality catalog transfers the past few years across a wide variety of classic film stock.

The exotic blend of animation and live action in the 1992 movie doesn’t always mesh smoothly but the unique aesthetic is splashy and often colorful. Hitting Blu-ray for the first time nearly thirty years after the movie failed in theaters, Cool World looks far better than expected. This disc is about as good as it will ever look.

The animated material is highly unique, Bakshi let his animators go wild creating a dark atmosphere. It’s less a nod to classic vintage Hollywood animation than to hip underground cartoonists focusing on strange and distorted geometry. There’s a seedy vibe to the foreboding backgrounds. Fairly amazing a Hollywood studio like Paramount sunk big money into adult animation like this aimed at mainstream audiences.

The elements are in shockingly pristine condition. The film-like presentation is unfiltered without the influence of undue processing. If not for a few hokey scenes of human actors attempting to interact with animated characters, this is seriously excellent 1080p video from sharp cinematography.

Cool World’s 5.1 DTS-HD MA surround audio sounds great with clean separation and interesting sound design. A wonderful score from composer Mark Isham and a handful of pop songs, including a tune from David Bowie playing over the credits, offer an engaging listening experience in full fidelity. The big budget production includes impeccable dialogue reproduction and an expansive soundstage which immerses you in the zany cartoon landscape.

Cool World is #138 in Shout Factory’s Shout Select line-up. Labeled a collector’s edition, there’s a new retrospective featurette and not much else for the box office failure. Which I guess is better than the barebones DVD Paramount put out years and years ago. Surprisingly Kim Basinger shows up for an interview, though Brad Pitt is missing in action as expected.

The disc is coded for Region A.

The Wild Minds of Cool World (21:58 in HD) – A look at the making of the film featuring new interviews with director Ralph Bakshi, Kim Basinger and producer Frank Mancuso, Jr. This behind-the-scenes documentary hints at the troubled production as Paramount wrestled the movie away from Bakshi’s original vision. Basinger certainly seems proud of her work on the movie, discussing how she shaped Holli’s character.

A box office flop starring a young Brad Pitt and a sultry Kim Basinger, the Roger Rabbit-inspired mix of animation and live-action is an interesting failure.