Scream 2 needed to happen. The observant genre joke isn’t complete without at least one sequel, lambasting the studio churn effect whenever executives sense a hit. This script doesn’t miss the chance to take the horror cycle to task.

Like the original, Scream 2 delves into a critique of horror cinema, with a sly, crisp awareness that approaches not only slasher movies, but their cultural weirdness. In a splendid opening, Scream 2 touches on racial boundaries, media frenzies, and the unexplained bloodlust people share during screenings. It’s sharp, showing a theater full of mask-wearing, fake-knife wielding killers hollering and cheering as a woman dies on screen. Consider those twisted events are based on “real” events in Scream’s universe, and the whole thing becomes perverse.

Scream 2 stays in its lane, pedestrian kills and surprises in tow

Also consider the profiteering – the movie studio handed out those costumes, reflecting the dollar-making obsession that led to people donning O.J. Simpson masks after those grisly murders. Directly too, Scream 2 engages in the political posturing around violence in the media, which was less about movies in the mid-’90s than videogames, but it fits. When the killer reveals their plot, the snide jab about Christian groups paying for his defense isn’t wrong. Seeing the movie industry burn is a far right conservative dream.

Aside from its ruminations on the state of things though, Scream 2 stays in its lane, pedestrian kills and surprises in tow. Sydney (Neve Campbell) remains the series’ interesting core, dealing in the after effects from the first Scream, hounded by media and mental strain. A dialog comparison to Halloween’s Laurie Strode is an accurate one, not just for her ability to fight, but her method of dealing in such extreme trauma.

Scream 2 is a partly smart follow-up, less concerned with the slasher tropes and how best to utilize them than it is mocking the fear around horror films while calling out those seeking to score points by exploiting those cycles. The media, well beyond Gale Weathers (Courtney Cox), swarm around this movie, always poking a microphone in a character’s face to keep these stories viable. Through that, it’s fun, but acknowledging the sequel’s inevitable flatness. 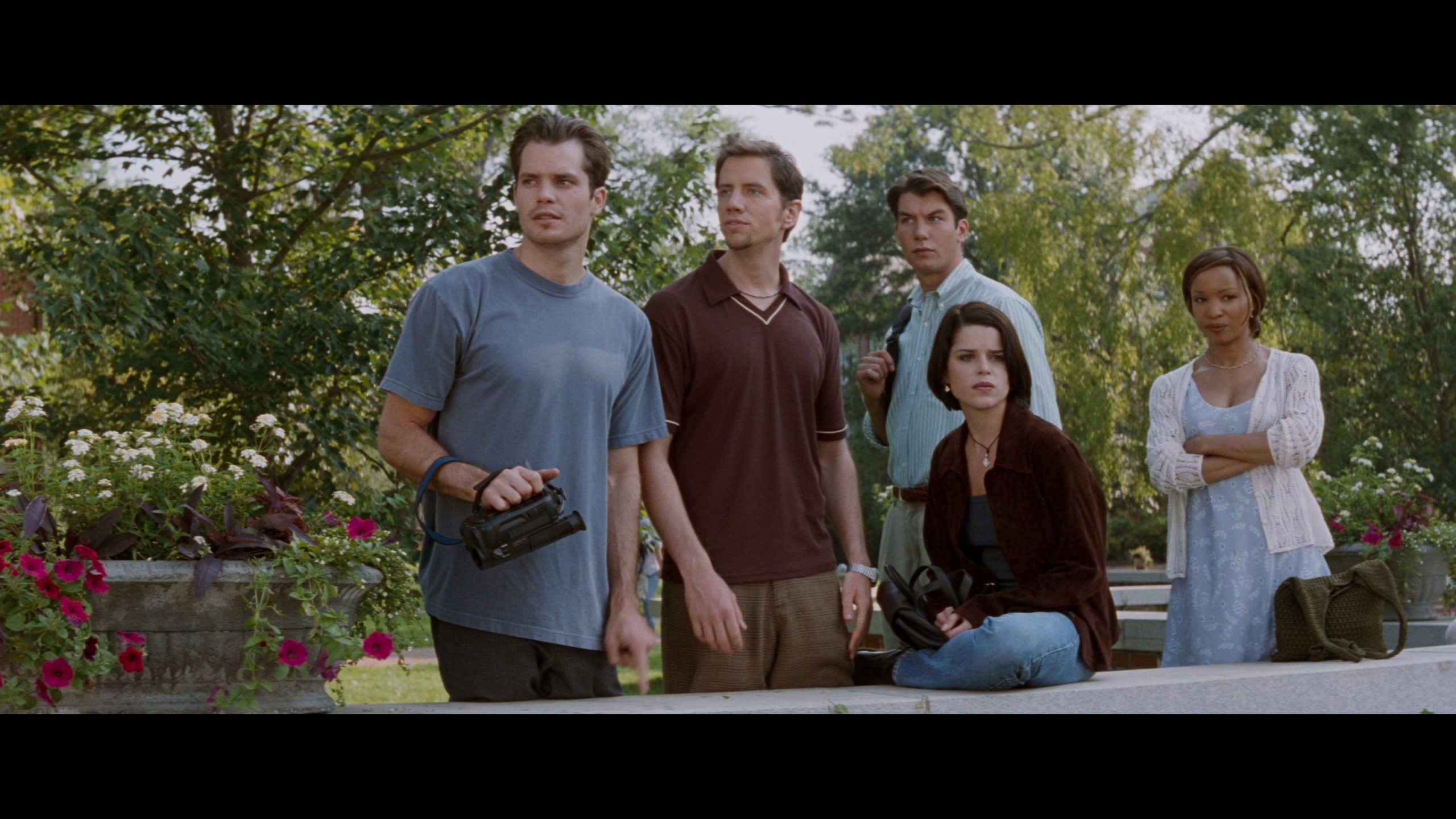 Adequate enough, Scream 2 doesn’t look like it’s received a full 4K master. Average definition displays the minimum texture expected of this format, and it’s better than the Blu-ray only due to the ugliness of that disc. Grain appears, clear too, but unusually thick in places.

This all applies to the contrast too, rudimentary in its brightness. Highlights apply a marginal push to enhance themselves. At least black levels show heft, if nothing special. Shadow density hits true black at least.

Copying the DTS-HD track from the Blu-ray, it’s a fun effort. As CiCi (Sarah Michelle Gellar) is stalked by Ghost Face, he tumbles over something, the sounds planted firmly in the rears. Audio choreography is strong overall, stereos plotting the movement of cop cars, and the surrounds keeping busy with ambiance like birds or insects chirping.

The subwoofer is given some clean, tightly calibrated low-end work to play with, from the killer pounding on some glass at 1:22:53, to the score, which when ramped up, gives off some solid range on both ends. The music wraps-around effectively, or at least as strongly as the theater crowd in the opening scene. They scream, yell, and holler with the best of them, this DTS-HD mix capturing the world’s most annoying theater to perfection.

Scream 2 still shows some creative life as it mocks itself as much as the genre’s sequel norms.