Stuart Burge’s handsome production of Julius Caesar has been unfairly maligned for years thanks to a dull performance by Jason Robards and inevitable comparisons between it and the acclaimed 1953 adaptation starring prime Marlon Brando and John Gielgud. Robards is no great shakes as Brutus and woefully miscast as Rome’s moral guiding light, but the remaining all-star ensemble largely live up to their pedigrees.

Charlton Heston as Marc Anthony, Richard Chamberlain as Octavius, Richard Johnson as Cassius, Robert Vaughn as Casca, Diana Rigg as Portia, and they even bring John Gielgud back playing Julius Caesar this time around. A small cameo from Christopher Lee is also noteworthy. The cast is up to the daunting task, delivering the eternal words of Shakespeare in clean portrayals of some weight.

Jason Robards isn’t terrible as Brutus, merely underwhelming. The fine actor had a long and productive Hollywood career but has trouble here portraying the internal turmoil faced by Brutus. Fellow American Heston restrains himself from the unabashed scene-chewing he so loved in his earlier days, delivering a manly Marc Anthony. Robert Vaughn is quietly a revelation, masterly commanding every scene he’s included. Mostly known for television, Vaughn’s performance recalls his early Oscar nomination for The Young Philadelphians.

The first color adaptation of Julius Caesar on film, Burge’s screenplay sticks to Shakespeare’s dialogue rather nicely while boasting lavish production values. Fashioning the conspirators’ struggle against Caesar as inevitable and necessary, omens abound as the conquering Roman meets his fate at the hands of the Senate in an epic scene.

Led by the ambitious Cassius and reluctantly joined by a civic-minded Brutus fearing the Republic’s end, the conspirators secretly plot Caesar’s assassination. Even Caesar’s ally and friend Mark Antony cannot save him; the internal struggle for power afterwards results in a bloody war.

Beware the Ides of March as they say but give this fine screen adaptation a chance. Burge’s version is a well-directed, competent, and engaging production with a star-studded cast giving excellent performances. Julius Caesar works because it avoids contemporizing the inherent moral and political dilemmas faced by its vividly drawn characters. 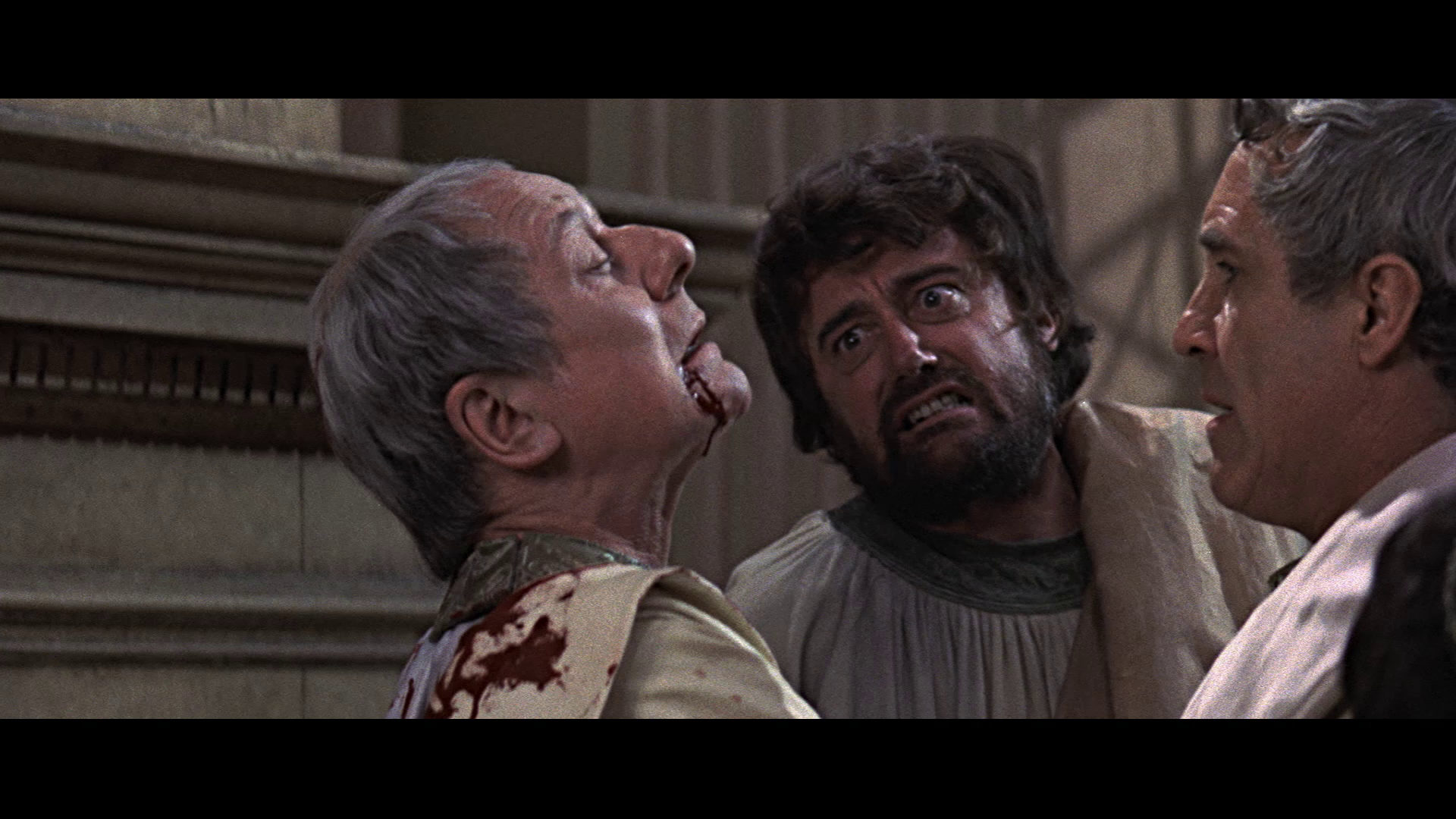 Imprint does what it can with a HD transfer likely pulled from the Paramount vaults. The 1970 film gets a proper and authentic 2.35:1 presentation in soft 1080p video. Definition is stronger than DVD but middling texture and noisy grain reproduction indicate an older transfer. Picture quality is disappointing but not disastrous.

The main feature run 115 minutes on a BD-50 in mostly transparent AVC. There’s no noticeable wear in the film elements, though colors run flat and dull. Minor crushing occasionally hampers black levels. The contrast is serviceable but not outstanding. A hint of ringing at times creeps into the video. There’s no overdue filtering but grain structure is messy.

Definition and clarity are certainly less impressive than a newer 2K or 4K film scan from the negative would produce. The existing transfer was possibly struck with DVD in mind, resulting in less-than-stellar detail and actual resolution than is possible. I doubt the Olive Films’ Blu-ray release, nearly a decade old by this point, looks substantially different and may very well come from the same basic telecine effort.

Optional English subtitles appear in white outside the scope presentation.

Thank you, Imprint! The collector’s label out of Australia has created an all-new lineup of exclusive special features, big news for a movie which had never really seen anything before on home video. Olive Films put out a Region A disc back in 2013 but that was completely bereft of extras. An absolutely essential grab for the movie’s fans, even if they own prior editions.

Julius Caesar (1970) is #133 in Imprint’s collection, arriving in an attractive slipcase limited to the first 1500 units. The disc is coded for all regions.

Audio commentary by Cinema Retro’s Lee Pfeiffer and film historians Paul Scrabo and Tony Latino – A new 2022 commentary which delves into the cast and pointing out differences with the earlier adaptation.

Full disclosure: This Blu-ray was provided by the label for review. This has not affected DoBlu’s editorial process. For information on how we handle review material, please visit our about us page.