Ash (Bruce Campbell) can fire a shotgun without looking, chainsaw demons with his chainsaw hand, and spout epic one-liners better than Willis, Schwarzenegger, or Stallone. He’s the perfect action movie star, a dream-like fantasy escape into the ultimate screen masculinity – and also an idiot.

That’s what separates Army of Darkness from the ‘80s glut of muscle movies. It allows Bruce Campbell to embody everything great about genre cinema, in both horror and action, yet with a satirical, almost sitcom-like stupidity to make Ash a genuine character.

Army of Darkness turns gangbusters for its finale

For the target audience, Ash is an every man. He works housewares at an indistinct retail store, as boring a man as the silver screen ever presented. Yet, Ash takes his dry, bland comically male worldview into the past where talent doesn’t mean anything. He’s superior because they’re inferior, a role reversal where he’s the department head instead of a price-stickering lackey. This isn’t a case of raw skill, training, and testosterone conquering an enemy; it’s an accident. That’s the joke, and it’s a damned good one.

There’s obvious potential in fish-out-of-water humor. Initially, Army of Darkness takes that route… until the boomstick. In minutes, the agitated, irritable Ash lashes out and through fear, is crowned a leader. Now the laughs change from awkward to sustaining the illusion, keeping the primitive medieval people believing what Ash sees in his own mind. That’s even funnier.

Army of Darkness turns gangbusters for its finale, the setup complete, Ash defined, and the tributes endless. Stop motion skeletons pay heed to Ray Harryhausen, practical puppets nodding toward Jim Henson, and the idiocy of the entire thing genuinely fond of B-grade exploitation. Relentlessly quotable already, the good/evil clash pours on the cleverly written schlock, delivered with the proper wink as to keep Ash the hero, if still a buffoon.

Universal mandated a happier ending rather than the original cataclysm, and while the latter is ironically funny, it’s a rare case where that choice doesn’t mangle the message or the theme. Ash delights in blasting a witch across his store’s aisles, swooning the girl in a pitifully non-epic, tepidly cliché kiss that embraces the asinine male ideal Army of Darkness built. It’s too ridiculous to be real, yet if all of Army of Darkness was a figment in Ash’s mind, the ludicrous confidence he shows fits right in. 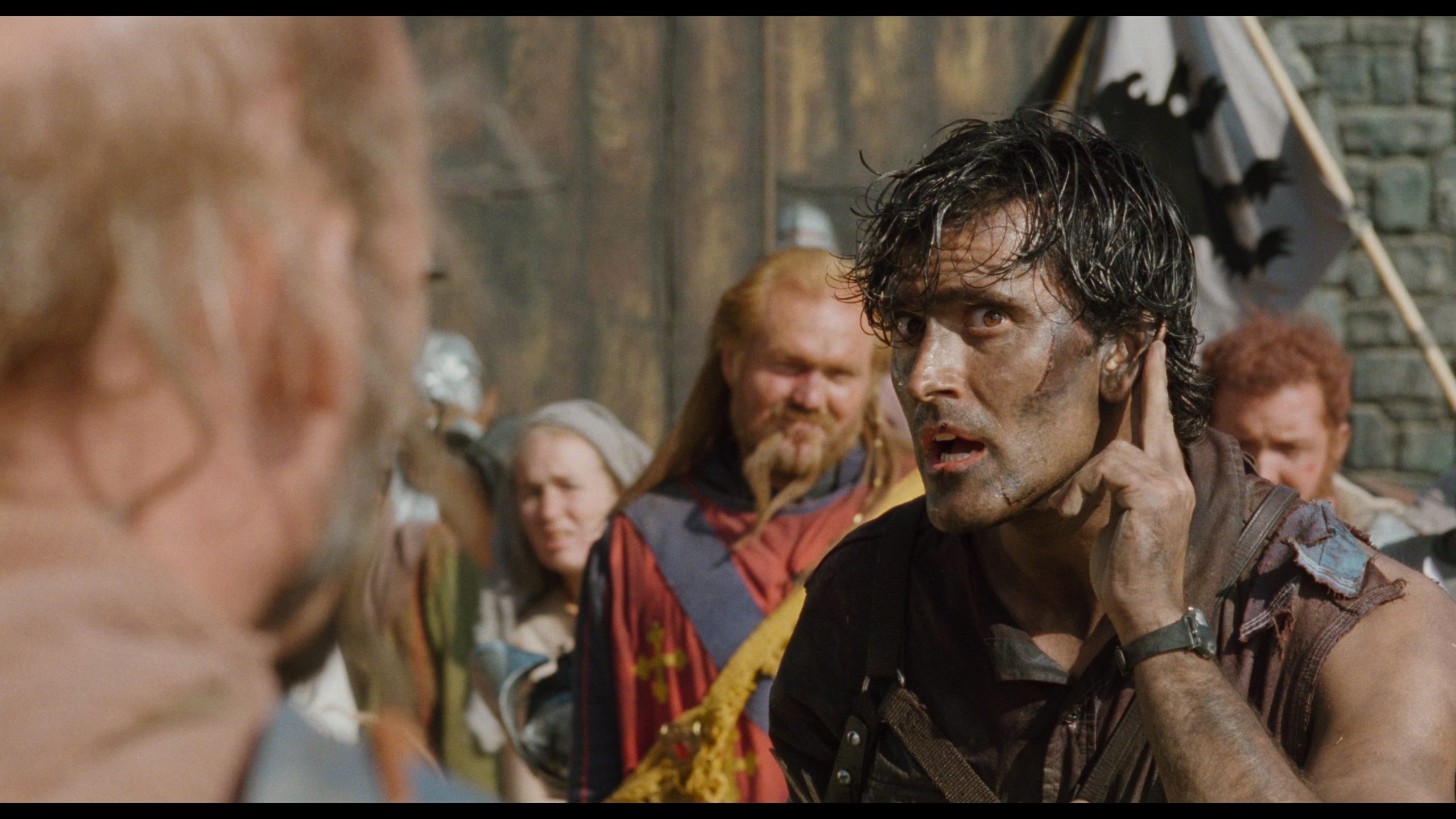 A movie that’s clawing for the most home video re-releases record, Army of Darkness debuts on UHD via Scream Factory and it’s a worthy disc. Only the theatrical cut is included in 4K, thankfully from a gorgeous new master (unlike a number of previous effort from Universal themselves). Rich in resolution and sharpness, Army of Darkness shows wholly modern definition, resolving high-fidelity information regularly. Facial definition pops whether in close or in medium shots.

Precisely replicated grain stays consistent and resolved, even when the image quality organically dips from visual effects or dissolve transitions. Encoding does fine work in maintaining the filmic quality. Whether in the blackness of the pit or reflecting blinding light from armor, it’s all maintained beautifully. Added punch from Dolby Vision makes impressive gains over previous Blu-ray editions.

Color density heightens flesh tones, then enhances primaries further. Henry the Red’s uniform splashes against the yellows waving around him. Blood bursts from the screen with a gloriously vivid red.

Keeping the 5.1 mix of old, this is a fun track, bouncing around the soundstage as needed, whether splashing water, running horses, or skeleton armies. Wind swirls, filling the rear channels alongside the stereos. Boomstick shots reverb outward through the air.

Low-end support could use a boost via an audio refresh. It’s generally dull, even murky when peaked. The best happens during the finale as gunpowder bombs go off, producing a rumble, even if it’s a bland one.

Hysterical masculine fantasy, Army of Darkness is peak horror comedy with as much tribute to geekdom as it is a celebration of action cliches.