Thor’s fun. At least, Marvel made him so, much to the chagrin of the internet’s darker fringes. His masculinity degraded, Love and Thunder pairs him, primarily, with two women, undoubtedly furthering said chagrin.

Joined with others in this latest Marvel phase, Love and Thunder struggles to find its place. Thematic punch comes from the awkward if delightful romance between Thor (Chris Hemsworth) and Jane (Portman). Love saves the galaxy in Love and Thunder’s ultimate message, but it’s also catching religious belief, faith, and philosophy, if in almost mindless ways.

Love and Thunder might be mocking religion. It’s a comedy, so maybe, but not satire though, so maybe not. Gorr’s turn to villainy happens because of the god’s betrayal, and an appearance by a pudgy, skirt-wearing Zeus (Russell Crowe) laughs at the entire idea of all-mighty super beings. Gorr’s efforts to eliminate them all seems inconsequential if they matter so little.

There’s a funny, highly entertaining superhero movie here, in one sense. All of the fighting and lightning make for an enjoyable show in the Marvel form. Anchoring the nonsense, a heartfelt story concerning loss and acceptance to make decisions that matter greater than to one’s self. It’s true hero material, and as a sequel to Ragnarok, fine.

In trying to thread this into the greater story arc, Love and Thunder hardly matters – or so it seems. Tenuous connections to other heroes (Guardians of the Galaxy) amount to cameos, and like the clunky Multiverse of Madness, Love and Thunder feels hopelessly hollow. All of the neon color and tiring digital effects demand the eye’s attention like some kind of kinetic toy store. Saturday morning is where Love and Thunder belongs, aside from the dramatic undertones. 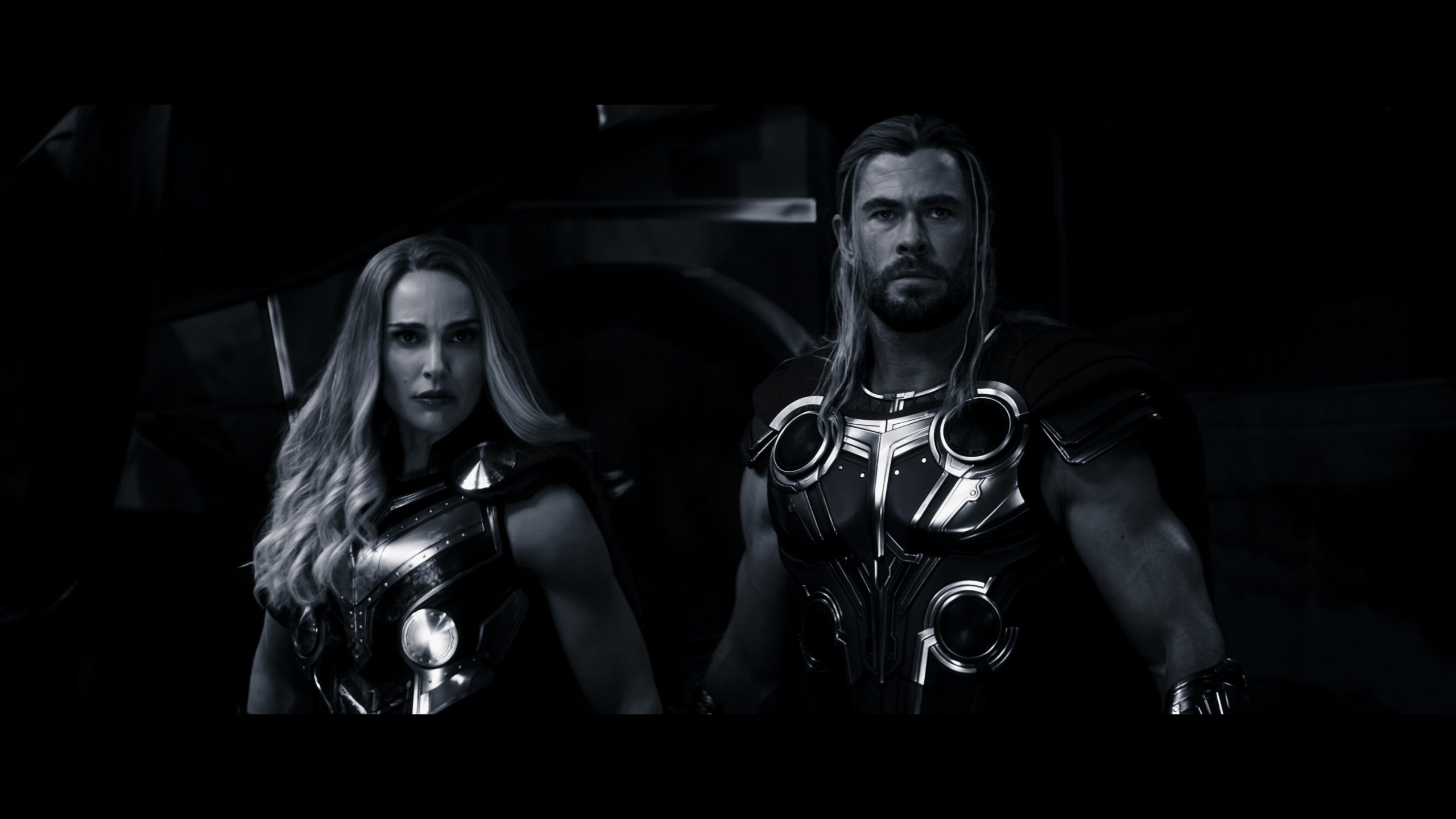 Splendid color saturation gives Love and Thunder a candy-coated palette. Everything looks drenched in primaries, making this an unusually vivid Marvel film; most prefer the subdued aesthetic. Here, alien skin hit a superb blue, and their costumes? Even better. Golden palaces shine with a ludicrous pop.

Although finished at 4K, the visual effects drop sharpness down a bit. Texture remains regardless, but wavers a bit depending on the digital work involved. Facial definition can standout in places when in close, but it’s scene dependent.

Balance keeps everything audible, and the stretch into the surrounds is significant. Mjolnir’s ability to split apart and come back together means those pieces scatter about the soundfield. Aggression runs consistently high, seamless transitions happening in every direction. Overheads play a critical role too.

Disney keeps everything on the Blu-ray. That includes three bland EPK features, a fun gag reel, deleted scenes, and a commentary with Taika Waititi.

Thor returns in another direct comedy, Love and Thunder, but it’s another listless and hollow superhero effort from Marvel.