If, assuming Meaning of Life is accurate, the actual meaning of life sits somewhere between the gloriously tasteless and the truly British. “If” becomes the key word here.

Meaning of Life sits as the weakest of Monty Python’s film endeavors, but still exists as a grandiose celebration of the absurd, the stupid, and the ruling class. The latter gives Meaning of Life thematic weight, between those moments where a fat man relentlessly pukes in a fancy restaurant or a teacher gives lessons on sex by having sex – in the classroom.

Nearly every skit rails on the wealthy, leadership, or authority. It’s consistent, even cruel in dissecting the stupidity in society, delivering on British cynicism like few others. The opening skit destroys capitalistic takeovers, producing a lavishly budgeted attack by the working class on their white collar bosses. Then buffoonish doctors, assisting a birth, made to look intelligent by their superior’s even greater idiocy.

Teachers? Explicit morons. Drill sergeants? Useless order followers. Military captains? Clueless dolts who can’t even figure how someone’s leg was lost overnight. Meaning of Life spares no one in trying to disassemble basic social structures, and when tackling religion, few deliver such accurate, sharp skewers at Christian philosophies and their attitude toward sex.

With an uneven flair, Meaning of Life topples the hierarchy, inconsistently funny, even if the satire holds merit. There’s an utterly bizarre dream sequence – meant to act as such – but goes without clarification and thus falls flat. Others go on too long, wearing the simple gag thin thinking the absurdity carries things. It can, but with limits.

Yet the result is what happens when you give comedians far, far too much money. They’ll use every cent to prop up their work, ballooning the cast with some 60 kids, then multi-era costumes, high-dollar digital effects, equally high-dollar practical effects, and make-up galore. Meaning of Life has a blast throwing away millions on a 10-minute vomit joke, because that in itself pokes at the same corporate lunacy the script does. It’s all connected, and for something so brazen, offensively crass, Meaning of Life can take an intellectual bow. 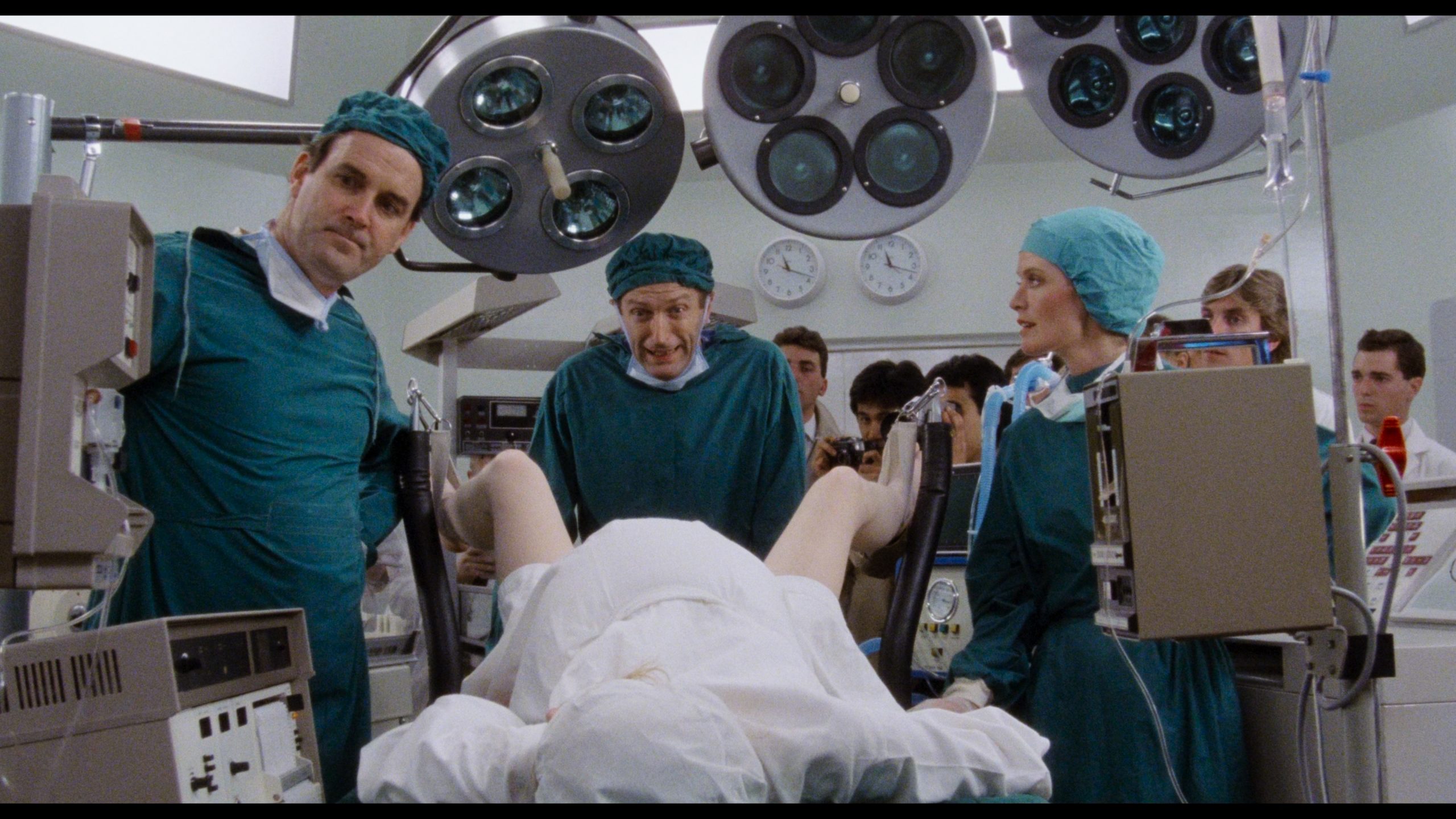 While inherently inconsistent at the source, sharpness wavers all the time and the film stock varies in grain consistency. In the mastering process, Universal doesn’t alter Meaning of Life in any negative way, keeping the material intact. The result is a gorgeous presentation, wholly preserved minus any speck of dust or a scratch. Clarity is remarkable.

Enriched by HDR, the bold contrast shines. Glistening objects break out from the early ’80s film stock. Shadows enjoy a thick richness. Grand color saturation sports a slightly modern tinge, especially notable in the warmer tones, but not to a point of complaint. Flesh tones liven up, and primaries gain in their vividness.

Vibrant and wide, Universal’s DTS:X remix is a delight – partially. First, the directionality follows every bit of action, from the subtle like typewriter keys to bigger moments of action. The extension into the modern surround era seems natural.

Then people speak. Rather than place the audio in the center, it’s pouring from the entire front soundstage. The result is totally unnatural, hollow, and imprecise. How anyone misses something this obvious is a quality control mystery, and it’s a shame since the other audio effects so organically stretch into the additional speakers, overheads included. Slight thumps in the low-end come from explosions and even the score. It’s a marginal range, but something to notice.

Bonuses on the UHD begin with a one-hour 30th anniversary get together. It’s fantastic. With a commentary, a slew of deleted bits last 18-minutes. A four-part making-of, of sorts, is put together with vintage EPKs. A prologue from 2003 features Eric Idle describing the movie for studio execs. Promo materials come in all different forms, and two quick segments on the fish gags follow those. There’s a sing-a-long, a commentary from Terry Jones and Terry Gilliam, and the “soundtrack for the lonely” that plays general ambiance over the movie to make you feel less alone. Genius.

Monty Python's The Meaning of Life