Andy Mitton and Jesse Holland’s Yellowbrickroad is certainly an interesting attempt at creating disturbing thrills and spooky mystery, even as its overcrowded ensemble of indie performers wander off into the deep unknowns of New Hampshire. Led by names such as sister and brother Cassidy and Clark Freeman, it’s a raw and unrefined vision of terror for a millennial generation raised on The Blair Witch Project and TV’s Ghost Hunters. One may label the disjointed movie an atmospheric failure if we aren’t mincing words.

A small group of intrepid explorers seventy years after the fact follow a mountain trail which hides its share of mysteries and lurking evils. Back in 1940, the entire population of Friar, New Hampshire walked down the same trail, never to be seen again. A sole survivor came stumbling back, screaming of madness and death, before eventually going insane. Historical researcher Teddy Barnes has assembled a team of experts to investigate what really happened to Friar’s missing citizens all those years ago.

Yellowbrickroad mines backwoods horror tropes aplenty, though it’s clever enough to throw in a few unforeseen twists. There’s really not much in the way of plot beyond the hapless crew stumbling around the outdoors of New Hampshire and whether they’ll make it back alive. The movie isn’t necessarily slow or methodical but one wonders if a smaller ensemble would have made for a tighter screenplay.

Co-directors and co-writers Andy Mitton and Jesse Holland give the actors wide space in their performances, allowing an inexperienced cast room to create whatever scares they can wring from the rather conventional premise. Sometimes it works, sometimes it doesn’t.

Visceral blood and gore are definitely on the menu but they aren’t Yellowbrickroad’s primary purpose. The suspense and terror are as much psychological in nature as anything. What if the crew from Ghost Hunters went crazy while investigating a supernatural mystery?

Yellowbrickroad isn’t a complete waste. There’s a lot to enjoy even if its execution occasionally falls flat. The cast is hit or miss; by the end you’ll wish Cassidy Freeman had more screen time. It’s a creative indie on a shoestring budget, largely standing above the wasteland of dreck I regularly receive from horror distributors.

Though he doesn’t show up on screen, filmmaker Robert Eggers (The Witch) cut his teeth on Yellowbrickroad as a production assistant. Everyone has to start somewhere… 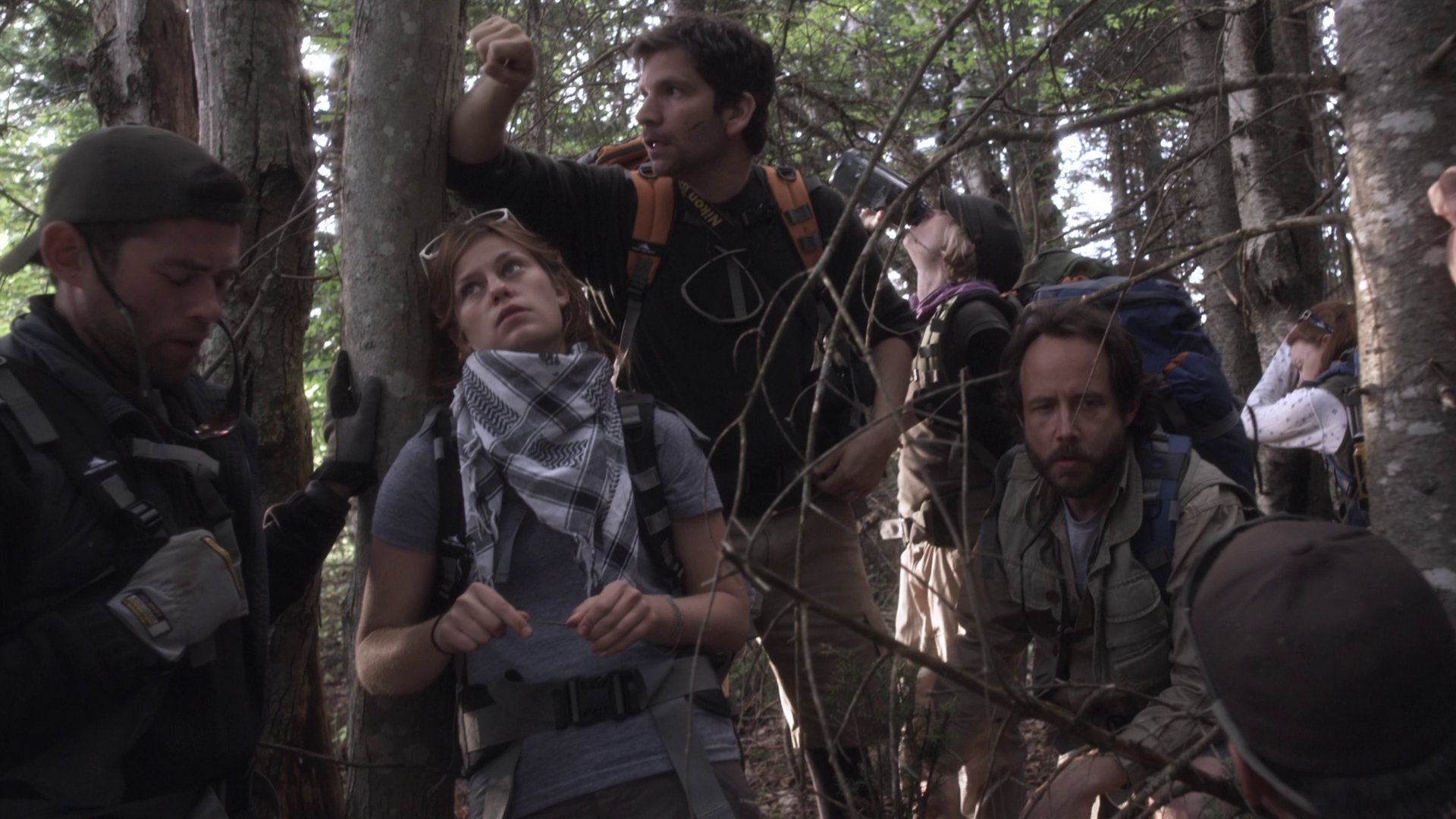 Yellowbrickroad has been remastered in 2K with enhanced special effects, mostly in the final act, for this new Blu-ray edition from Lightyear Entertainment. The film itself is a 2010 production, shot with the RED One camera and finished as a 2K digital intermediate for mastering purposes.

The 1.78:1 presentation produces fine but unremarkable video quality. The 1080p video reflects an outdoor film shoot with minor limitations. There’s crushing in darker scenes but otherwise its clarity is fairly high. Sharp thanks to a quality digital filmmaking chain but unimpressive in most other picture quality attributes.

The 5.1 DTS-HD MA soundtrack offers a shrill, dense, and even chaotic mix. The sound designers went to town creating an annoying sonic landscape. There’s a lot of ambient activity in the rears and across the entire soundstage, especially as the group wanders ever deeper into New Hampshire’s lost trail. Some haunting music adds to the eerie atmosphere across the room.

Dynamics are perfectly fine but dialogue is occasionally muffled. I’m not sure if that was intended, reproducing reality television for the purposes of simulating found footage, or merely a mistake. The bottom end is sufficient for found footage horror fare.

No subtitles are included. A secondary 2.0 PCM stereo soundtrack is available.

Yellowbrickroad made it out on DVD from Vivendi Visual with a commentary from the co-directors; Lightyear Entertainment finally issues the movie on Blu-ray with updated special effects and several new special features made exclusively for this disc.

The disc is coded for all regions and arrives in a clear case.

Walking the YellowBrickRoad (17:09 in SD) – A new behind-the-scenes featurette with extensive footage from the set.

Practical Blood FX on an Indie Budget (11:07 in SD) – A new featurette featuring two members of the film’s effects crew.

Cassidy & Clark Freeman Interview (36:52 in HD) – A Zoom meet-up between the two siblings, who were both actors and executive producers on the movie.

Eric Hungerford Interview (15:43 in HD) – The producer shares his memories of the movie and working on it.