The first time they’re seen in bed, the Freeling parents smoke a joint as Steve (Craig T. Nelson) reads a book about Ronald Reagan, apparently clueless as to the Reagan administration’s drug war. But Steve loves this situation – he’s in a successful real estate career, and business is expanding. Thanks Reagan.

Poltergeist laments these changes to suburban middle class life though. Despite living in a physically close community, Steve feuds with his neighbor over their TV remotes. When spirits begin attacking, wife Diane (JoBeth Williams) can’t find anyone to help her kids; the adage, “it takes a village” no longer applies as everyone deals with their own, and any failure is seen as a personal flaw. Poltergeist enjoys relentlessly isolating this family in what was, once, the ideal American life.

There’s excitement early when Diane celebrates furniture moving itself. An edit between her kitchen and a newly built home’s kitchen dissolves into the same layout – this corporate build and expansion eliminated personality, style, and design. No wonder self-propellant chairs earn cheers in such a mundane life, where the bland sameness came to define the housing market.

It’s such a comfortable setting for ghostly horror. The familiarity is key. Kids sleep under Star Wars bed sheets. An ungainly tree resides outside the bedroom window, perfect for inducing childhood nightmares. During the day, kids ride their bike down the freshly laid streets, and inside, dads gather to escape into football games. Written and produced by Steven Spielberg, Poltergeist is indistinguishable from E.T., as if the latter happened only a block away.

Then come the ghosts, brought into the world via television, ensnaring kids in its grasp. In that is a satirical lament about changing parental standards and how the screen became the babysitter. More so though, Poltergeist slams suburbia’s rapid, unchecked explosion. The land developer brushes off building over a cemetery because it’s, “just people.” There’s no decency, just profit. Steve appreciates the cash, but when he realizes the cost and how crass the development process is, his worldview changes. Seeing lights go off and on by themselves, threading ropes through the spirit dimension, and engaging with ghost catchers will do that to anyone. 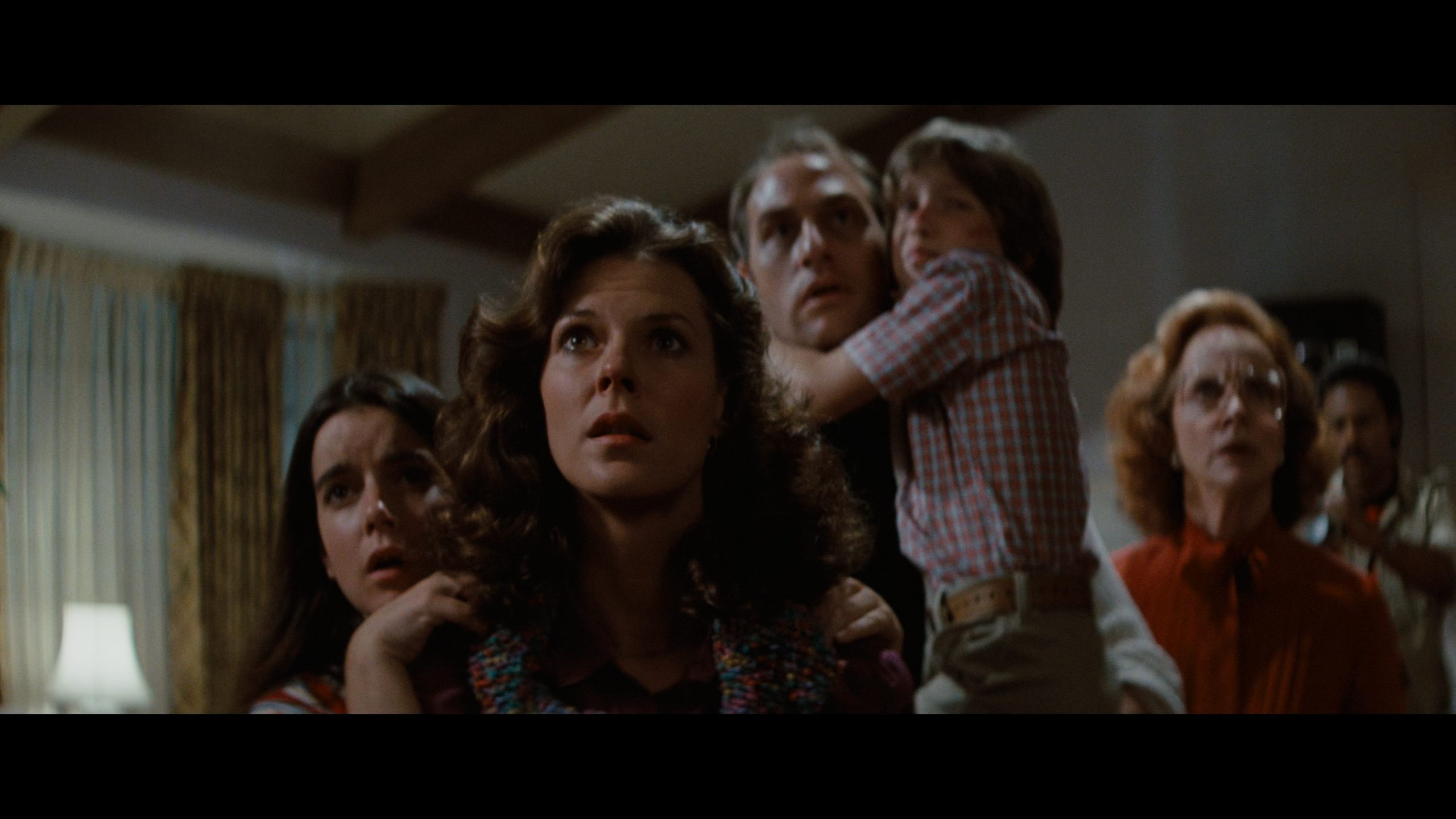 Presented with a generous new master, Poltergeist shows exemplary detail, and the sharpness impresses just as well. A perfect, spotless print doesn’t show a scratch so every frame is pristine. Texture galore pops from the widescreen print, facial definition striking in close, with long shots revealing every bit of ’80s era set decor.

A striking, bolder contrast gives the ghosts pop, whether it’s just the TV static or the manifestations. Even house lights glow exceptionally well. The blooming closet might be the brightest thing yet on this format. This is all backed by vivid black levels, perfectly resolved, keeping the detail intact as they sink into perfect black.

Remastered DTS-HD reveals some audible age in the dialog and sound effects. Nothing severe, rather organically faded over the decades, slightly wearing down the dialog.

This doesn’t change the convincing channel separation. Thunder hits in stereos and rears precisely enough to sound as if outside. Rain splashes through the soundstage. Little creaks and groans in the house pop up in the positional speakers regularly. A decent low-end thrust brings range to the mix, a little puffy, if solid. Note Warner includes the original audio mix as well.

Residing on the Blu-ray only, a two-part look at “real” poltergeists runs a half hour total, and a vintage making-of lasts just seven minutes.