Dona Flor and her Two Husbands was a box office sensation in its native Brazil, earning a Golden Globe nomination for Best Foreign Film. The earthy and sensual comedy from director Bruno Barreto adapts the novel by Jorge Amado. Set in the 1940s, it captures a woman trapped between two very different husbands and her conflicting desires. The central role by actress Sonia Braga made her an international film star in the 1970s.

Dona Flor’s first husband is the carousing Vadinho (José Wilker), an unrepentant gambler and womanizer who is a passionate lover. He comes in at all hours of the night during their marriage and gambles away what little money they make. She’s left a widow after Vadinho suddenly dies from his irresponsible ways. The first half of the movie details their fiery relationship and the toll it takes on Dona Flor.

Still a fairly young woman, Dona Flor’s second husband is the complete opposite of Vadinho. Teodoro (Mauro Mendonça) is a boring pharmacist with a stable job. He’s a stand-up citizen mostly interested in running his business and local politics. She finds him wanting in the bedroom, remembering her torrid lovemaking with Vadinho.

Despite living now in the lap of luxury with Teodoro, Dona Flor begins yearning for her days with Vadinho. The final act veers into surreal funny material as Dona Flor ignites a sexual relationship with… Vadinho’s naked ghost.

Dona Flor and Her Two Husbands is a risque commentary on the marital pressures faced by women in Brazil and their changing roles, fusing the religious traditions inherent in Brazil. Star Sonia Braga injects a sensual presence as Dona Flor transforms from an inhibited wife held back by her husbands, ultimately unleashing a much happier woman in complete control.

This is a dynamic portrayal which paints a realistic portrait of Dona Flor’s conflicting desires in marriage and the limited options she has as wife. It’s the classic trading passion for security in a marriage of convenience.

There’s an undeniably broad appeal in the comedy for both sexes while never hitting you over the head with its underlying gender politics. I’m not sure what it says about Brazil that Dona Flor and Her Two Husbands remained its all-time box office champ until well into the 2000s. 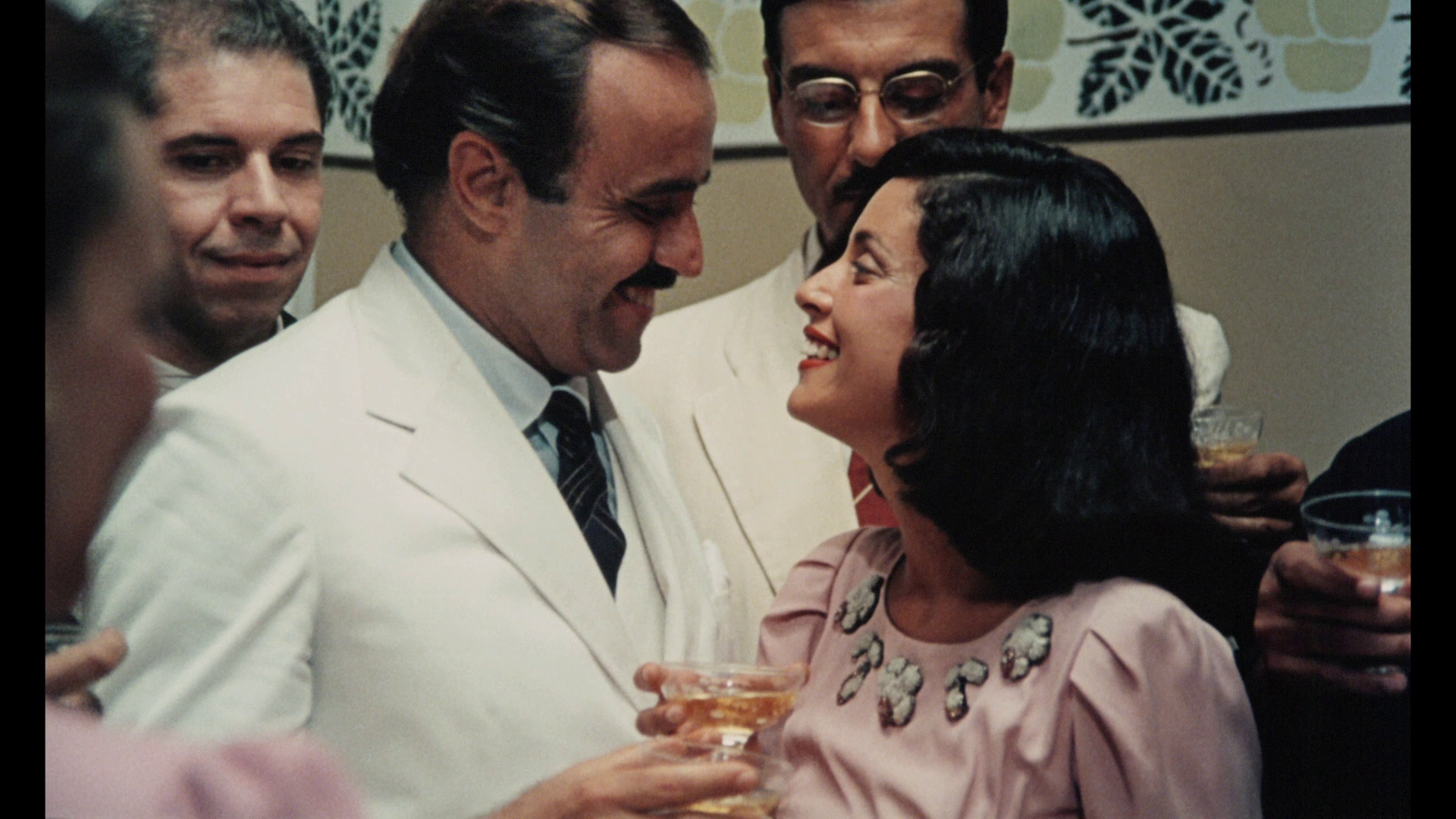 Dona Flor and Her Two Husbands finally hits Blu-ray in underwhelming video quality. This isn’t a sparkling scan from a pristine negative. Film Movement’s original press release indicated a new 4K restoration, though other sources merely claimed a HD makeover for Dona Flor and Her Two Husbands. What goes unmentioned is which film elements were used, always a bad sign they exist in less than exemplary shape. The 1.66:1 presentation offers middling definition for a new transfer with issues, almost certainly struck from inferior elements.

Cigarette burns are visible on the reel changes and recurring scratches pop up during scenes. Crushing and washed-out color saturation produce an uneven 1080p experience. There’s simply a lot of inconsistent and fluctuating picture quality, possibly the best for the Brazilian production we’ll get short of a massive film restoration. Film Movement has done much better work in the past finding stronger elements for the obscure cinema they often release.

The main feature runs 117 minutes on a BD-50, perfectly encoded in AVC. Grain reproduction is film-like, if gritty. Texture looks primarily unfiltered, a scan done with no deleterious processing. Fine detail is often soft and hazy, a result of decidedly conventional cinematography from the period.

The discrete surround mix opens up the environmental cues, expanding the soundstage beyond the tight stereo presentation. While lacking the expansive and constant surround design of newer films, there’s a well-placed sense of space and directonality. Dialogue reproduction is coherent and balanced with the backing score.

Dona Flor and Her Two Husbands makes its worldwide Blu-ray debut courtesy of Film Movement, which hasn’t been released yet in its native Brazil. The disc is coded for all regions.

The disc arrives in a clear BD case with a 16-page collectible booklet featuring a new essay on the movie by producer and costume designer Mary Jane Marcasiano.

Audio Commentary by director Bruno Barreto – This new commentary is a spirited effort and offers up deep insight into the production’s planning.

Behind The Scenes Featurette (07:51 in SD with English subtitles) – A vintage featurette which utilizes raw footage while the movie was being filmed.

Full disclosure: This Blu-ray was provided by the label for review. This has not impacted the editorial process. For information on how we handle all review material, please visit our about us page.

Dona Flor and Her Two Husbands

An off-beat and occasionally insightful sensual comedy from Brazil that made actress Sonia Braga an international star in the 1970s.