Platoon fills its time with plentiful nothing. Troops scrounge through weeds looking for mines. They sit in fox holes, waiting for a possible enemy attack. Oppressive heat shows on the soldier’s faces, or rain drenches them unrelentingly. It’s miserable, and that’s everything Platoon should be.

Oliver Stone wrote Platoon from his own experiences as a rookie, dropped into war, and expected to kill mercilessly. His avatar is Chris (Charlie Sheen) whose idealism shatters immediately. Most of those called to fight lack education, and fight less for duty or country than a paycheck. Some even enjoy the chance to slaughter anyone branded an enemy. The politics bringing them to Vietnam mean nothing personally.

Hollywood lit up with post-Vietnam action movies in the ‘80s, spawning a sub-genre geared toward “winning” this war, thematically anyway. Chris, during one conversation, smirks in disbelief that America could lose a war. Then came Platoon, sinking in the hatred and indifferent cruelty, delivering on a worldview that decimated propaganda.

At times unnerving, even haunting, Platoon rarely spares details, and when it does, there’s purpose. After crushing a disabled Vietnamese man’s skull, the American soldier looks on with glee, the camera focused on eyes eerily joyous about the gore and death. In-fighting erupts between the division, one side standing for rational emotional thought, the other too scarred by their time to ever see their opposition as human.

Delivered through mournful monologues, Chris’ mental state erodes in time. Platoon makes certain to see his collapse as much as hear it. Stone’s script ensures the message isn’t lost in the action-movie bloodshed. Chris survives his time in Vietnam, but as he stares blankly from an airlift door, he’s no longer the same person. He’s killed and seen other kill. The imagery doesn’t spare an audience.

In its final act, Platoon exists under flares and napalm, the only things breaking the night’s unforgiving shadow. The chaos doesn’t cease, Platoon erupting in a full wartime view, yet Platoon’s striking, lasting moment comes during Chris’ realization earlier of political exploitation. He’s there as a volunteer, and fortunate to be in that position. The others clean latrines because they have to, then risk their lives not for country, but for themselves alone. It’s a broken circumstance, and Chris realizes as much only when too late. 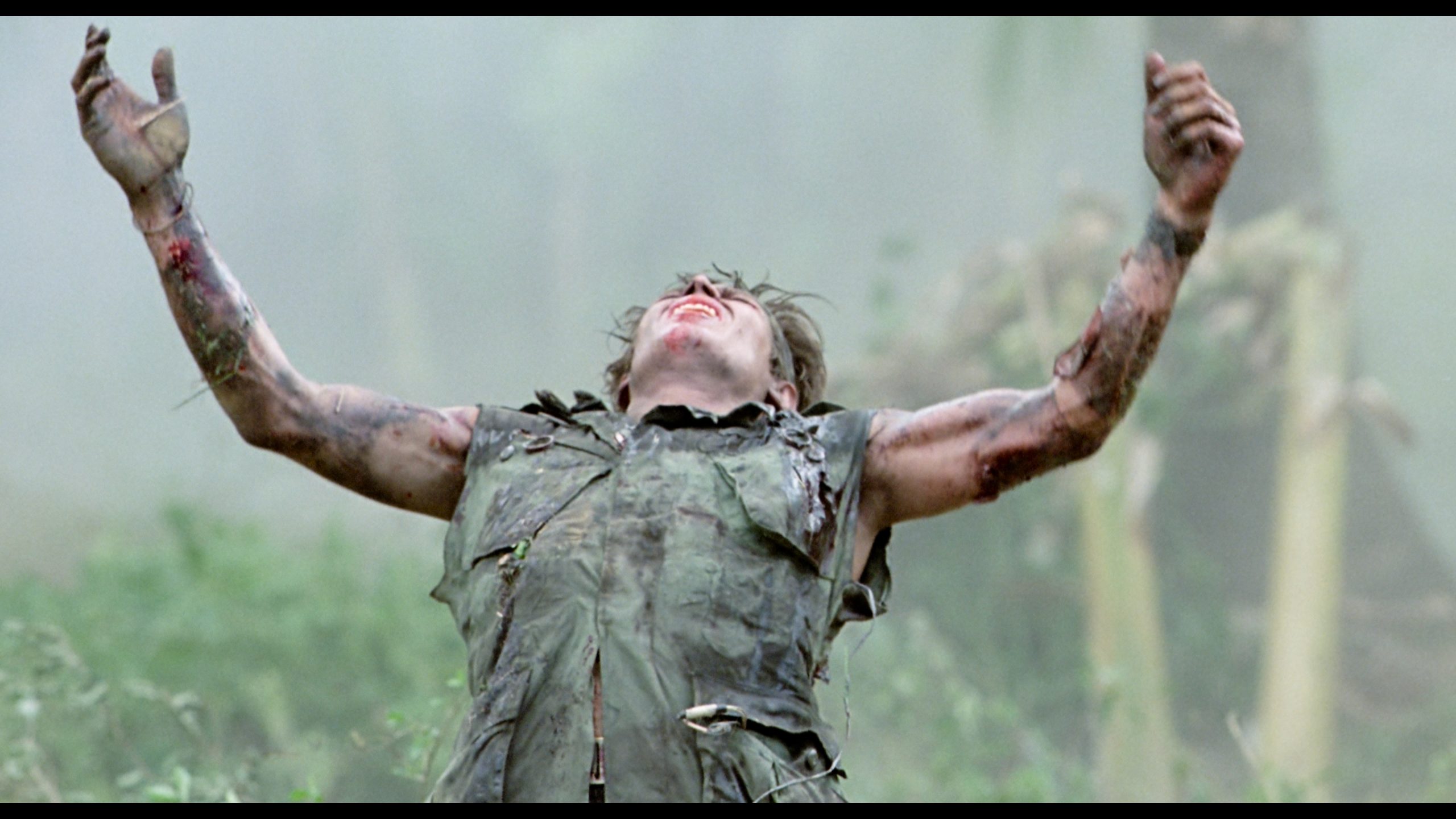 This is terrible. Awful. Ridiculous. While Shout’s issued a number of high-grade 4K masters (including another Vietnam clsssic, The Deer Hunter), Platoon is an inexcusable mess. Using an outdated master from MGM, a true 4K scan this is not. Possibly, it’s HD only. Resolution lags, leaving everything soft and murky. Noise reduction keeps a waxy appearance intact on all surfaces. Detailed? Not in the slightest.

Some grain remains, mostly in darker areas. However, black crush sucks most of that away. The rest looks wholly digital, as if Platoon were scrubbed then layered digitally with artificial grain.

The Dolby Vision pass helps a little. Not much, but it’s something. Sun blazes over the imagery, contrast lifted and bold. While this doesn’t help the shadows, Platoon shows some benefit on the format. Earth tones dominate, mostly greens, barely expanded over the Blu-ray.

Clear fidelity ages Platoon little. Dialog sounds excellent in clarity. The only miss is the range, stuck in the middle, wholly flat, minus any drop into the LFE when action turns heavy.

Two commentaries on the UHD. One is with Oliver Stone, the second with military advisor Dale Dye. Other bonuses reside on the Blu-ray. Beginning with a short 20-minute documentary about the war’s 1967-’68 period. A 12-minute featurette on the location shoot is followed by a 17-minute retrospective. For 25-minutes, veterans speak on their experiences and the film itself. Training for the roles comes next for six-minutes. Deleted/extended scenes run 11-minutes, and feature an optional commentary with Stone. Some extra interview snippets finish the disc off.