Vampire’s Kiss is an eccentric and adventurous film from early in Nicolas Cage’s acting career which never knows exactly what it wants. He’s the star in an off-beat film which cannot be categorized as horror, comedy, or drama. Parts of all three are clumsily brought into play. The cult film from the late ‘80s is the product of a young director in Robert Bierman and a young Cage taking outrageous creative risks that simply don’t work out in the end.

The cast includes a young Maria Conchita Alonso, Elizabeth Ashley, and a seductive Jennifer Beals vamping it up. Outside of Beals (Flashdance) slinking around as a sexy vixen in a small but potent role, Vampire’s Kiss is a disappointment. Less than the sum of its parts, a slightly clever premise becomes lost in a morass of questionable story choices. It’s a darkly comedic allegory on working for tyrannical bosses and the dangers of urban dating, hidden under a horror wrapper.

Peter Loew (Cage) is a stressed-out and often sadistic literary agent when he meets the mysterious Rachel (Jennifer Beals). One biting night of passion later, Peter starts believing she’s a vampire who has turned him into an immortal bloodsucker like herself. Shades of Patrick Bateman creep into Peter’s increasingly unhealthy perspective as he falls under Rachel’s seductive spell. Peter terrorizing a poor secretary (Maria Conchita Alonso) at work foreshadows his dark and demented descent into insanity.

Nicolas Cage has never been afraid of taking stylish risks in his performances but this is easily one of his career lowlights. It’s hard imagining how a studio signed off on Cage’s bizarre and almost deranged approach, adopting mannerisms borrowed from Nosferatu and a phony posh accent he never once used again. Frequently the effort gets laughably bad, allowing for unintentionally campy comedy.

One of his first leading roles, Nicolas Cage simply bit off more than he could chew at a time he was still learning his craft. A better director would have reined in the off-kilter performance which throws everything at the wall, hoping to see what sticks.

Vampire’s Kiss was a complete flop and would have most likely ended the career of other leading men. Luckily for Nic Cage, being Francis Ford Coppola’s nephew likely salvaged his Hollywood career. It’s amazing how a few years later after this disaster he’d win an Academy Award for Best Actor.

Cage has done many enjoyable movies over the years in a variety of roles. One of my favorite Hollywood stars, Vampire’s Kiss is an early mistake best forgotten for Cage in a successful career of creative risks. 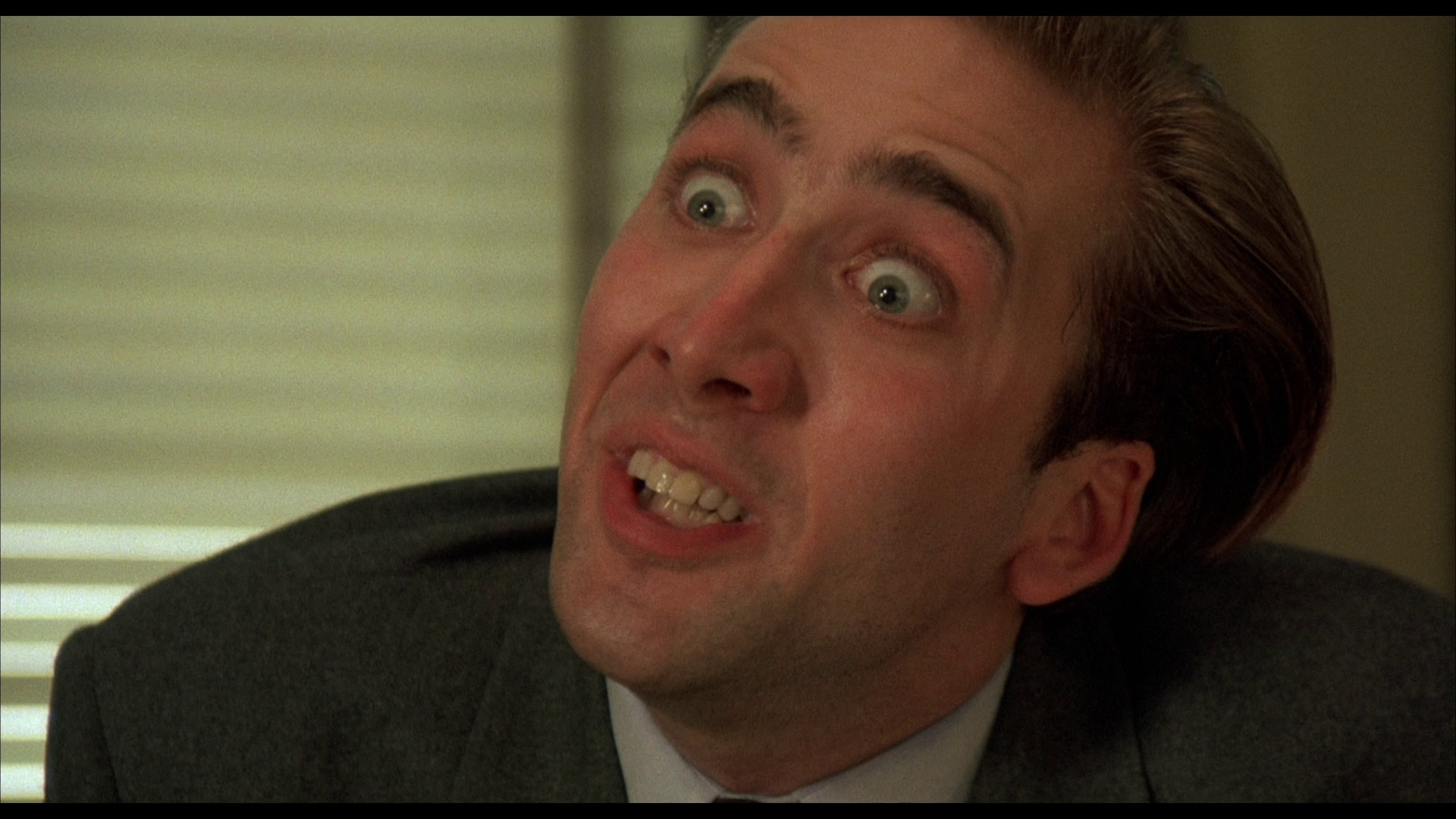 Vampire’s Kiss makes it out on Blu-ray from MVD, licensing the transfer from MGM. The cult flick made it out once before on Blu-ray from Shout Factory as part of a double-feature. Without having seen the earlier and now out-of-print disc, I don’t believe there is much difference in A/V results. They are likely both produced from the same basic film scan.

What we have here is a modest 1.85:1 presentation from a functional film transfer with inconsistent results. The definition is serviceable with no evident processing. The elements are largely unrestored with no egregious signs of deterioration. Black levels and shadow delineation are decent, if grainy in spots.

It’s an older scan made with a smidgen of ringing and solid clarity. Film-like, unfiltered texture isn’t spectacular but most close-ups exhibit sharper fine details. Color reproduction is often the best feature of the uneven 1080p video.

The main feature runs an uncut 103 minutes on a BD-25. The AVC encode nicely reproduces the grain structure and texture. If this movie was more popular, I could see a new 4K film scan and Dolby Vision encode really helping the depth and delineation over this unremarkable presentation.

2.0 Stereo PCM offers extended dynamic range, which benefits Colin Towns’ score at the expense of some muffled dialogue. The channel separation is fairly strong for stereo and the sound design is well-suited for a Hollywood b-movie. Effects are crisply rendered and there’s a decent sense of presence.

Vampire’s Kiss is #39 in MVD’s Rewind Collection. It comes in a retro VHS slipcover with reversible cover art and a mini-poster. The disc is coded for Region A. There are no new special features included; these have been seen before.

Audio Commentary – Director Robert Bierman and Nicolas Cage give this 2002 commentary recorded for the DVD release. A somewhat honest take on the flop, though Cage defends some of his bizarre acting choices. Definitely worth a listen if you enjoy Cage’s acting.

Nicolas Cage probably hopes you forget his terrible performance in this pseudo-vampire flick from early in his career.