Where the Rain Can’t Bother Us

Shop owner Joe Horn (Guy Kibbee) laments his island is soon to be transformed by Christian missionaries. “The last remnants of an earthly paradise,” he says before boats bring the conservative travelers. In 1932, those searing, critical words held their basis in prohibition, which began via America’s Protestants. That’s not all Rain will take to task.

It’s nigh unthinkable Rain released as-is in 1932, so outwardly furious with religious hypocrisy and what the characters refer to as “tyranny.” Puritanism in post-WWI America defined Hollywood’s standards; Rain plays like a deliberate shock campaign against those demanding their beliefs become law.

Rain doesn’t relent, retreat, or even soften its position

Rain doesn’t hide its intentions. Missionary Alfred Davidson (Walter Huston) is typically lit from below, his eyes sinking into his skull. He’s a looming presence, tall, and more often than not, purposefully looking down on Sadie (Joan Crawford) for her sexual misdeeds. Or, as Mrs. Davidson (Beluah Bondi) puts it, “a woman of that sort.”

Sadie’s profession draws immediate ire – and she’s the hero. There’s empathy for her, but none for the practicing Christians. Rain doesn’t relent, retreat, or even soften its position. Often static, play-like staging keeps the story contained, playing out a wider cultural battle with but a few people. If there’s a fault, that lies in the obviousness, and near cartoon-esque caricatures that create Rain’s villains. There’s an extreme Christian right, and the Davidson’s exist against the farthest edges of that faction. And, the title refers to the metaphorical storm clouds that lift only when these people leave.

Mrs. Davidson detests dancing and music on Sunday. She gives a theatrical speech about disrespect. Alfred does more so, pleading his case up the local political chain to have Sadie removed from the island. At all times in this conflict, Sadie’s sorrowful, worried eyes weigh on the audience, a distance from her chipper introduction when she flirted with the men over shots. Her opposition offers only admonishment and punishment, not help.

In nearly 100 years since Rain, the arguments against legalized prostitution remain, still based primarily on religious doctrine. The irritation Rain commits to showing isn’t inherently sexual so much as the fear-inducing control pushed on those under Davidson’s ire. It’s the soldiers and Joe Horn too, forced to contend with these furious folk; Sadie makes for a striking feminist statement though in this modern era as body autonomy rises to a prominent social issue. And again, it’s that edge and that fringe who command everyone to follow their belief systems. Rain’s locked down, small scale story still finds worth in a vastly changed social climate. 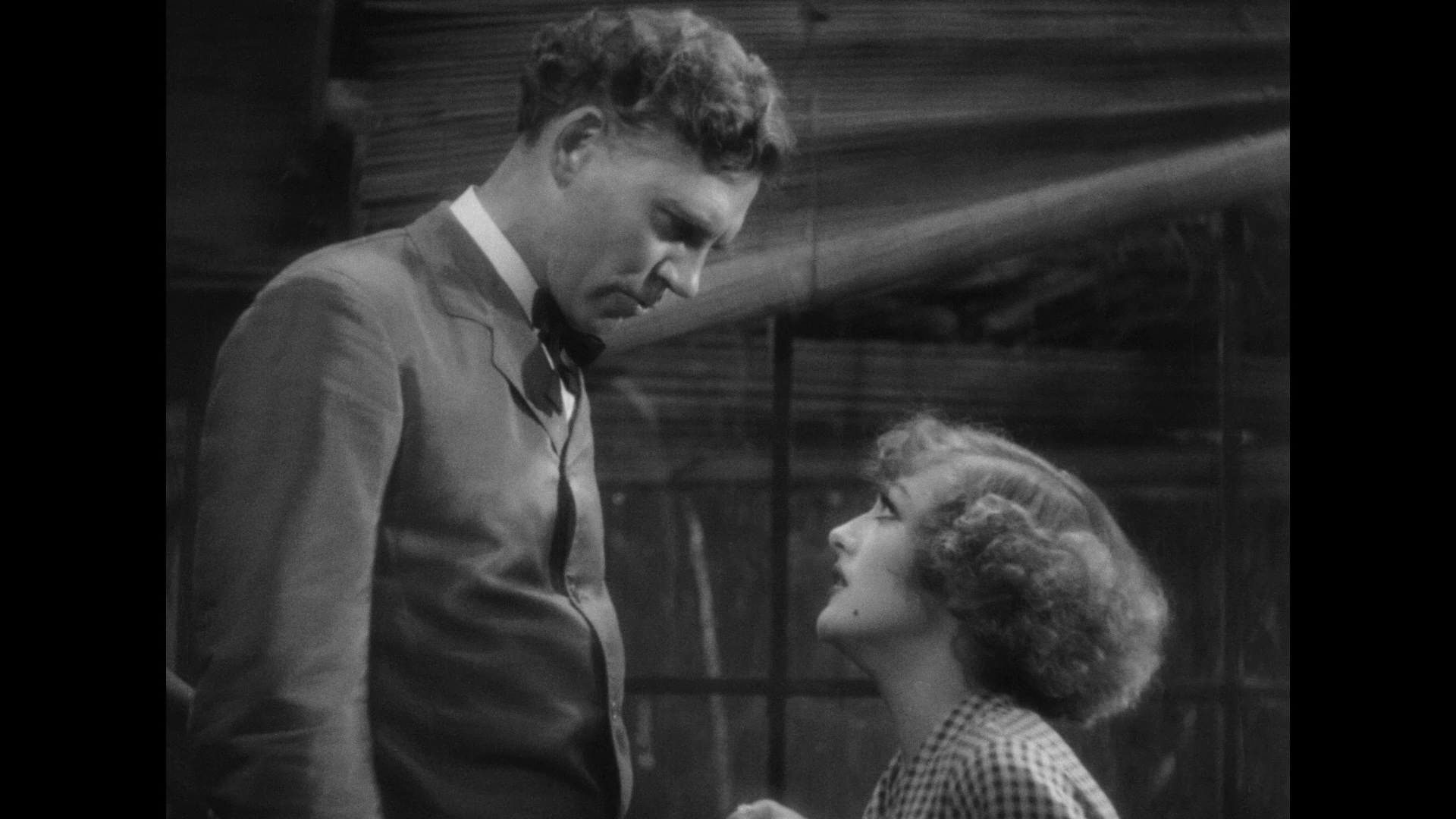 A sublime restoration brings Rain glistening into the modern era. It’s a crisp, high resolution scan, benefiting the film via the precise (and flawlessly resolved) grain structure. Minimized damage appears in batches, but limited, doubly so considering the age. Slight flicker and a wobble on occasion hardly impede the quality.

If there’s a consistent complaint, the gray scale doesn’t breathe, often murky and without full range. Contrast fares better than shadows, but both are restrained.

Dolby Digital will have to suffice. Mono handles itself well enough, foggy dialog and straining score included. It’s typical for the time period, and like the video, restored beautifully to preserve what’s available.

Two commentaries, the first with writer/historian Mick LaSalle, the second with historian Richard Barrios. There’s also a newsreel/cartoon for the proper setting, a thick image gallery, and physical booklet inside the case. Plus, VCI includes an unrestored version of the shorter, edited cut.

Relentless in its teardown of Christian political influence, Rain’s deliberate staging dilutes the themes, but for 1932, mounts a furious progressive ideology.