In a movie with children piloting submarines, genetically modified killer mosquitoes, and albino super villains, Barb and Star finds the most authentic middle age woman’s relationship ever put on film. The rest of Barb and Star’s wholesomely ludicrous humor is just set dressing for the leads.

To be succinct, Barb and Star is like a best friend’s sleepover that doesn’t end. Lifelong pals, Barb (Annie Mumolo) and Star (Kristen Wiig) could pass as twins as their connection is so pure, so right, so obnoxiously darling, they carry this movie even as the comic book-like aspects intrude on their vacationing lives.

While funny, it’s almost a shame Barb and Star doesn’t hold back on the immensely (and purposefully) stupid story. There’s enough enjoyment watching these woman just be, endlessly chattering and celebrating the freely stupid things they do. Insert a man between them, and the script finds its heart.

Barb and Star is nothing less than saccharine-coated joy, so much so that even its danger – comedy-infused or not – comes through as playfully cheery. Everything is about fun, color, and understanding friendship to its absolute core.

Yes, this movie with knock-off Morgan Freeman talking crabs, mermaids, sea turtles, musical numbers, and murder bugs contains a relationship so rich, the draw isn’t necessarily the humor, but the sheer joy these two women bring to one another. They’re just so damned happy, so ridiculously locked into one another, no matter the asinine twists, they’ll always come away smiling.

Rather than a mid-life crisis, the trigger for Barb and Star is to elevate their lives beyond their small town. They don’t suffer an emotional lull so much as a need to further expand their worldview – and together. Always. The entire movie follows their mood, flushed with gorgeous color and lush beaches, it’s all seen through their eyes. Entering a hotel, they’re overwhelmed, witnessing a song-and-dance routine that isn’t real to anyone other than them. Barb and Star works like a mind trip, but not for the audience. Rather, as a means to grasp the potency of such powerful friendship. It’s human comedy, but at a level only the likes of these characters can see. And they see a lot. 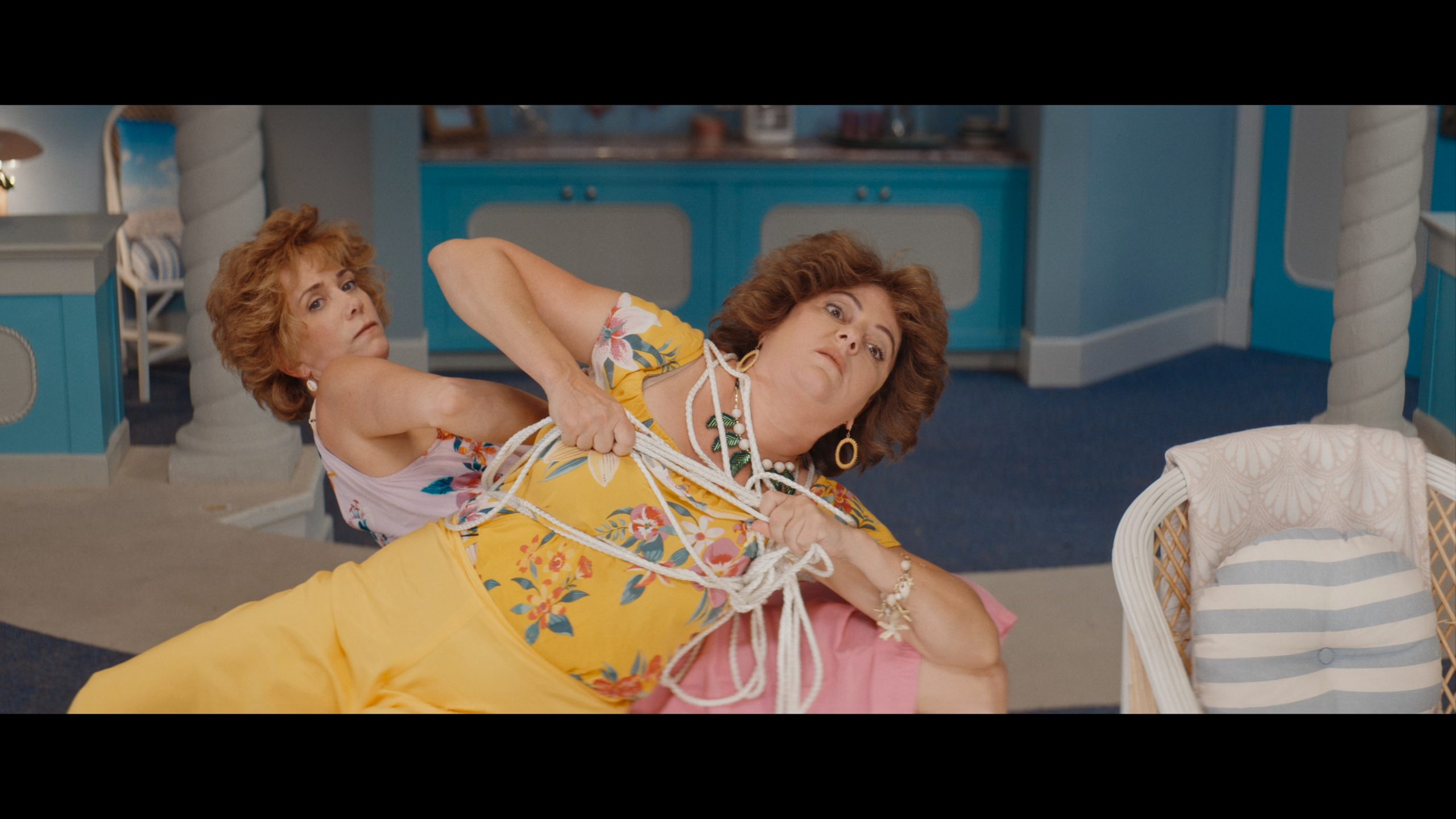 Hefty brightness gives the visuals a firm glow. Contrast sticks out, popping every light source against thick black levels that just avoid crush at their deepest points. Depth gains alone make this 4K a notable upgrade from the Blu-ray.

A surprisingly unexpected amount of low-end support greets Barb and Star as explosions erupt and the score drives into the subwoofer. Club music blows up the LFE. This is the same mix as the Blu-ray (DTS-HD), and that’s okay since it’s a pleasing track.

Channel separation doesn’t impress often. One song splits the stereos in a fun way. Otherwise, the score fills the rears more than anything else.

Lionsgate includes a commentary with director Josh Greenbaum and his two stars. Two featurettes, deleted scenes, a blooper reel, and a short in-character fashion show round this one out.

Utterly ridiculous but embracing the absurd, Barb and Star somehow finds a loving tale of friendship between super villainy and sex.