If the idea were to create the Buzz Lightyear film Toy Story’s Andy saw back in 1995, it’s a wonder why Lightyear looks so technologically luxurious.

It’s dangerously cliché to mock the current Pixar as the company that used to be cool and inventive before they got rich. That isn’t even inherently correct given the studio’s funding and multiple successes in recent years, but Lightyear pulls Pixar toward their Cars 2 days.

Pixar pushes animation toward photo realism; it’s their style. Lightyear represents an impressive high point in making Buzz and his crew look as if they belong on a genuine alien planet. Yet, it’s hard to believe no one considered toning down the lighting and texture to make a nostalgic, more honest throwback. Pixar’s creative output – at least, when it peaked previously – seemed to demand challenging restrictions.

Instead, Lightyear just is, meandering through a sci-fi world designed for toys, and losing the emotional lure after the first act. Buzz, traveling through hyperspace on a mission to return stranded scientists home, doesn’t age. His friends do. Pixar’s writers and animators smartly distill these ideas and longing into a digestible script, then dump it all for themes of teamwork, as generic a theme as any piece of Hollywood animation.

Credit where it’s due: Lightyear’s final act does bring a twist, forcing Buzz (Chris Evans) to face his future self in a Christmas Carol-esque turn. That’s clever, and for Lightyear a brief moment of unexpected storytelling in a movie overstuffed with the expected.

Lightyear, as conceived, offers a plainly commercial idea to continue the Toy Story universe away from the pressures that series brings. Like Planes did with Cars though, Lightyear seems better off under the Disney banner directly, rather than wasting Pixar resources on such a minimal, listless adventure, devoid of heart or innovative ideas. 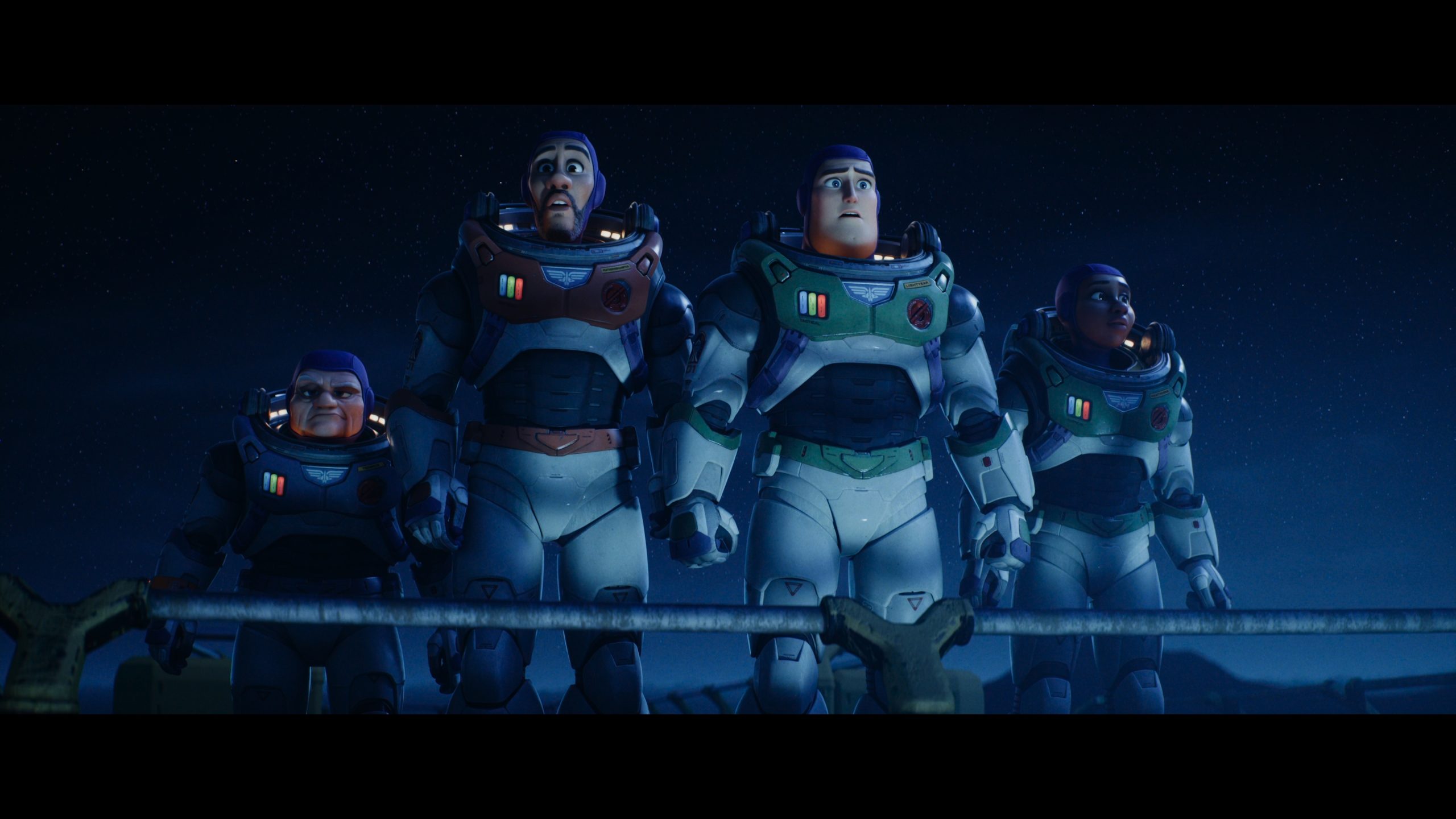 Absolutely splendid, detailed animation is meant for this format. The sharpness is impeccable, and resolution stands out immediately. Texture shows everywhere. Space suits carry not only fabric details, but also dirt and dust where possible (and it’s often possible).

Color follows suit, rich, full, and vivid. Primaries hold nothing back. Red warning lights, usually a problem for encodes, miss nothing. This entire presentation doesn’t waste anything, even as the palette represents something more modern. A slight grain filter doesn’t lead to issues.

That consistent action whips through the soundstage, tracking ships as they pass. Mixing favors natural transitions, not always obvious, yet so smoothly done, they situate perfectly in the positional channels. This includes the heights, which push enough sound to be a part of this mix throughout.

The included Blu-ray holds these extras. The most open, honest one is a featurette called Toyetic, about Lightyear’s toy production. It’s also unique in exploring the process of creating these products, while selling the idea these are personal things. A general making-of runs 15-minutes. The characters earn an EPK featurette, nine minutes long. Seven deleted scenes precede a commentary featuring director Angus MacLane, director of photography Jeremy Lasky, and story writer Jason Headley.

Lightyear merely exists amid the modern animation deluge, and feels hopelessly out of creative ideas in its effort to sell toys.