Michael Cimino (Heaven’s Gate) bites off more than he can chew in Desperate Hours, an off-kilter remake of a Humphrey Bogart thriller with a star-studded cast headed by Mickey Rourke and Anthony Hopkins. Not to mention players such as Kelly Lynch and Mimi Rogers, or future stars like David Morse and Elias Koteas.

There’s an excellent movie hiding somewhere in the unwieldy plot which flies off the handle with an over-the-top finale. A taut opening hour is driven by a demented Mickey Rourke holding a family hostage. Then Desperate Hours swiftly falls apart in a tortured final act loaded with cheesy story choices and overwrought violence. What began as a slick homage updated for contemporary audiences devolves into mindless storytelling.

Escaped convict Michael Bosworth (Mickey Rourke) and his two criminal underlings are on the run. Bosworth has broken out of jail with the help of his beautiful lawyer-turned-accomplice, Nancy (Kelly Lynch). Bosworth invades the comfortable suburban home of Nora (Mimi Rogers) and Tim Cornell (Anthony Hopkins), holding them and their two children hostage as he figures out how to evade the FBI and make his way to Mexico. A fierce struggle for survival descends into chaos and violence.

Desperate Hours is fairly riveting and worth your time primarily thanks to Mickey Rourke. He clearly enjoys here playing an unhinged criminal, bouncing off Anthony Hopkins and Mimi Rogers with a kinetic performance. An engaged Mickey Rourke is a bona fide movie star.

The film’s cast is mostly great with the singular exception of Mimi Rogers, who looks out of her depth most of the time as Rourke and Hopkins lock horns. There’s a domestic angle inserted into the drama which doesn’t quite work as intended. Nora and Tim are in the process of divorce, selling their home in the process. It only muddles the movie’s themes.

The thriller has a fierce intensity in everything it does, possibly so Cimino can justify what is a mostly pointless remake. The uneven film works when it leans on noir conventions and remains a mostly grounded drama exercise focusing on the battle of two strong wills. Desperate Hours doesn’t work when it ramps up the mostly unnecessary violence and flashy action in a bid to please contemporary audiences.

Was anyone asking for a gritty remake of William Wyler’s crime classic? Probably not, but that has never stopped anyone in Hollywood. One of Mickey Rourke’s better performances is likely enough on its own to get audiences interested. Throw in a superb cast around him and what we get is a thriller in search of tighter scripting. It’s an odd combination of dazzling scenes and characters clumsily put together. 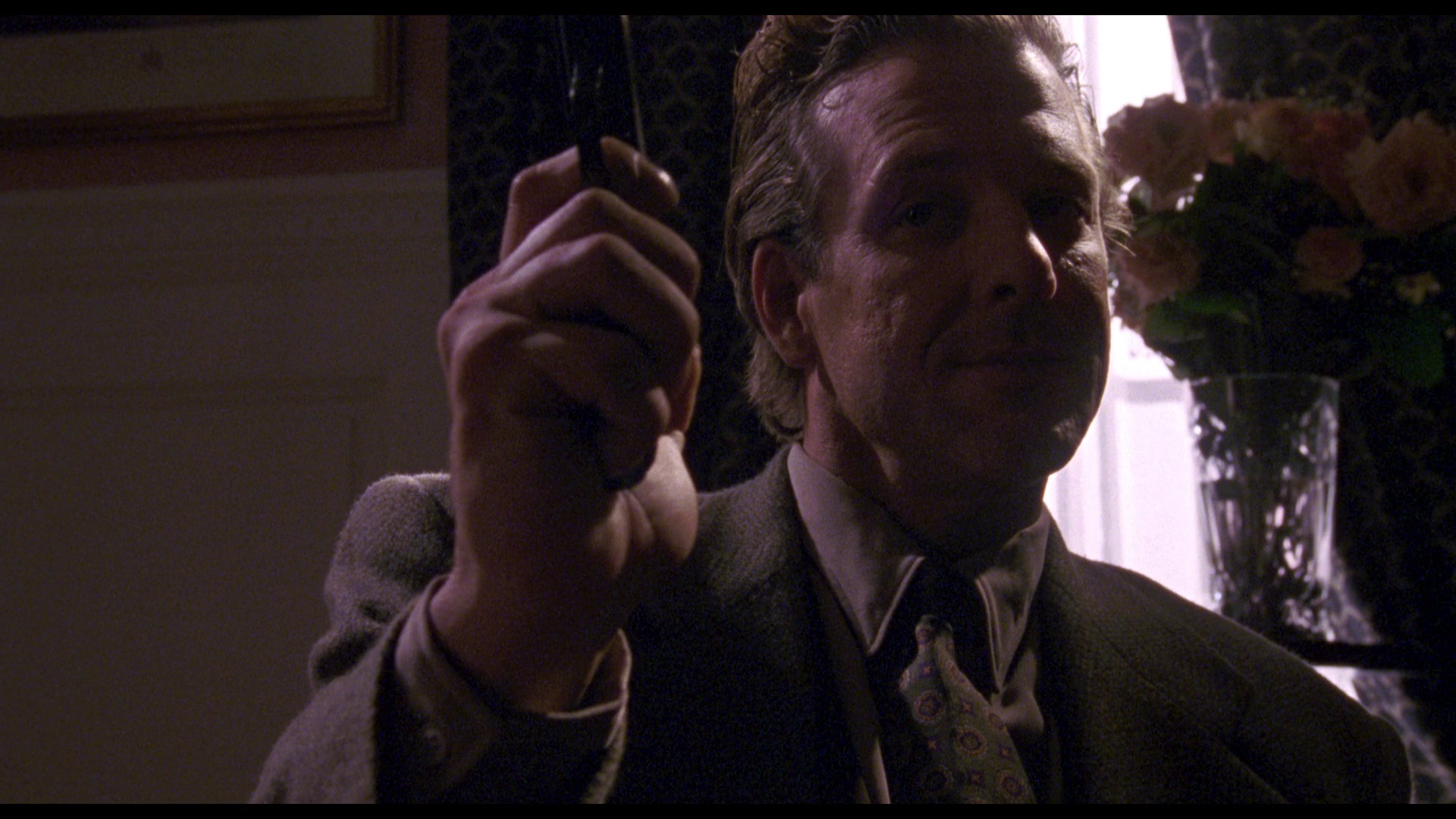 The Dino De Laurentiis production has been licensed by MVD from MGM in a pleasing film transfer with few issues. The well-made film’s 1.85:1 presentation exudes healthy fine detail and excellent definition. The elements are in prime condition. There is no visible wear or film debris. Other than a touch of minor ringing, it’s an astute scan from the camera negative struck within the past decade. The main feature runs 105 minutes on a BD-25, encoded in flawless AVC.

Grain reproduction and color tonality are consistently outstanding with perky flesh-tones and accurate saturation. The transfer hasn’t been over-processed, producing a film-like presentation with impressive clarity and detail, and is one of the better results we’ve seen from a MGM film of this period on Blu-ray.

Black levels are rarely tested outside of a few interiors. The color grading could be slightly tweaked here and there but there are no major miscues. The technical encoding differs but MVD likely employed the same basic 2K HD master found on the Shout Factory disc. There probably aren’t big visual differences between them.

Excellent 5.1 DTS-HD MA and 2.0 stereo PCM choices are your audio options. An engaging, if overwrought and melodramatic, score by David Mansfield is heard in powerful dynamics with intelligible dialogue reproduction and a bevy of crisp sound effects.

The surround nicely opens up during a couple of the bigger set pieces, including a car chase scene set in the open desert. Desperate Hours offers a cohesive mix with solid staging and effectively integrated sound design.

Optional English, French, and Spanish subtitles play in a yellow font. French 2.0 Dolby Digital stereo is the only dub option.

Desperate Hours is #41 in MVD’s throwback Rewind Collection, arriving on Blu-ray with a limited edition slipcover and mini-poster in a clear case with reversible artwork.

The 1990 movie slipped out on Blu-ray before as part of a Mickey Rourke double-feature courtesy of Shout Factory. There really aren’t big A/V differences between these two versions and the lack of new bonus features makes this disc mostly for those fans who missed out on the now out-of-print Shout Factory BD.

The disc is coded for region A.

Behind the Scenes Featurette (05:32 in SD) – A vintage featurette from the film’s release which serves more as a promotional vehicle for Desperate Hours than a sincere behind-the-scenes breakdown.

The star-laden thriller pits a mercurial Mickey Rourke against Anthony Hopkins with mixed results despite the electric performances and memorable sequences.