She’s the aspirational, world-changing Peace Corps-joining free spirit. He’s the guy from the wrong side of the tracks wearing black leather. Everyone knows how this ends up.

Dirty Dancing tweaks the Karate Kid formula, gender reversal notwithstanding, with a greater emphasis on romance. The major change is the era, setting Dirty Dancing amid a tumultuous early 1960s as social change and the Vietnam war rages in the background. In focus, the rich doctor’s daughter on a lavish dance vacation and teenage inhibitions on display. Forget that other stuff; it’s set dressing.

Patrick Swayze and Jennifer Grey sell every ounce of this story. Both exude movie star qualities, and their chemistry is infinite. Their sexually suggestive dancing titillates without betraying the soft PG-13, creating one of the 1980’s ultimate date movies. Swayze spends chunks of the movie shirtless, and Grey hides little during a practice session in a lake. Dirty Dancing markets itself easily, and it’s generational, mixing the two decades worth of music, if still selling teenage defiance at the central theme.

Grey’s character, the eponymous Baby, breaks free from her stuffy parents. It’s cliché, derivative, and infinitely predictable, but in Dirty Dancing’s simple, all white drama, she’s a catalyst for social progression. She’s shattering the stuffy 1950’s puritanism, finding herself in a coming-of-age fantasy with the bad boy who barely scrapes by. Dirty Dancing does challenge society’s norms when dealing with abortion, so this isn’t an entirely careful romantic fable. Rather, it’s decorated by pop music and swooning love that covers those difficult story beats, making them easier to digest.

The color is tremendous, the soundtrack iconic, and the schmaltz endless – that’s why Dirty Dancing lasted against countless other ‘80s romances. At least, there’s the easy explanation. Sex appeal helped too, and even with the decade’s fashion, none of that faded in the ensuing years; Dirty Dancing is masterfully cast too, pure lightning, trapped in a bottle, and transferred to film. 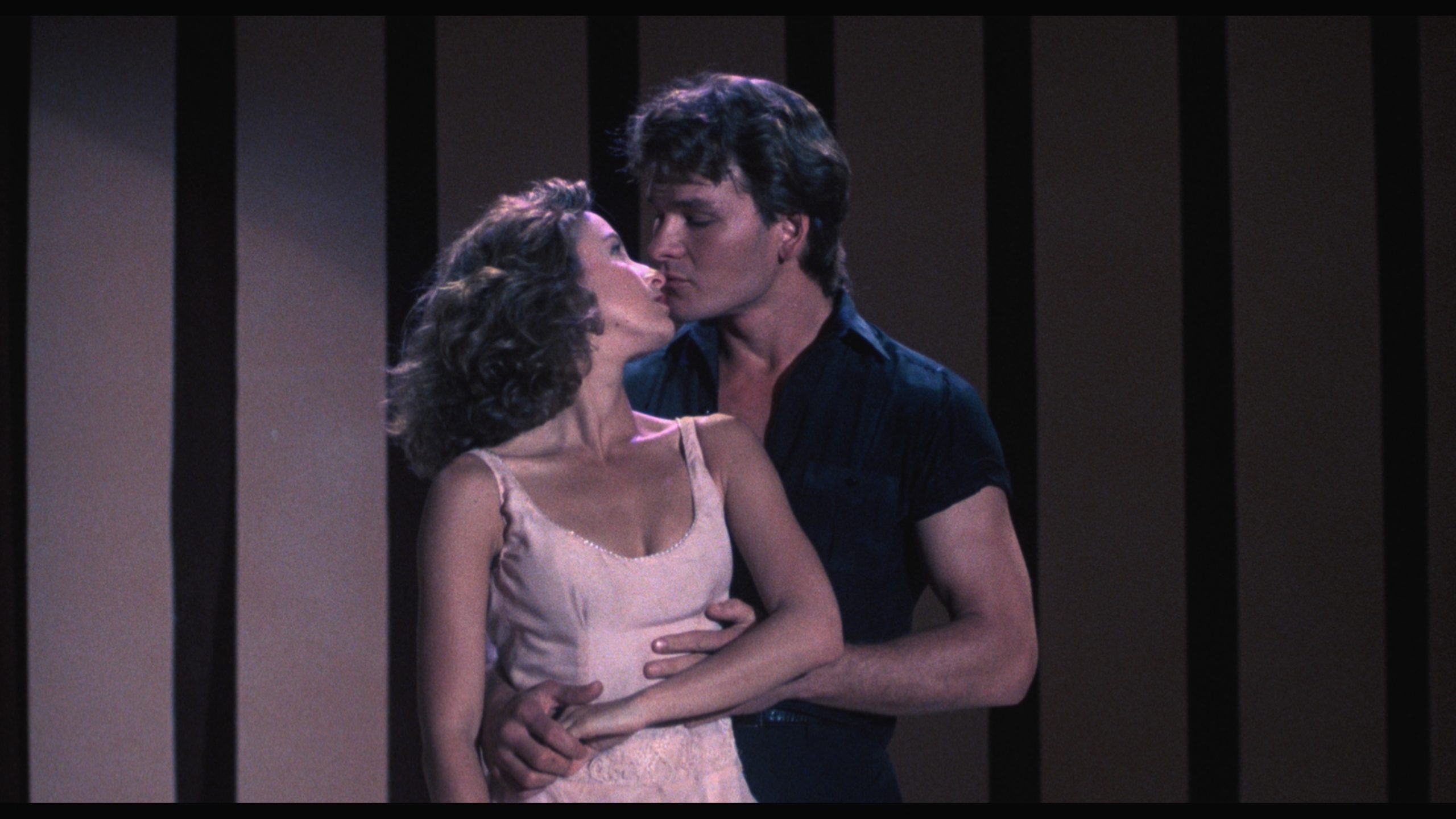 Color saturation runs high, especially flesh tones. Dynamic primaries spruce up the imagery everywhere. That’s the Dolby Vision pass at work again, and that seems to be the only work done for this disc.

Not impressive is sharpness, dulled and barely bettering the Blu-ray. A messy grain structure isn’t well resolved and bounces between clean and noisy. Definition lags, sapping Dirty Dancing of firm texture. There’s not much to see in terms of fidelity; the look is more akin to an older 2K scan, including common dust/dirt.

It’s an active Atmos remix, that’s for certain. Parties and crowds flare outward, filling the soundstage masterfully. Heights pick up the music as it echoes around the scenery. Voices and cheers take prominent positions, naturally standing out against the other ambient sounds.

Music swells the low-end a touch, hardly significant, but enough to give Dirty Dancing weight.

Over on Blu-ray, the same commentaries return. That’s followed by a retrospective made for the 30th anniversary that runs a half hour. An interview with Patrick Swayze from 2006 lasts 13-minutes, and an additional 13-minutes of excerpts follow. Bergstein discusses her role for nearly seven minutes. Brief outtakes and screen tests, four interview segments, deleted scenes, two featurettes, and music videos close this one out.

Dirty Dancing crosses generational boundaries for its music-rich romance, and it’s lost none of its power through the years.