Director Stanley Kubrick’s first attempt at showing war’s futility and barbarism wanders through WWI’s grueling trenches. Injured men prop themselves up on walls. Or, maybe they’re dead already. Those of higher rank hide, drinking booze, commanding those underneath them to charge a German encampment. It looks so pointless in its grandiosity as hundreds charge through a potted field, mortars exploding, gunfire clipping countless soldiers.

Paths of Glory begins though in luxury. A French General accepts a near impossible order to take a hill, knowing how many will likely die in a wasted effort. Another General rattles off statistics as to the death rate from gunfire, friendly or otherwise. These men exist as numbers to those walled off in marble towers. Kubrick spares them not.

Paths of Glory’s lashes out not just at the story’s events, but the entire war machine

This is a movie concerning ego and self-gratification during warfare, and it’s ruthless in doing so. The smug General Mireau (George Macready) smiles as men are condemned to die for ludicrous charges of cowardice. He’s proud. This is military order; empathy doesn’t apply. Afterward, General Broulard (Adolphe Menjou) congratulates Mireau – the execution went smoothly. They celebrate their methods with a fine meal. It’s exhausting in its blatant cruelty.

Kirk Douglas stars as the Colonel responsible for pushing his men onto the battlefield, an order refused. His movie star quality doesn’t detract, and instead offers him a power in a powerless situation. Douglas’ ability to deliver statements with indignation cements Paths of Glory’s legacy, lashing out not just at the story’s events, but the entire war machine that remained unchanged. Broulard cannot see the logical reason to defend men destined to die, one so injured as to require a stretcher strapped to the gun range’s pole; Broulard assumed this was just a power grab by Douglas.

It seems so wholly asinine, a trait which this film so readily exploits. Paths of Glory readily accepts defeat for the Privates chosen to face a court martial. The story doesn’t make villains out of the Germans, rather it takes those heartless, gutless tactics and uses them to frame the “right” side as their own enemy. In that, Paths of Glory openly notes there is no right during war, and even the purest among us are corruptible when offered power. How utterly fatalist… and powerful. 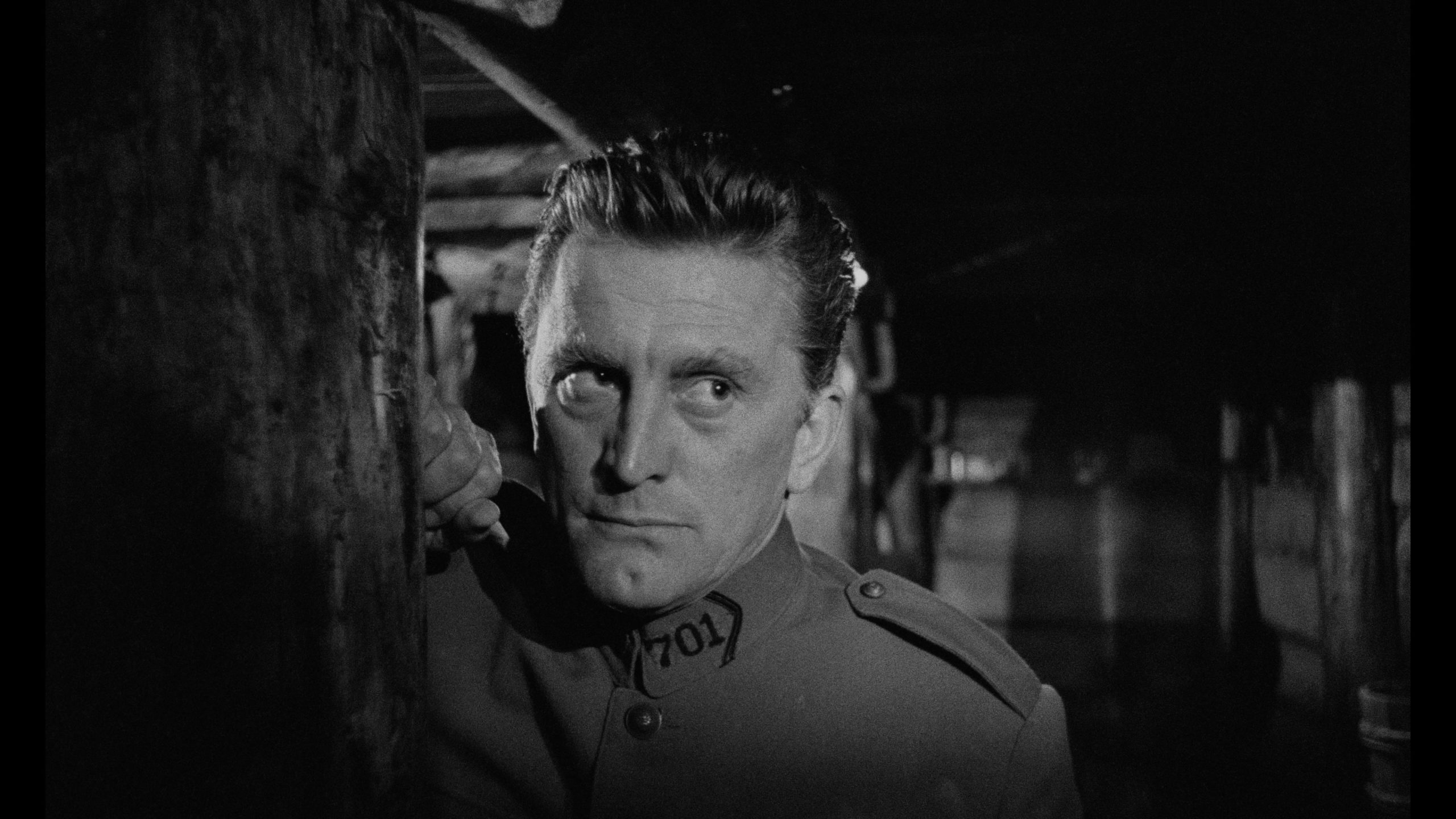 Paths of Glory looks generally spectacular on UHD. A varying grain structure shows heartiness then clarity depending on the scene. Either way, the encode can handle it, keeping things intact and true to the film stock. The print itself is nearly spotless, free from most scratches or dirt. Restoration work preserves Paths of Glory brilliantly.

Kino chooses Dolby Vision for this release. This gives the gray scale room to breathe, the occasional muddiness a rare fault. Otherwise, gains in both brightness and shadows betters the previous Criterion Blu-ray. It’s not a knock out presentation, but satisfying in keeping the material intact.

Real progress comes by way of the resolution. Fidelity streams from the screen. Facial definition is common aside from cinematography choices that diminish sharpness at the source. That’s fine as Paths of Glory isn’t processed in any way, and marvelous as a result.

While on the scratchier side from age, the DTS-HD track maintains integrity. Dialog sounds clear even with the roughness inherent to the older sound mix. Music wobbles in the upper registers, although the bass is surprisingly clean, given as much as the mono can produce.

Keep your Criterion Blu-ray if the extras matter to you (and the Blu-ray itself since this release is UHD only). Kino includes the trailer and a commentary by critic Tim Lucas and that’s all.

The following six screen shots serve as samples for our subscription-exclusive set of up to 34 full resolution uncompressed 4K screen shots grabbed directly from the UHD: