There’s a great videogame in Sonic the Hedgehog 2. Or rather, there was as this script smashes together the original Sega Genesis sequels. That means a lot happens in this movie, constantly in motion as it bounces between one action scene to another breathlessly. An audience barely has time to breathe, let alone Sonic himself.

Much of the runtime, Sonic the Hedgehog 2 qualifies as an animated film

This leaves almost no room for story, and when Sonic the Hedgehog 2 does slowdown, it’s generally pointless. A subplot about a jilted bride and government agency tracking Sonic goes nowhere. Neither even appear for the finale, forgotten bit pieces in Sonic the Hedgehog 2’s script, used for their brief humor then nothing more.

Sonic spends time trying to find his place in this world, still an alien with heroic aspirations, but also a misunderstood outsider. As if a Fast & Furious side story, Sonic the Hedgehog 2 comes down to family, finding those people who genuinely care, and understanding why they do the things they do. For a kid’s movie, that’s pertinent, and the inevitable team up delivers the ubiquitous, “everything is easier together” message.

Expanding the movie’s scope, the sequel introduces Knuckles (Idris Elba) and Tails (Colleen O’Shaughnessey), bringing these key characters into live action. Knuckles proves enjoyably brutish, and Tails still the awkward Sonic fanboy able to aid in escapes. These are not wasted roles, giving Sonic the Hedgehog 2 a break from Sonic’s own mouthiness.

The human side though, notably James Marsden, evaporates under the action. Important as Marsden was in setting up the first film, here he’s sidelined by the exhausting digital effects. Much of the runtime, Sonic the Hedgehog 2 qualifies as an animated film. Fun, energetic, and enthusiastic, but tiring for anyone other than the youngest – and at two hours, it’s probably a lot for them too. 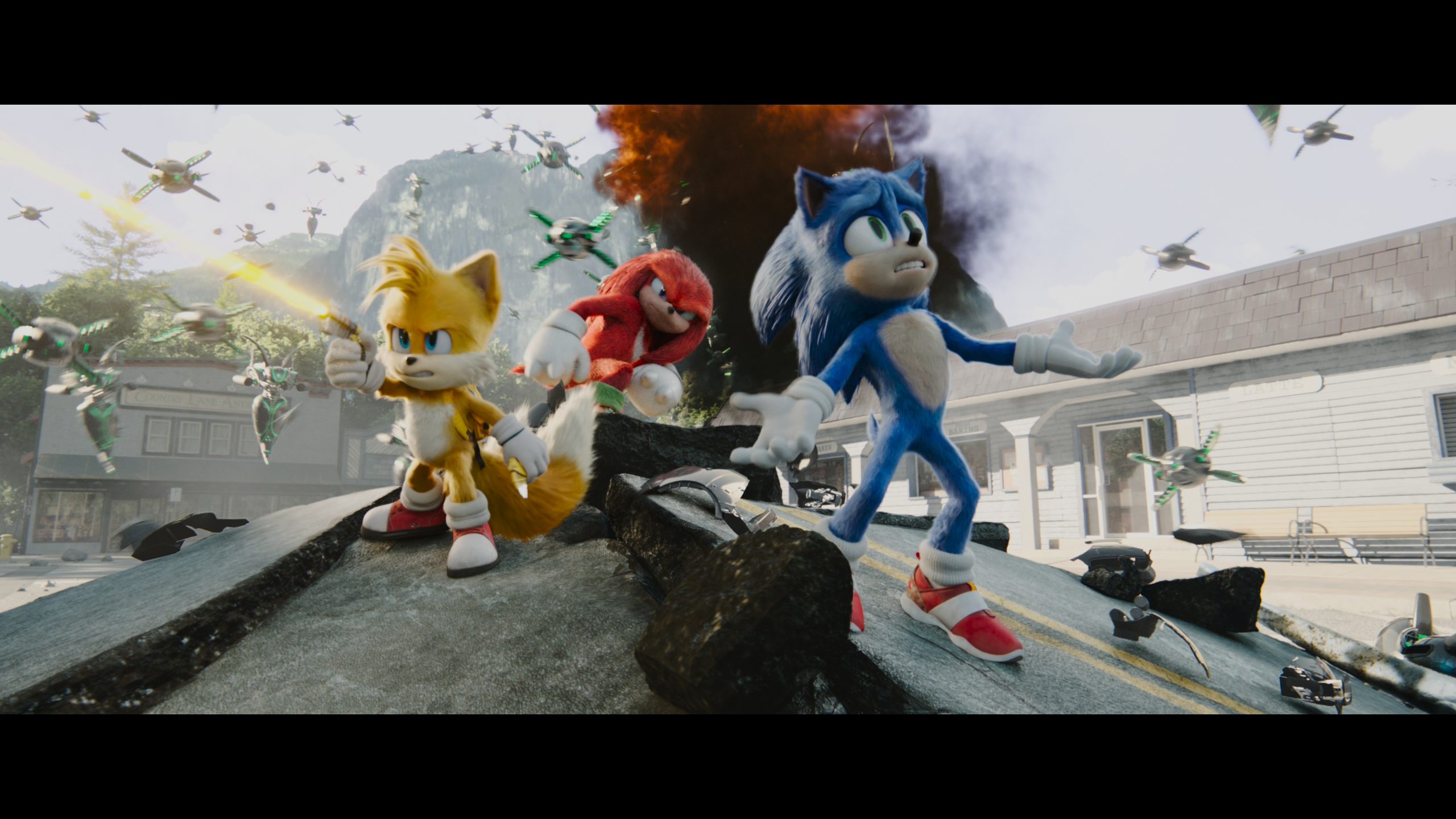 Generally clean, Sonic the Hedgehog’s digital video appears precise, clean, and enormously textured. Facial definition is stellar. Exteriors and wide shots show the same care and attention. There’s significant resolution behind this one. Oddly though, while his hair is individually defined, Sonic shows notable noise and smoothing on his muzzle. There’s even aliasing in spots (look when he parodies Risky Business early on). Quirky static noise elsewhere lowers the quality a bit too, but only in random and brief shots.

Luckily, the color can make up for a lot. Whether it’s Sonic’s blue, Tails’ yellow, or Knuckles’ red, saturation is impeccable. Beach scenery is a visual luxury. Greenery? That’s better still.

This Dolby Atmos track isn’t scared of bass, throbbing and rumbling at every opportunity. Depth hits summer blockbuster levels whether it’s Sonic hitting something, Knuckles punching, or Robotnik’s interplanetary portals igniting. Explosions take the air out of the room. Given the amount of action, this is a near constant blast fest.

Paramount only includes a UHD inside the case, and that houses all of the extras, beginning with a commentary from director Jeff Fowler and actor Ben Schwartz. A five-minute animated short tells a pointless side story. Seven deleted scenes hit 17-minutes. Three-minutes of bloopers come next. Five EPK featurettes and a music video close this one out.

Sonic the Hedgehog 2 makes for plenty of empty, hollow fun with the thinnest of purpose, but it’s enjoyable junk food.