Director Richard Fleischer had a long and interesting career in Hollywood, punctuated by rare moments of brilliance. By the time of Barabbas Fleischer had already directed such fare as The Vikings and 20,000 Leagues Under The Sea. He would go on to make such b-movie staples as Soylent Green and Fantastic Voyage. He knew how to craft a successful Hollywood movie and went for something special with Barabbas.

Barabbas was billed in its day as the first biblical epic to go beyond the life of Jesus, picking up where popular movies like Ben-Hur left off. It portrays the fictionalized struggles of the criminal prisoner Barabbas after escaping execution. The condemned man’s life was spared by the crowd in Jerusalem over Jesus, as depicted in the Gospels. The Bible and historical record are completely silent about Barabbas beyond his role in the Crucifixion.

Lagerkvist’s novel depicts a tortured man who increasingly wonders why he was spared over Jesus, haunted by guilt. Christopher Fry’s powerful screenplay has several moving scenes which delicately capture his struggles as Barabbas slowly begins seeking salvation. There’s a human component to the religious spectacle often found wanting in other such Hollywood films. A skeptical Barabbas meets the disciples led by Peter. Barabbas is not a believer and has ambivalent feelings about Christians.

There’s an intense scene meeting Lazarus, the man raised from the dead by Jesus, which sparks an indelible spiritual moment. It’s a truly engaging scene for believers, rarely topped in cinema history. Another unforgettable moment has Barabbas witnessing his former lover, now a Christian, stoned to death for her faith.

Barabbas endures a series of harsh setbacks on his journey. First trapped in a Roman prison doing hard time, then pitted as a gladiator despite his advancing age, he avoids death time and time again. It’s a spiritual journey of redemption approached earnestly and honestly by the filmmakers. The superb cast and excellent production values are the cherry on top of a well-crafted tale.

Barabbas is outstanding filmmaking, sincerely adapted from a novel widely hailed as a literary masterpiece. Anthony Quinn’s sublime performance is the rock upon which Richard Fleischer constructs Barabbas. There is a depth and spiritual connection in the film rarely matched by Hollywood, then or now. Truly underrated, Barabbas is a quietly thoughtful portrayal of early Christianity and its followers’ struggles under Roman rule. 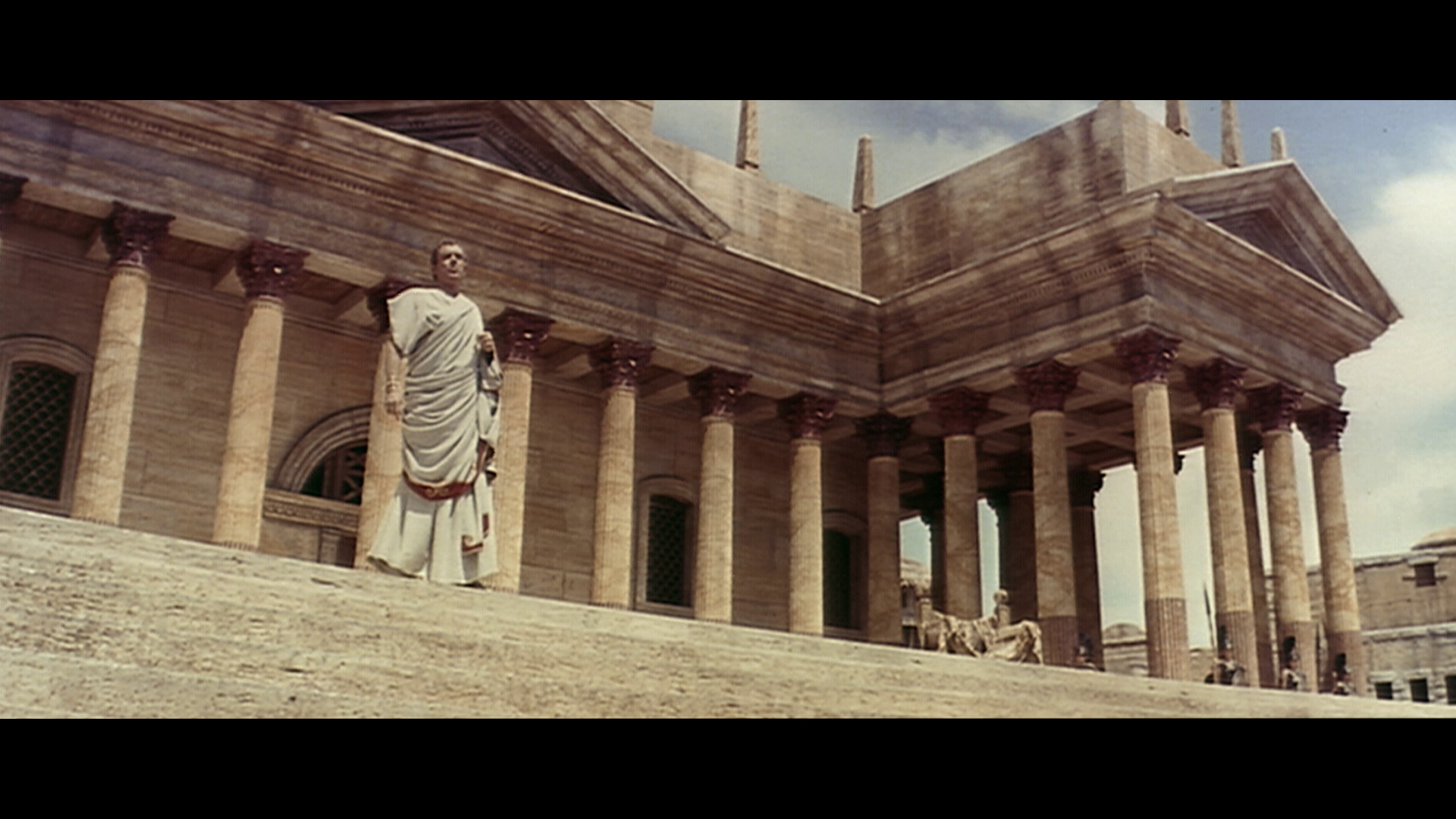 The good news is that Australian label Imprint issues Barabbas in an English-friendly Blu-ray release for the first time anywhere worldwide. The bad news is its hobbled picture quality, which barely contains any detail and definition above DVD levels. Sony controls the Technicolor film across the globe and licenses out a putrid transfer, barely worthy for HD. There are small improvements over the woeful Sony DVD but home theater owners used to lavish 4K transfers will be sorely disappointed.

It’s a completely dated scan from questionable, unrestored elements. We now understand why Sony refused issuing Barabbas themselves on BD in North America, they’ve sunk no money into its restoration. It would not shock me to find out this is the same transfer Sony first struck for DVD back in 2002.

The original 2.35:1 aspect ratio is retained in an otherwise disappointing presentation. The main features runs an uncut 137 minutes, encoded in transparent AVC on a BD-50. Grain reproduction is rough but manageable. There are no signs of filtering. The rampant softness resembles the poor image harvests produced from inferior elements and older telecine technology.

My Spidey Sense began tingling when Imprint themselves issues a disclaimer before the movie plays about employing the “best available master from the copyright owner has been used.” Barabbas should look spectacular but here it’s soft, hazy and distinctly muddy. Some ringing pops up with hints of debris in whatever elements were used. The contrast is serviceable, however shadow delineation and color saturation are sub-par at best.

The mesmerizing Crucifixion scene was filmed in stunning Super Technirama 70, shot during an actual eclipse of the Sun. Most of its true beauty and power is diminished in this underwhelming transfer.

Credit to Imprint for finally issuing Barabbas but this is a movie begging for a real restoration. There have been issues in the past updating some Dino De Laurentiis productions for Blu-ray and 4K UHD in suitable editions. Some of the blame may lie with the producer’s handling of his early films.

Imprint goes with an uninspired 2.0 PCM soundtrack in modest stereo sound. The unrestored audio fares better than the unrestored video but still isn’t anything to write home about. It’s a hissy affair with limited bottom and a boxy midrange. The orchestral score and quiet dialogue aren’t particularly affected by these limitations, but some harshness and distortion play into them.

It should be mentioned a surround track, likely based off the 4.0 Dolby Surround mix, was included on the French BD. Imprint decided to not include it.

Optional English subtitles play in a white font outside the scope presentation.

Barabbas arrives on Blu-ray courtesy of Imprint in a completely region-free edition from Australia. The single disc comes in a clear case inside a cardboard slipcase. It is #132 in Imprint’s collection. It is a limited edition release of 1500 copies.

The good news for fans is Imprint has produced new special features for the biblical epic, including an engaging commentary. Sony’s original DVD release had nothing as a bonus but a trailer which is strangely left off.

Audio Commentary by Film Historians Barry Forshaw and Kim Newman – A new joint commentary by the two men which explores the film’s cast and director among other related topics.

Richard Fleischer: Looking Back (28:12 in HD) – A decent interview with the director from a few years ago which covers his career in general.

Film Historian Sheldon Hall on Barabbas (25:30 in HD) – An excellent interview which thoroughly delves into the background behind the film, its reception and production history, breaking down its place in the parade of biblical epics.

A thoughtful and intelligent Biblical epic starring Anthony Quinn which movingly captures early Christianity through the eyes of a former criminal seeking redemption.