Downton Abbey: A New Era is a rewarding cinematic entry for the franchise’s devoted audience. The smash television drama has made a successful transition to the silver screen with two feature films now under its belt.

The award-winning show’s legacy only grows deeper in this light but crowd-pleasing jaunt. Newcomers may feel a little lost in the sprawling ensemble cast but its easygoing entertainment should please newer fans.

Downton Abbey: A New Era is a sweet and mostly well-executed concoction

The screenplay by Downton Abbey impresario Julian Fellowes borrows a bit from Singin’ in the Rain and an early Hitchcock thriller, Blackmail. Set in the early 1930s, a silent movie company has rented out the palatial Downton Abbey manner as a movie set. The Crawleys and their erstwhile staff learn to deal with the glitz and glamour of the film crew and its Hollywood stars. Unfortunately for the filmmakers, their plans are thrown in disarray when newfangled “talkies” take over the box office. Look out for Lady Mary making unexpected contributions when the movie’s director needs her.

While some of the Crawleys remain home dealing with the film production, other family members go on an adventure to the South of France when the elderly Dowager Countess (Maggie Smith) mysteriously inherits a villa from a man only she remembers. It’s quite fun seeing the cast outside the English countryside for once, basking in the beautiful seaside locale. Red herrings aside, it’s an excuse for the cast to work their magic in an exotic setting and meet new people.

Packed with a bevy of touching character moments, humor, and even a little sadness, Downton Abbey: A New Era offers slightly different joys than the long-form development and finely-tuned characterizations realized by the television series.

The movie is more a culmination and celebration of Downton Abbey’s beloved cast, with knowing winks to the audience, than the same mannered storytelling of its television predecessor. Whittling down this many characters into two hours is a nigh impossible task which director Simon Curtis mostly pulls off. A few hiccups are inevitable in a breezy plot designed for fans already familiar with all these characters.

Sprawling and safe, this is comfort food for the show’s fans. A wedding, a death, and a surprise proposal are the big events with a couple of cheap head-fakes thrown in for good measure. Downton Abbey: A New Era is a sweet and mostly well-executed concoction, though one dramatic goodbye to a long-time favorite may produce a few tears. 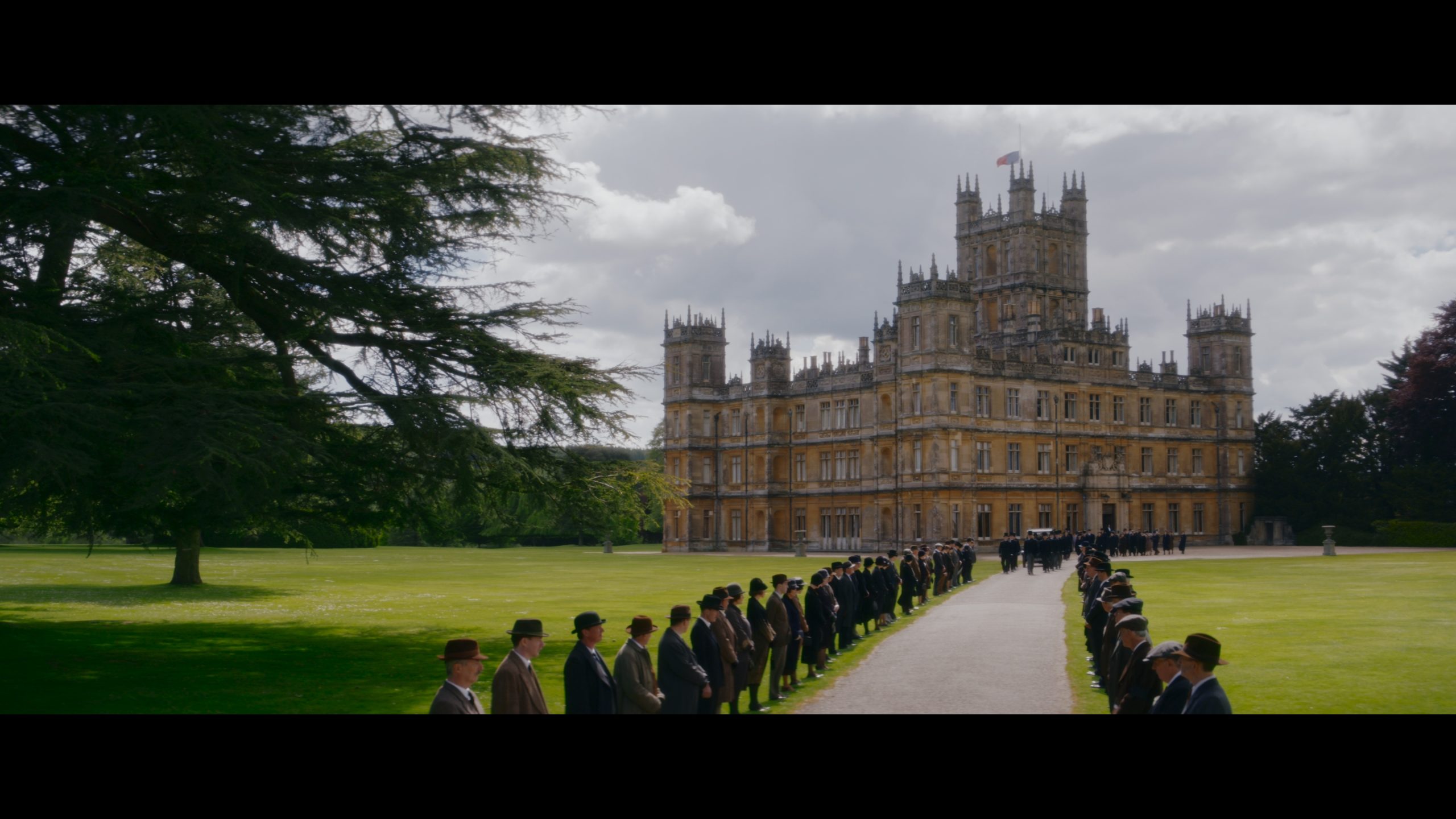 Downton Abbey’s previously austere cinematography is considerably changed for A New Era. Filmed in 6K video using Sony’s impressive CineAlta camera, Universal has produced reference-quality and flawless video. Some may consider it a bit sterile and “too digital” for a period flick, but there’s no denying the remarkable picture quality. The unfiltered detail is unreal, revealing just about every inch of the period wardrobe.

The UHD’s 2.39:1 presentation offers amazing depth in pristine clarity. Truly breathtaking visuals, especially as the movie moves to the South of France, pop with insane definition. The scenic imagery takes full advantage of the HDR10 and Dolby Vision encodes.

The Dolby Vision’s improvements are subtle but abundant, refining the color palette’s dimmer tones and enhancing the shadow delineation. The 2160p video absolutely dazzles with its perfect digital capture.

Universal has sunk a good chunk of money into its beloved Downton Abbey franchise and the production values are top-notch. Downton Abbey: A New Era is replete with eye candy for videophiles. This is now one of the best-looking UHDs available.

Like the first movie, Downton Abbey: A New Era receives a prim and proper Dolby Atmos mix which favors realism and well-mannered immersion over flashy channel placements. The orchestral soundtrack and dialogue are impeccably presented in the soundstage. The period drama doesn’t lend itself to overwhelming LFE but the subwoofer helps contribute in a few necessary spots.

There’s a gentle, immersive atmosphere. Height channels don’t play a huge role in the mix outside of the boat scenes and one dramatic moment. What does play is a tasteful, elegant surround mix with a natural character. There’s a wonderfully detailed underbed of natural-sounding environmental noises.

The nice thing here is the inclusion of all special features on the UHD, actually presented in legitimate 4K video with Dolby Vision. It’s a nice surprise which I hope becomes more common. The special features are cute and mostly charming, if a bit light on substantial behind-the-scenes notes.

Good to Be Back (03:38 in UHD) – The cast is happy to be back at the estate and making their next film. Hear what it was like for them to see one another again and learn about their character’s continuing story arcs.

Return to Downton Abbey: The Making of A New Era (11:37 in UHD) – This in-depth making-of piece delves into the work that each department contributed to bring this film to life.

A Legendary Character (04:10 in UHD) – Take a look back at the legendary character that is the Dowager Countess of Grantham and see why Maggie Smith was born to play the role.

Creating the Film… Within the Film (09:26 in UHD) – Take a deeper dive into the making of the film within the film, highlighting the extra research and details that were taken into consideration, from set design and vehicles to the plethora of period-accurate film equipment and props.

Spill the Tea (Time) (02:23 in UHD) – Sit down with Allen Leech (Tom Branson) and Laura Carmichael (Lady Edith) as they spill all the details of what life on the set was like.