The first memories discovered in Joel Barrish’s (Jim Carrey) mind are negative ones. The fights, the arguments, the loss in a broken relationship. Those images buried what came before.

Eternal Sunshine of the Spotless Mind is unusual in form, even psychedelic, yet alluringly smooth in depicting the way human emotions drift, and how we so easily forget those things that make us happy. Trying to avoid grief and anguish only makes it more grueling.

Barrish’s case is one born of sci-fi, however nominally. He seeks out a memory erasing procedure to delete a failed romance from his brain, the anguish too overwhelming to handle on his own. But Clementine (Kate Winslet) is there. She’s always there, somewhere, wandering through Barrish’s mind in fractured images, fleeting glimpses of what he loved. Eternal Sunshine ruminates on the impossibility of letting go wholly, how those we meet and cherish forever remain in our heads.

Rather than the brain scans and computer imaging that allow Eternal Sunshine to utilize such a frazzled visual structure, the true catalyst is love. Eternal Sunshine is a whole romance, replayed in reverse, then restarted. Cassette tapes become a plot point late in the third act, the romantic metaphor capturing the past, locking it away, only to replay/rewind as wanted – or maybe needed.

Side characters play their part in this examination of love, like Patrick (Elijah Wood) so desperate, so lonely, he steals Barrish’s past to connect with Clementine, burying his true self just for a chance to feel connected. The interplay feels utterly genuine, authentic, and still cinematically creative. Conceptually, Eternal Sunshine’s new millennium flair date this drama, yet the ideas and inherent truth allow this film permanence.

Carrey and Winslet are brilliant together, flawless casting in an actor-focused story that demands a convincing chemistry. They sell these ideas and their credibility as a couple. If either of those slips, Eternal Sunshine falls apart. Luckily, they flourish and this movie became a classic. 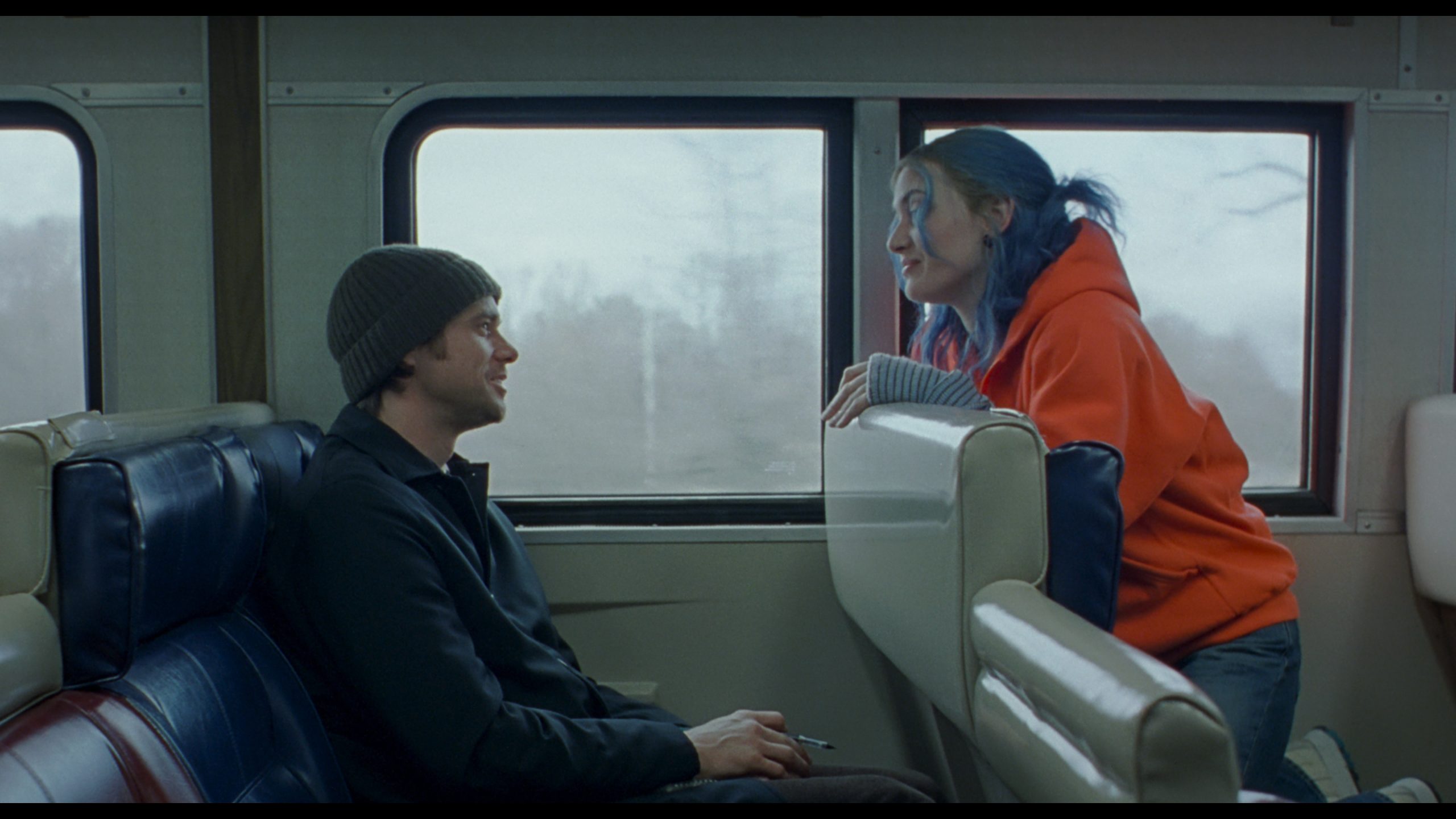 Kino’s disc represents Eternal Sunshine as shot, backed by a new 4K master. It’s not that invigorating. Dull detail at best reaches a middling peak. Blame that on what looks like excessive processing, keeping the grain low and mushy. This doesn’t look natural. Watch Elijah Woods’ first appearance – grain sticks to his face. Other suggestions as to the issues include color, poor gradients abound, including on flesh tones. Facial detail disappears as a result.

Other elements are clearly natural to Eternal Sunshine, photographed like a shaky home movie or hazy memory. Frequent ringing and halos appear on contrasting surfaces. Grain spikes look akin to 16mm via the rougher film stock. The encode itself appears fine.

New color grading (and Dolby Vision) toys with the decidedly early ’00s palette, digital blues and oranges plain. Dusty black levels mirror the intent from a lesser film stock, and highlights make almost no gains from this format. There’s little to no visual zest to see.

DTS-HD 5.1 gives the score prominence, elevating the quieter dialog scenes to give them additional heft and meaning. Eternal Sunshine carries boldness unusual to a low-key romance, even as the soundstage stays wholly plain otherwise. Carrey’s voice will swirl around the room as he goes through the memory process, sweeping through the rears rapidly.

Bass isn’t a factor outside of a few loose moments during memory sequences.

Kino loads Eternal Sunshine with Universal’s original extras. The opener is a commentary from director Michael Gondry and writer Charlie Kaufman (the only bonus on both discs; the Blu-ray has the rest). Three interview segments, a strong making-of, scene breakdown, deleted/extended scenes, and a featurette on Gondry fill the Blu-ray.

Eternal Sunshine of the Spotless Mind

An ode to grief and love, Eternal Sunshine of the Spotless Mind remains an eccentric, clever classic.