A portly single mother steals the show in director Ayumu Watanabe’s sweet Fortune Favors Lady Nikuko. The heartwarming anime movie is a coming-of-age tale about a daughter struggling to accept her brash single mother. Producing laughs and even a few tears, the entertainingly animated film sends the right message even if its canny cultural humor from Japan may fly over the heads of some Westerners.

Director Ayumu Watanabe has learned a thing or two since making Children of the Sea, which was more flash than substance. Fortune Favors Lady Nikuko offers a grounded narrative with relatable characters and a simple slice-of-life charm.

Gleaming with love and charm, Fortune Favors Lady Nikuko is a heartfelt movie with a few eccentric touches

Kikuko is still finding her place in the world as the first pangs of puppy love emerge for a classmate, Ninomiya. The young tomboy is embarrassed by her mother Nikuko, a bold woman with personality and spirit. The chubby mother loves Japanese puns and other silly jokes, but no one questions her deep love for Kikuko. Arriving as a newcomer in a small harbor town, Kikuko navigates the social politics of middle school as she learns a deep secret about her own family.

Fortune Favors Lady Nikuko is lovingly animated by STUDIO4°C (Tekkonkinkreet, Mind Game) with stylish flair. There are little homages to Studio Ghibli and other anime classics among the often cartoonish techniques used in the designs and animation. The joyful animation has fun with itself, playfully employing the medium. Which doesn’t take anything away from the often gorgeous backgrounds with peaceful Japanese imagery.

The movie can be quite touching and tender when it wants. It’s a smart blend of comedy and drama, a character-driven piece with the lovable Nikuko leading the way. The narrative opens with her horrendous dating history and bad luck with men, but her personal failings only help endear the audience.

Nikuko is a bundle of energy, always quick with a gag or making bad jokes. She delights in weird humor like puns which only make sense in Kanji. She’s also a huge eater and Ayumu Watanabe serves up more dining scenes than I can remember in one anime film.

Gleaming with love and charm, Fortune Favors Lady Nikuko is a heartfelt movie with a few eccentric touches, expanding its fairly trite self-discovery message well beyond the regular anime market. 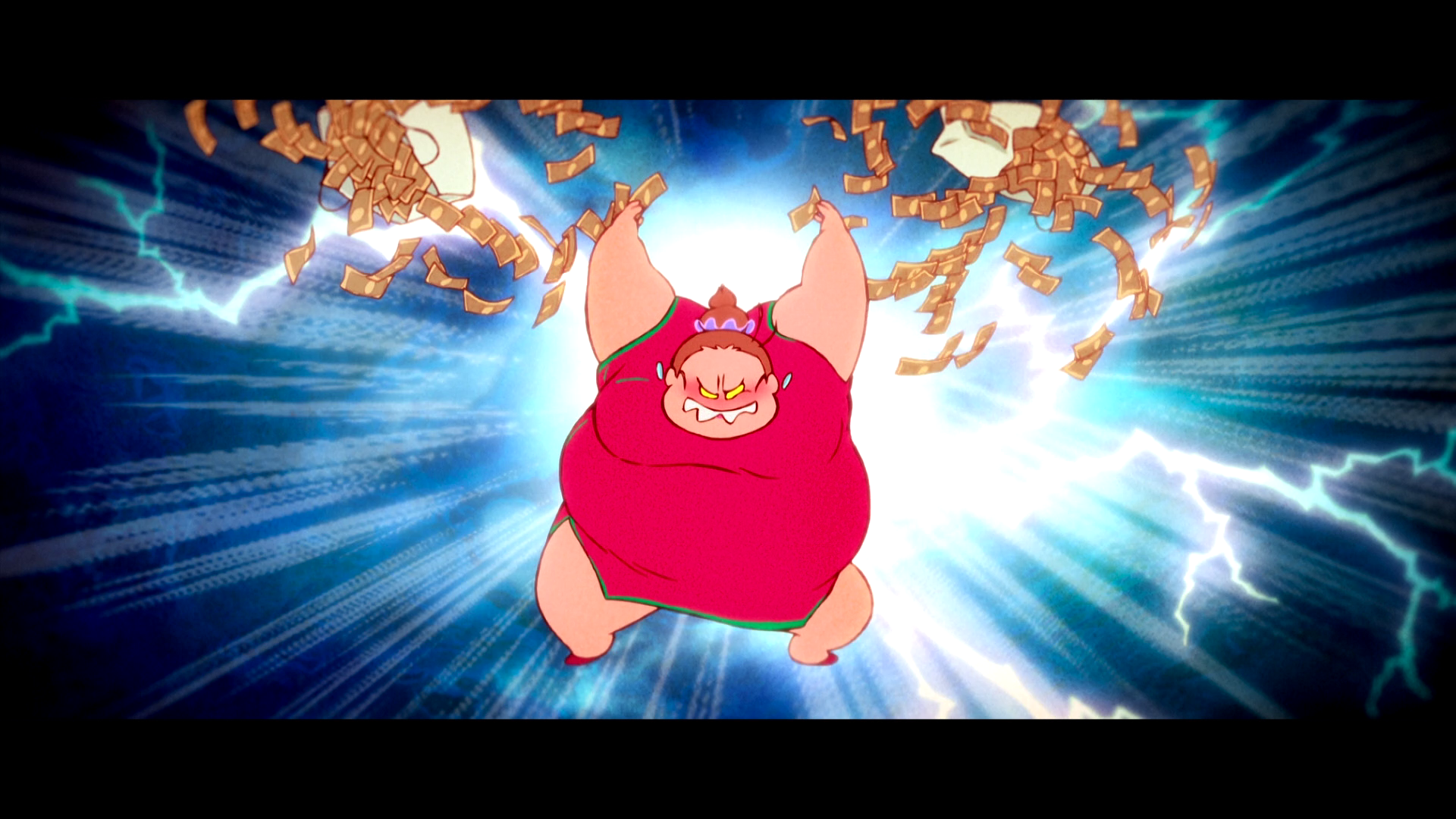 Kenichi Konishi is on board as the chief animation director and character designer for this project from Studio 4°C. The movie is some of their best work yet, a quirky but well-managed aesthetic with detailed backgrounds and smooth movement. This isn’t quite demo material but the movie fits neatly alongside other recent anime movies in scope and video quality.

The main feature runs 96 minutes on a BD-50, encoded in high-bitrate AVC. It’s a flawless encode with no banding, always a possible issue for new anime with such colorful designs. Black levels are perfect with an even contrast and consistently fantastic saturation.

The 5.1 DTS-HD MA Japanese soundtrack is a delight, actively engaging with realistic atmosphere and crisp fidelity. Nikuko is voiced by esteemed Japanese actress Shinobu Otake and newcomer Cocomi voices Kikuko, Natsuki Hanae has joined as Ninomiya, and Hiro Shimono as the lizard and gecko.

Dialogue is always cleanly rendered within the expansive dynamics and quirky score. There’s a touch more bass than most anime productions but isn’t a subwoofer showcase.

Immersive cues are limited but nicely worked into the mix, highlighted by a bonkers opening which details Nikuko’s troubled dating history in vivid style. The polite fall of rain subtly lands around you in the soundstage. A gentle instrumental score helps manage the mood.

Optional English and Spanish subtitles play in a white font, inside the scope presentation. No English dub audio is included.

Fortune Favors Lady Nikuko arrives on home video in a Blu-ray/DVD combo package courtesy of GKIDS, distributed by Shout Factory. A slipcover is available in first pressings. The BD is coded for region A.

All bonus features are in Japanese with English subtitles provided. It’s a surprisingly in-depth assortment with a lengthy behind-the-scenes documentary and multiple interviews from the producer, director, and primary cast. A lot of fun is had in the group appearances since the producer was once married to the voice actress for Nikuko.

Making Of Fortune Favors Lady Nikuko Documentary (72:25 in HD) – This extended feature goes heavily behind the scenes into the recording process for the voice actors. Producer Sanma Akashiya and director Ayumu Watanabe are prominently featured as they deal with the voice cast.

Film Completion Press Conference (26:54 in HD) – Cast and crew take questions from the audience in a funny, relaxed discussion on 5/26/2021.

A cute, poignant story with endearing characters that marches to its own beat about a quietly thoughtful daughter and her brash, outlandishly jovial mother.